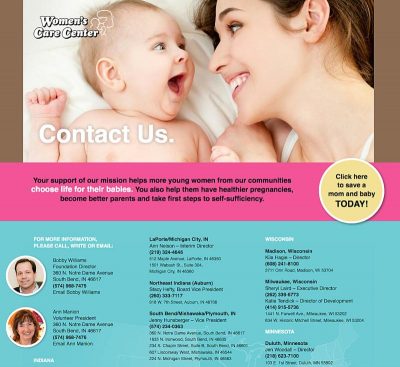 This is a screen grab from womenscarecenterfoundation.org. (CNS photo/Women’s Care Center Foundation)

SOUTH BEND, Ind. (CNS) — The Women’s Care Center, a nationwide network of pregnancy resource centers that began in 1984 with one location near the University of Notre Dame’s campus, has been named the recipient of the 2019 Evangelium Vitae Medal bestowed by the university’s Center for Ethics and Culture.

The recipient is announced annually on Respect Life Sunday, which this year was Oct. 7. The award, comprised of a specially commissioned medal and $10,000 prize, will be presented at a Mass and banquet April 27 at Notre Dame.

“The Women’s Care Center sets the standard nationwide for compassionate and comprehensive care for mothers, babies and families,” said O. Carter Snead, the William P. and Hazel B. White director of the Center for Ethics and Culture.

“In its work and witness, the Women’s Care Center embodies the unconditional love and radical hospitality that anchors and sustains a culture of life. It is our privilege to honor them with the Evangelium Vitae Medal,” Snead said in a statement.

He added: “The WCC provides compassionate, nonjudgmental, loving care to women most in need. They are a beacon of hope — here in South Bend and in every community they serve.”

Ann Manion, volunteer president of the Women’s Care Center Foundation, said the center is “grateful to the University of Notre Dame for including us” among its “heroes of the pro-life movement.”

“On behalf of our counselors, nurses, sonographers and the entire Women’s Care Center family, we are deeply grateful for this recognition, which will advance our life-saving mission to pregnant women in 11 states,” she said.

The 2018 Evangelium Vitae Medal recipient was Mary Ann Glendon, the Learned Hand professor of law at Harvard Law School and former U.S. ambassador to the Vatican.

NEXT: Texas dioceses will release names of clergy credibly accused of abuse