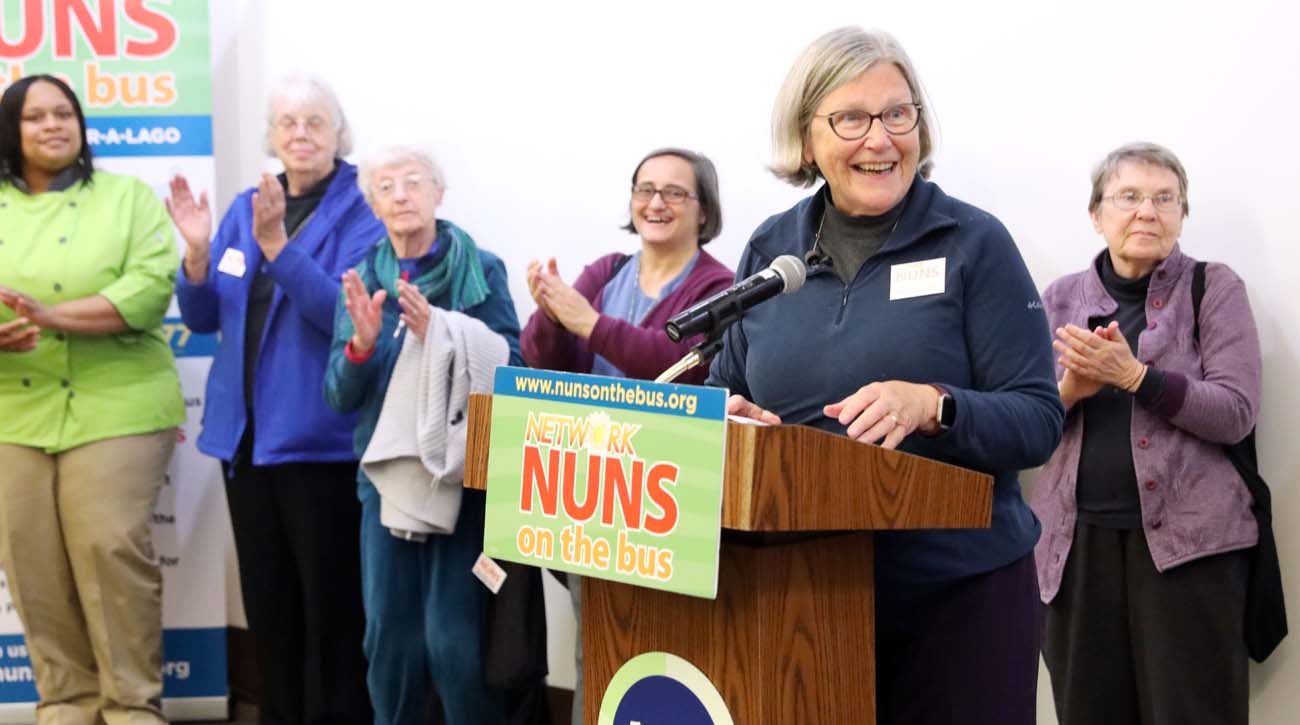 CLEVELAND (CNS) — Franciscan Sister Janice Cebula isn’t one to turn down a chance to learn and be inspired.

So when Network, the Catholic social justice lobby, decided to take its Nuns on the Bus campaign on the road again beginning Oct. 8 to call attention to the 2017 Tax Cut and Jobs Act and its impact on social services and local communities, she readily agreed to join one leg of the trip.

Sister Cebula, president of the Sisters of St. Francis of Clinton, Iowa, told a rally at Lutheran Metropolitan Ministry in Cleveland Oct. 20 that she has not been disappointed since joining the Tax Justice Truth Tour five days earlier in Omaha, Nebraska.

“You meet a lot of people who understand that we are all sisters and brothers,” she said to applause from about 100 people. “And they act like it. We saw a lot of on-the-ground, really innovative programs that are integrative in addressing the whole person.”

But she said she feared some programs and families may be endangered by possible future cuts in federal spending in response to the tax law.

Beginning in Santa Monica, California, the tour was to wind through 21 states before ending near President Donald Trump’s Mar-a-Lago Club in Palm Beach, Florida, Nov. 2.

Sister Simon Campbell, a Sister of Social Service and executive director of Network, said the Palm Beach locale was chosen to demonstrate to the president and Congress that the tax cut law will add up to $1.9 trillion to the federal deficit in the next decade, and that planned cuts in federal spending on nonmilitary programs will harm the lives of low- and moderate-income people.

Sister Cebula told Catholic News Service she was particularly impressed after hearing from five women who are part of Lutheran Metropolitan Ministry’s Chopping for Change program. The women are nearing release from prison and under the program they are learning culinary and management skills at the Comeback Cafe at the Virgil E. Brown Center, headquarters of the Cuyahoga County government.

Chopping for Change is a partnership with the Ohio Department of Rehabilitation and Correction and the Cuyahoga County Office of Reentry. It is designed to train women with marketable skills for Northeast Ohio’s burgeoning local food scene.

Tomika Daniel, 41, one of the women, manages the cafe and told CNS that she expects she will be able to find work when she is released from prison in June.

“With the support I’m getting, I don’t have to walk with my head down,” she said.

The two-year-old program has welcomed 89 women; 40 have been released from prison and gained employment. Lutheran Metropolitan Ministry reported no recidivism among the women.

The bus tour was meant to call attention to the potential negative impact of the tax law on social programs, explained Sister Campbell, who planned to complete the entire 54-stop tour. She called for “reasonable revenue for responsible programs.”

“The message is that this tax legislation gives away money to those at the top who don’t need it. And now Congress is planning to take away services from everybody else,” she said.

Congressional supporters of the tax law said that it would be a boon for business and generate new revenues for the federal government over the course of the next decade.

Maria Smith, a member of St. Patrick Parish in Cleveland, joined the rally, holding a sign with Network’s signature call. She expressed concern for what she called the country’s misplaced priorities toward increased military spending and decreased spending on vital human needs.

During a stop at St. Frances Cabrini Parish in Tucson, Arizona, Oct. 11, a crowd of 200 people greeted the bus. Each person was invited to sign a pledge card to contact local elected officials about their concern about the fallout of the tax cut bill and then to sign the bus in the parish parking lot.

“Then, it’s no longer just about the Nuns on the Bus. It’s everybody,” Sister Campbell told those gathered.

Salvatorian Father William Remmel welcomed the 10 sisters on the bus, stoking the crowd when he said “systems need to be held accountable and that the tax reform law “isn’t just bad politics, it’s bad theology.”

Earlier in the day, the nuns stopped at the office of Rep. Martha McSally, R-Arizona, who was in a tight race for a U.S. Senate seat. McSally supported the 2017 tax cut law and Sister Campbell said that in a meeting with a legislative aide it became clear that the congresswoman would not be changing her position in the future.

Contributing to this story was Michael Brown, managing editor of Catholic Outlook, newspaper of the Diocese of Tucson.