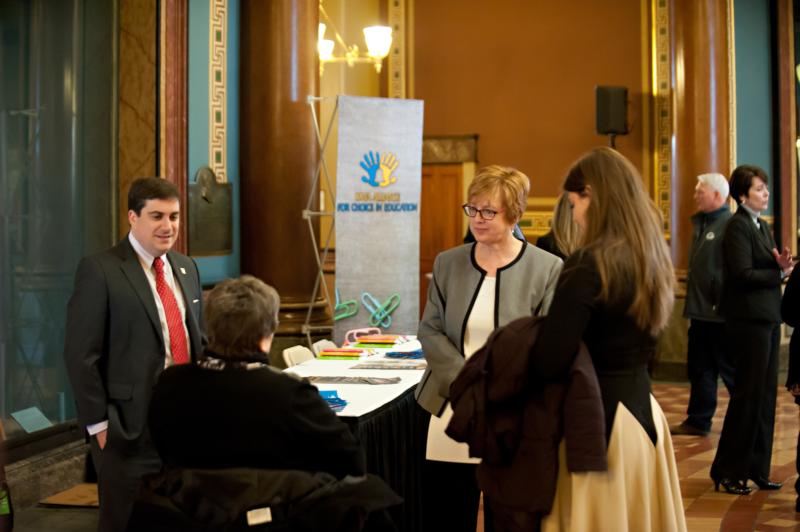 Trish Wilger, second from right, executive director of Iowa Alliance for Choice in Education, talks with other school choice advocates in early April at the Iowa Capitol in Des Moines. The Internal Revenue Service is proposing a rule change that would impact about 30 percent of the student population in Catholic schools in the Archdiocese of Dubuque and thousands of others in nonpublic schools in Iowa and other states. (CNS photo/courtesy Iowa Alliance for Choice in Education)

DUBUQUE, Iowa (CNS) — The Internal Revenue Service is proposing a rule change that would impact about 30 percent of the student population in the Catholic schools of the Archdiocese of Dubuque, as well as thousands of others attending nonpublic schools in Iowa and other states.

The alteration being considered, which was announced publicly Aug. 23, would reduce School Tuition Organization donation deductibility on federal tax returns for individuals who itemize their deductions.

This could make it harder for these organizations, known as STOs, to raise charitable donations, which, in turn, could mean less tuition aid available for low income families.

“It’s a result of the new tax law,” explained Kim Hermsen, superintendent of schools for the Archdiocese of Dubuque. “There are some states trying to find workarounds. There’s really an unintended consequence.”

In 2017, Congress passed the Tax Cuts and Jobs Act, under which itemizers can deduct $10,000 in state income and property taxes. Although the law included an increase in child tax credits, the reduction in the state and local tax deduction, known as SALT, proved to be a disadvantage for some “high tax” states. In response, these states reclassified some of their taxes as charitable donations, which provoked the proposed counter measure from the IRS, according to officials.

“It appears the IRS is trying to fix a loop hole in some states,” Hermsen told The Witness, Dubuque’s archdiocesan newspaper.

“Essentially, (under the proposed rule change) deductibility is going down by 65 percent,” said Jeff Schneider, assistant development director for the archdiocese.

The period for official public comment to the IRS and Treasury Department closed Oct. 11, but the proposal would not actually go into effect until after a public hearing in November. As a result, school choice advocates, like Tom Chapman, executive director of the Iowa Catholic Conference, are pushing for an exception for STOS from the rule change.

Trish Wilger, Iowa ACE’s executive director has been engaging with legislators as much as possible since the proposal was unveiled.

“Decreasing the federal deductibility for an STO donation from 100 percent to 35 percent could cause donors to reduce their donation amount or not donate to an STO at all,” Wilger said. “If STOs can’t raise funds because of this regulation, they won’t be able to give out as much in tuition grants, and fewer children will be served.

“STOs were created to help lower-income and working-class families, not to circumvent the newly enacted cap on SALT deductions. If STOs are not excepted from this regulation, it is children who will suffer; we can’t sit back and let that happen,” she added.

STOs were enacted in Iowa about 10 years ago as a way for private donors to support nonpublic schools. The bipartisan legislation carved out state tax credits for the people and businesses that donate.

Under existing IRS rules, STO donations are 100 percent deductible. Each STO gets a limited amount of tax credits and must raise money by Dec. 31 each year. Donations are then distributed to students whose family income falls at or below 300 percent of the federal poverty line. A total of 10,752 students in Iowa benefited from STO grants during the 2017-2018 school year. There are 12 STOs operating in the state.

In the Archdiocese of Dubuque, the STO has the ability to raise up to about $5.2 million per year under current regulations.

“This (IRS rule change) has the potential to impact 3,200 kids just in our archdiocese,” said Jeff Henderson, director of development for the archdiocese. “That’s a lot of kids. And this is about helping those families being able to send their child to the school of their choice regardless of income.”

The IRS change would affect the amount many could afford to give and how they may choose to give to make the most of their charity, according to Hermsen.

“People give to our STO first and foremost for the love of Catholic education,” said Hermsen. “But many people have limited charitable dollars.”