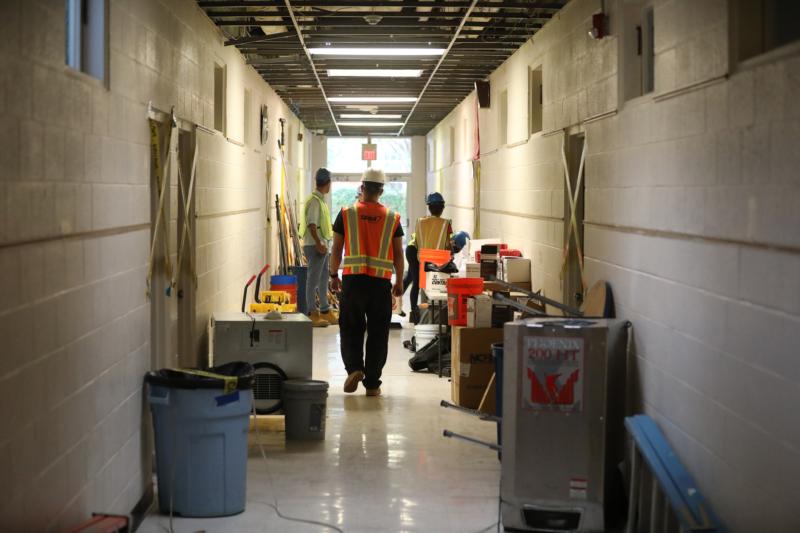 Restoration workers are seen Sept. 28 in Wilmington, N.C., in a hallway at St. Mary School, which sustained significant damage from Hurricane Florence. It is the first Catholic school in North Carolina. (CNS photo/Bob Roller)

It’s the type of place where roads are brick, window frames are wooden and the school auditorium, known as the “upper room,” was built in 1871. But, since Hurricane Florence made landfall Sept. 14, it’s also the type of place where water was trapped behind wallpaper, roofs sustained structural cracks and property suffered extensive flooding.

That monetary assessment is conservative, according to Richard Wilkins, a parishioner who is leading the restoration effort at St. Mary School and its parish church, the Basilica Shrine of St. Mary.

The storm spared no building on the church-school campus, although some properties were less damaged than others. The Tileston Building, which houses parish offices, outreach projects and the upper grade classrooms, took much of the damage. It will be off limits for about six to eight months, Wilkins estimated.

As of Oct. 2, the school’s 209 students had missed 16 instructional days. St. Mary School closed Sept. 11, a few days ahead of the storm, to give families time to evacuate the area.

A number of school families were displaced because of the storm. As the school worked to reopen its doors Oct. 4, development director JoAnn Daley said outreach to those displaced families is already happening, and is expected to pick up as more people return to the area.

“I don’t know that we know the magnitude of what people need until people are able to come back to us,” Daley said Sept. 28.

Daley has lived in Wilmington for 30 years, and been a part of the St. Mary community for 20. Her son graduated from the school. “I have been through a lot of storms. My neighbors who have lived in their houses for 50 years have said they have never experienced the magnitude of damage (that Florence brought),” she said.

Father Ryszard Kolodziej, pastor of the basilica and school, chose to remain on campus rather than evacuate. He was the first person to experience the storm’s impact there. On the morning of Sept. 14, he heard a chimney collapse in the rectory, his home, and looked out the window to see the water rising at a high speed.

“The whole property looked like a huge lake,” he said.

When he felt it was safe, Father Kolodziej took containers, such as trashcans, to the buildings to try and collect leaking water. He mopped the floors. The priest, Wilkins said, was “the bucket brigade.”

But there weren’t enough containers. It was impossible for Father Kolodziej, who once lived through a typhoon in Japan, to control.

Today, as restoration continues, he said his prayers are with his parishioners and that his gratitude is with all those generously helping the effort. He’s confident that the community will emerge stronger.

With the school’s Oct. 4 reopening, all students will attend classes in the building once reserved for the lower school only. The cafeteria will be divided into three classrooms and special classes, such as art, will be “on a cart” and occur within homeroom classrooms.

The building that students will return to recently passed air quality tests, a welcomed result for those working on the project.

For the returning students, one important sight will be their playground, which is open and shaded by what’s known as the “boundary oak,” a tree that survived the storm, dates back to the late 1700s and marks the city’s eastern border.

“We’re the oldest Catholic school in the state. And the best. And we are going to survive,” principal Joyce Price said with a smile. “I have asked my teachers to return with faith, optimism, compassion, flexibility, kindness, patience and a sense of humor. We have a highly skilled staff who will rise to the occasion and make this plan work.”