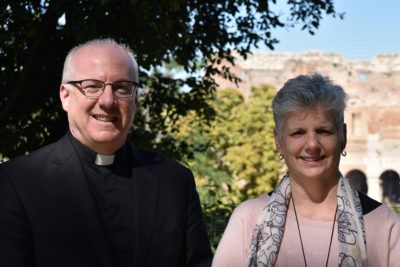 Msgr. Joseph Reilly, rector and dean of Immaculate Conception Seminary School of Theology, and Donna Orsuto, director of The Lay Center in Rome, pose for a photo in Rome on the center’s grounds. (CNS photo/courtesy The Lay Centre)

CHICAGO (CNS) — The largest seminary on the East Coast will establish a new office dedicated to the formation of the laity as the result of a partnership with a lay institute in Rome.

On Oct. 1, Immaculate Conception Seminary School of Theology at Seton Hall University in South Orange, New Jersey, announced its partnership with The Lay Center in Rome.

“At this particular moment, it is important to have a sense of the universal church and to step up to the plate, not only in serving but in leading in the church today. This partnership encourages such faithful leadership,” said Dianne Traflet, associate dean of the seminary theology school, located in the Archdiocese of Newark.

Traflet said the collaboration will allow the school to establish a stable presence in Rome that will help its students — whether in formation for lay or ordained ministry — to experience and understand more deeply the Catholic Church and to see people, including laity, serving in various leadership positions in the church.

The seminary is developing programming with The Lay Center slated to begin next July. The center will serve as a base for seminary professors encouraged to conduct research in Rome during the academic year.

In New Jersey, the Immaculate Conception Seminary School of Theology also will establish an office for The Lay Center on campus, said Traflet, which represents the Rome institute’s expansion into the United States.

The Lay Center was founded in 1986, by two laywomen, Riekie van Velzen of the Netherlands and Donna Orsuto of Ashtabula, Ohio, as a resident community for lay students enrolled in pontifical universities in Rome.

Orsuto is the center’s director and a professor at the Pontifical Gregorian University. While the center receives most of its support from the United States, it has operated exclusively in Rome up until now.

Traflet said the center’s mission — inspired by the Second Vatican Council to form laity in their baptismal call to service and to promote ecumenical and interreligious dialogue — is complementary to the Immaculate Conception Seminary School of Theology’s program of formation.

Traflet said the partnership “was not a response to the scandal” of sex abuse in the church or to the subsequent calls for a greater presence of well-formed lay leadership.

“We were thinking about this long before the scandals broke,” she said, and it seems to be “exactly what the church needs right now.”

She said the two institutions have had a long-standing relationship, with The Lay Center in providing formation programs for seminary and Seton Hall students and faculty for more than a decade.

However, a new formal partnership began Aug. 15, when an agreement between the two institutions was ratified at a board meeting of the center in Washington. According to the agreement, The Lay Center will become an institute under the umbrella of the seminary school of theology over a two-year period, while retaining its legal nonprofit status.

Msgr. Joseph Reilly, Immaculate Conception’s rector and dean, attended the board meeting and was welcomed to the board. Traflet also joined the board and assumed the role of senior liaison between the two institutions.

“Both The Lay Center and the ICSST have long and trusted traditions of providing formation for women and men as they prepare for service in the church and the larger community,” Msgr. Reilly said in a statement, dated Oct. 1.

“With this history, the strategic and program benefits of the new partnership are potentially extraordinary,” he said.

Cardinal Joseph W. Tobin of Newark and Mary Meehan, president of Seton Hall University, are both “very supportive” of the partnership, said Traflet.

Traflet said the decision on the part of the seminary to enter into the agreement was “unbelievably easy to discern” and “speaks to our trust and high esteem of The Lay Center.”

Traflet has known The Lay Center for more than a decade, having lived there while working on her doctorate at the Pontifical University of St. Thomas Aquinas.

She said she believes the new partnership could potentially attract more students to the seminary school of theology. Current enrollment includes more than 130 seminarians from 24 countries and 100 lay students, including 44 men in formation for the permanent diaconate.