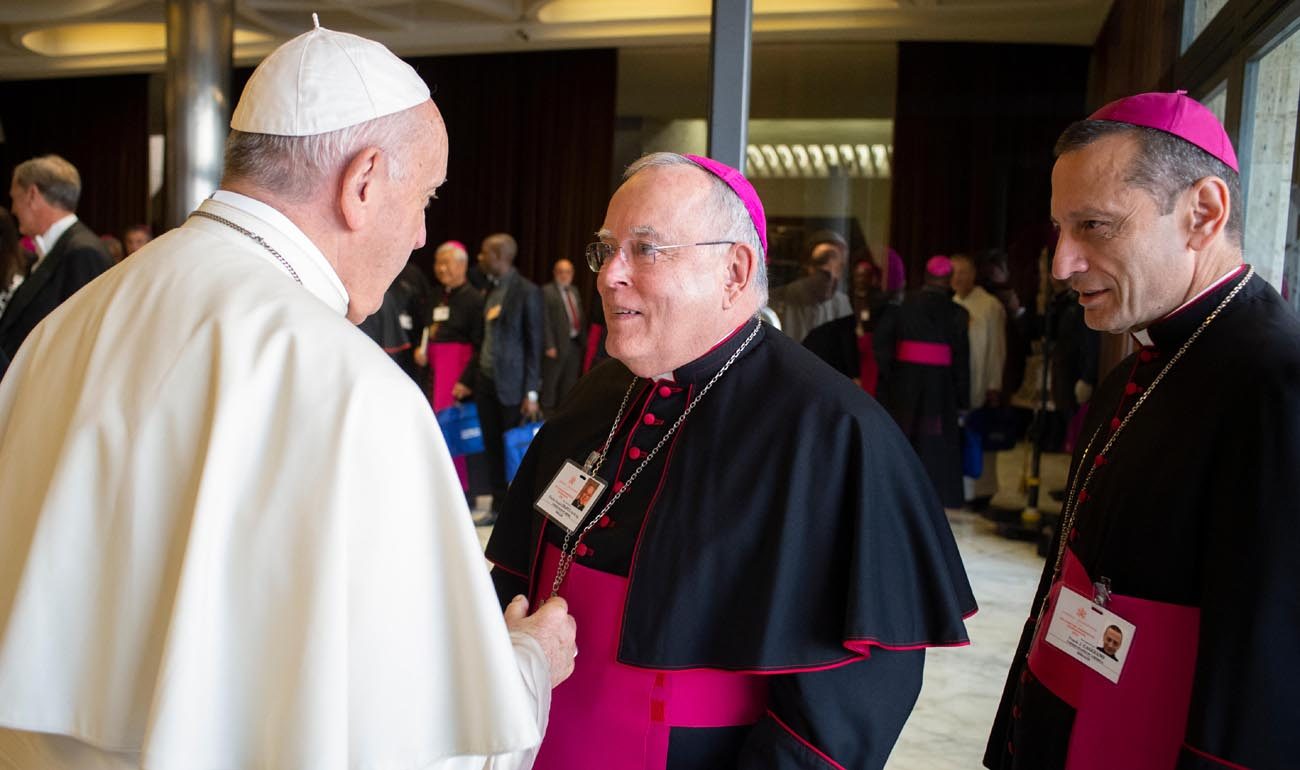 Pope Francis greets Archbishop Charles J. Chaput of Philadelphia before a session of the Synod of Bishops on young people, the faith and vocational discernment at the Vatican Oct. 16. Also pictured is Bishop Frank J. Caggiano of Bridgeport, Conn. (CNS photo/Vatican Media)

VATICAN CITY (CNS) — Improved religious education and a stronger sense of belonging to a community were some of the topics touched upon as the Synod of Bishops moved into its final round of speeches.

Accepting Pope Francis’ invitation for bishops to be bold at the synod, Auxiliary Bishop Thomas Dowd of Montreal told the assembly Oct. 16, “If I was pope — I know I’m not, but if I was — I’d write an encyclical on four basic questions” all human beings ask in one way or another.

The 48-year-old Canadian bishop told synod members that his own religious education in Catholic schools and parishes was “an abysmal failure,” an education that “just gave us pieces and no overall picture.”

The church needs to renew its religious education programs, he said, and should start by trying to respond to the four questions, which “haunt the heart of every person, religious or not.”

Swiss Cardinal Kurt Koch, president of the Pontifical Council for Promoting Christian Unity, also acknowledged the “critical situation of the transmission of the faith today” and insisted the best way to combat it is by being better examples for young people and encouraging them to be examples for their peers.

“We ourselves, Christians who live the faith, are the decisive instrument for spreading the word of God in a credible way,” he said. “We don’t need teachers as much as we need witnesses.”

Cardinal Beniamino Stella, prefect of the Congregation for Clergy, spoke of the essential importance of seminary education, but he also warned bishops of the phenomenon of “wandering seminarians, who migrate from one seminary to another and sometimes one diocese to another without anyone verifying beforehand the suitability of the person and his vocational journey.”

He reminded bishops that church rules require them to obtain the candidate’s files from previous seminaries and that information should include the results of psychological testing.

Bishop Henry D’Souza of Bellary, India, said the Catholic Church, its parishes and schools, have a clear mandate to educate and prepare leaders by “planting dreams,” giving young people ethical values and “enhancing critical thinking with an ability for problem solving.”

Young Catholics should be prepared “from childhood to heed God’s call to follow Jesus as priests, religious, scientists, artists, professionals, farmers and political leaders at all levels.”

That, however, requires personal attention to each young person, Bishop D’Souza said. “Saintly leaders are handmade, one at a time.”

Bishop Donal McKeown of Derry, Northern Ireland, told the synod that the education and formation of young Christians must take place in the context of a community and have the goal of solidifying their sense of belonging to the community.

For Catholics, he said, “a community is not just the context for handing on the faith, but also (is) part of the core content of the faith” because each person has value as part of the body of Christ.

Young people especially need to know they belong and that the church is a place where they can grow, make mistakes like Jesus’ disciples did, and start again, he said.

“Belonging provides the context for encountering Jesus alone and with others,” particularly through the Mass and other community prayer, Bishop McKeown said. “Prayer is not about twisting God’s arm to do things our way, but about letting God mold our hearts.”

“The call to belong, to grow in knowledge of Jesus and to serve may be countercultural,” the bishop said, “but they touch the hearts of young people where they are.”

NEXT: Inspire young people to be ‘everyday saints,’ archbishop says