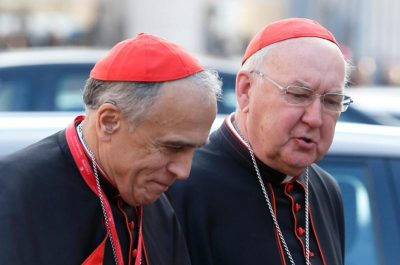 Cardinal Daniel N. DiNardo of Galveston-Houston, president of the U.S. Conference of Catholic Bishops, and Cardinal Kevin Farrell, head of the Vatican's Dicastery for Laity, the Family and Life, arrive for a session of the Synod of Bishops on young people, the faith and vocational discernment at the Vatican Oct. 16. (CNS photo/Paul Haring)

Cardinal Daniel N. DiNardo of Galveston-Houston, president of the U.S. Conference of Catholic Bishops, and Cardinal Kevin Farrell, head of the Vatican’s Dicastery for Laity, the Family and Life, arrive for a session of the Synod of Bishops on young people, the faith and vocational discernment at the Vatican Oct. 16. (CNS photo/Paul Haring)

VATICAN CITY (CNS) — Cardinal Daniel N. DiNardo of Galveston-Houston used his episcopal motto — “Hail O cross, our only hope” — as the title of his speech to the Synod of Bishops on young people, the faith and vocational discernment.

“The central event for our faith and life is recognizing, interpreting and choosing the invitation to embrace the cross,” he told his fellow bishops Oct. 16.

As the Catholic Church and its members strengthen their commitment to reaching out to young people, helping them “by dialogue to discern their way in the world and the church for a deeper, more human life,” they cannot ignore the cross, the cardinal said.

“Jesus asks everyone he meets to ‘Follow me,'” he said. “His invitation is strong, not weak; decisive, not anemic.”

As members of the synod discussed the assembly’s working document, making suggestions for how sections should be amended or altered for the gathering’s final document, Cardinal DiNardo said the cross and the meaning of Christ crucified were the key missing pieces.

Promoting youth ministry focused on encouraging a “growth process, a gradual maturing in faith,” has advantages, he said, but it can lead to a situation where “major spiritual themes might be diminished.”

Cardinal DiNardo noted how throughout the Gospels Jesus gradually reveals himself “as he beckons the Twelve, the crowds and us to the cross, to a crucified Messiah.”

“Jesus evangelizes through his identity as the crucified Lord,” the cardinal said. “It is impossible not to see this throughout the Gospels.”

Cardinal DiNardo told synod members they should not hesitate to present the truth of faith to young people because they “are not fearful. They are

NEXT: Young people, even those far away, are ‘ours,’ Salesian says