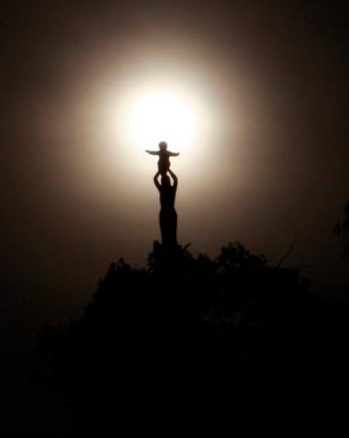 The statue of Our Lady of Sheshan, or Our Lady, Help of Christians, is pictured atop the minor basilica in her name in Shanghai. She is venerated throughout China. (CNS photo/Aly Song, Reuters)

HONG KONG (CNS) — The Vatican is still planning to interfere in affairs of the Catholic Church in China, a provincial religious affairs official told local Catholic representatives at a government seminar.

The Vatican and China signed a provisional agreement on the appointment of bishops in September. But PowerPoint slides prepared by Xiong Huaqi, deputy director of the Hubei Provincial Ethnic and Religious Affairs Committee, included one that stated, “Vatican’s attempt to interfere with our Catholic affairs has not changed,” reported ucanews.com.

The PowerPoint presentation accused some Catholics of having “lost their minds” because they did not know whether to be loyal to China or the Vatican. It said they were “confused” over the principle of the church in China having to be self-administered and independent of foreign pressures.

It asserted that advocacy by the Vatican and negative speeches would not stop, only become “more subtle and more diversified in the future.”

More than 80 priests, nuns and lay representatives from the province participated; some spoke to ucanews.com.

People familiar with the Catholic Church in China often have said that how Catholics are treated in the world’s fifth-largest country often depends on local and provincial communist officials.

The seminar was held in Wuhan city of Hubei province Oct. 8 to 11, less than a month after the Vatican-China deal was reached.

Xiong spoke on the requirements of China’s newly revised Regulations on Religious Affairs. He asked Catholics in the province to properly regulate their religious activities and safeguard the government’s interests.

He said this should be done in the spirit of the most recent National Congress of the Communist Party of China, which stressed Sinicization of the church. Sinicization emphasizes that foreign influences must be minimized in favor of adopting Chinese cultural characteristics.

PREVIOUS: Delegates from U.S. offer their perspectives at synod