Christians must live the beatitudes, not just preach them, pope says 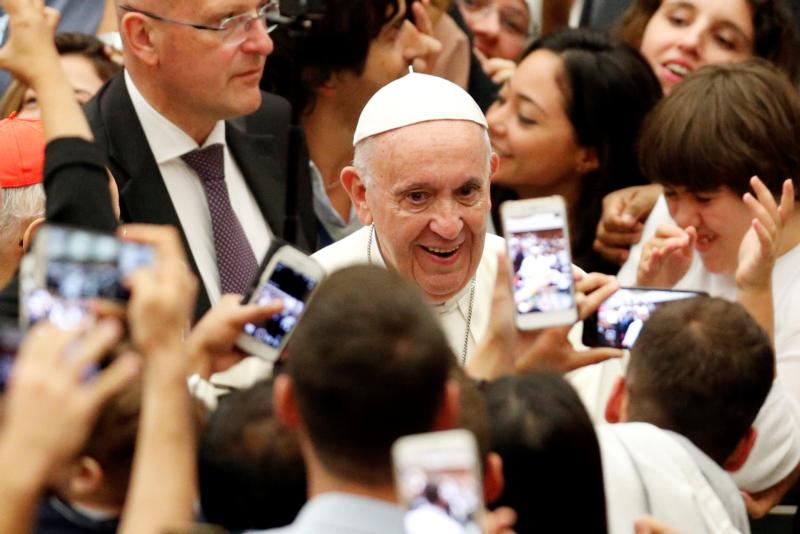 Pope Francis arrives for a gathering with young people and members of the Synod of Bishops at the Vatican Oct. 6. (CNS photo/Alessandro Bianchi, Reuters)

VATICAN CITY (CNS) — With songs, poetry and dance — including hip-hop — young people shared with Pope Francis and members of the Synod of Bishops some of their life stories, hopes, dreams and, especially, questions.

Young adults from several countries told their personal stories of finding faith; one young man recounted his teen years of crime, detention and finally jail; another spoke of his recovery from addiction; a young Italian woman spoke of volunteer work, living and working in a Syrian refugee camp in Lebanon; and another young woman talked about her current discernment as a novice in a religious order.

Then the questions came: What can we do to prevent teen suicide? How do we find meaning in life? How can we fight discrimination and inequality? How can we counter fear of foreigners? What can the church do to help young Christians in countries where they are a minority? How are young people supposed to respond to their peers who ask about the sex abuse scandal and are convinced the church is “a lair of people more interested in money and power than good?”

When it was his turn to speak more than 90 minutes into the evening’s program, Pope Francis said he could not short-circuit the synod by responding.

But he said the young people’s use of the word “consistency” or “coherence” was striking.

“It’s a strong word: consistency. The consistency of life,” he said. “When you see an inconsistent church, a church that reads the beatitudes to you, but then falls into the most princely and scandalous forms of clericalism — I understand you. I understand.”

A Christian, he said, must put into practice the beatitudes from Matthew 5:1-12 by being poor in spirit, pure of heart, meek and merciful, working for justice and peace.

And, especially if one is a priest or religious, he said, “follow the path of the beatitudes, not the path of worldliness, the path of clericalism, which is one of the ugliest perversions in the church.”

PREVIOUS: Mary is a mother to sinners, not the corrupt, pope says

NEXT: Top cardinal lashes out at Archbishop Vigano’s ‘open rebellion’ on McCarrick case