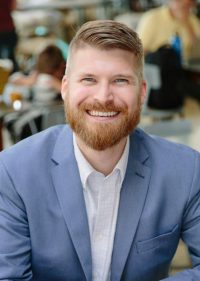 Jonathan Lewis, assistant secretary for pastoral ministry and social concerns in the Archdiocese of Washington is pictured in a 2017 photo. (CNS photo/Jaclyn Lippelmann, Catholic Standard)

VATICAN CITY (CNS) — Church leaders and members need to be “spiritual mentors” — like Jesus and the saints — befriending, accompanying and enriching the lives of young people, one U.S. observer told the Synod of Bishops.

“Young people are leaving the church for different reasons, but the absence of spiritual friendships and mentors in our families, schools and parishes lies at the heart of this crisis of faith,” said Jonathan Lewis, assistant secretary for pastoral ministry and social concerns in the Archdiocese of Washington.

“Spiritual friends and mentors are urgently needed today since young people trust personal relationships more than institutions,” he said in his Oct. 10 intervention, which he shared with reporters.

He began his brief talk in the synod hall by asking those present to think of how many young people they actually know by name.

He recalled the great impact a priest had on his life in college when he was invited to begin spiritual direction, which involved walking in the evenings in conversation, “like a modern-day road to Emmaus.”

While many of his peers had spiritual mentors when they were young, “most young Catholics today do not.”

Others leave, he said, “because they have serious questions that have never been answered. Young people are asking for mentors who listen to their questions and provide serious answers that offer a coherent Christian worldview.”

Others say they find the church to be irrelevant, Lewis said. “The church does not speak about their interests and experience. Young people are asking for mentors to befriend them and inculturate the faith into their lives.”

Lewis, who as an observer was taking part in the synod discussions but did not have a vote on the final proposals given to the pope, said “young people are not asking for a new event or ‘program’ but a relationship” with a person who gives life a new horizon and sure direction — the person of Christ.

This is why the first task of the church is to offer young people an encounter with Jesus through its witness, he said.

“Spiritual mentorship was the method of Jesus, the method of the saints, and should be our method today,” he said. This “art of accompaniment” is a “long-term apprenticeship in Christian living that no textbook or technology can replace.”

Local churches can start with clergy and laity asking themselves: how many hours they spend each week mentoring young people; whether their sacramental preparation programs provide long-term spiritual mentorship; whether they invest financially in the formation of lay mentors; and how many young people they know by name.

NEXT: Catholic, grass-roots groups work with survivors after Haitian quake