Fight against the devil is spiritual ‘urban’ warfare, cardinal says 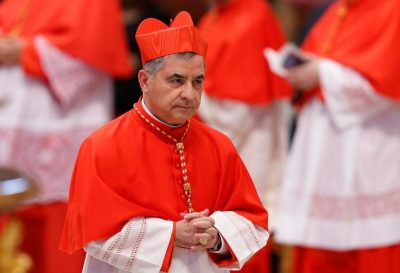 Cardinal Angelo Becciu, prefect of the Congregation for Saints’ Causes, is pictured after being made a cardinal by Pope Francis during a consistory in St. Peter’s Basilica at the Vatican June 28. (CNS photo/Paul Haring)

VATICAN CITY (CNS) — The most crucial battle against the devil is the one that Christians fight within themselves daily to resist selfish temptations that lead to destructive ends, a top Vatican official said.

Celebrating Mass for the feast of the St. Michael the Archangel Sept. 29, Cardinal Angelo Becciu, prefect of the Congregation for Saints’ Causes, said that the conscience of Christian men and women can often become “a battleground where the evil one besieges us with the incendiary fire of greed, envy, hatred, selfishness, suspicions, contempt or rejection of others, and every form of destructive thoughts.”

“This spiritual ‘urban’ — that is, interior — warfare often moves to the ‘suburban’ field of family relationships, as well as social and work relationships,” the cardinal said. “An uneven struggle is unleashed within us between the good we wish to do and the evil that instead takes over because it masquerades as an angel of light who deceives human freedom.”

Cardinal Becciu celebrated the Mass in the chapel of the Governorate of Vatican City State to commemorate St. Michael, who is the patron saint of the Vatican and Italian state police officers. Among the dignitaries present at the celebration was Matteo Salvini, Italian deputy prime minister and minister of the interior.

“The intercession of the Archangel Michael leads us to recognize and to always do good for ourselves and for others, at the cost of any sacrifice, because good will always be repaid by God with good,” Cardinal Becciu said.

He also reminded police officers that in their mission of maintaining civil order, they must keep in mind the difference between evil and those who commit evil deeds. Human dignity, the cardinal said, must always be respected while sin and crime must never be tolerated.

“Many times,” the cardinal said, “it isn’t easy to distinguish between sin and the sinner, between crime or an offense and the person who commits it, but it is necessary to fight evil and injustice, placing those who err in the condition of not making mistakes anymore.”

“You must always act like angels with the spirit of one who is sent to build good,” he told the officers.

By following the example of St. Michael, Christians can also become “good angels in our daily work,” fighting against “evil in society in order to root it out completely.”

Also on St. Michael the Archangel’s feast day, Pope Francis met with 7,000 members of the Italian National Association of State Police and their families; he thanked them for their service, which involves “an often hidden commitment” of solidarity and sharing.

The spread of Jesus’ timeless message of solidarity and peace, the pope said, is a mission shared by all people in the practice of charity, “which changes the world and history even if we do not immediately realize its effects.”

“This is our goal and this is what you contribute as the National Association of State Police every time that — following the example of your patron saint, St. Michael the Archangel — you oppose everything that wounds or destroys the human person,” Pope Francis said.

NEXT: God works freely through whomever he wants, pope says