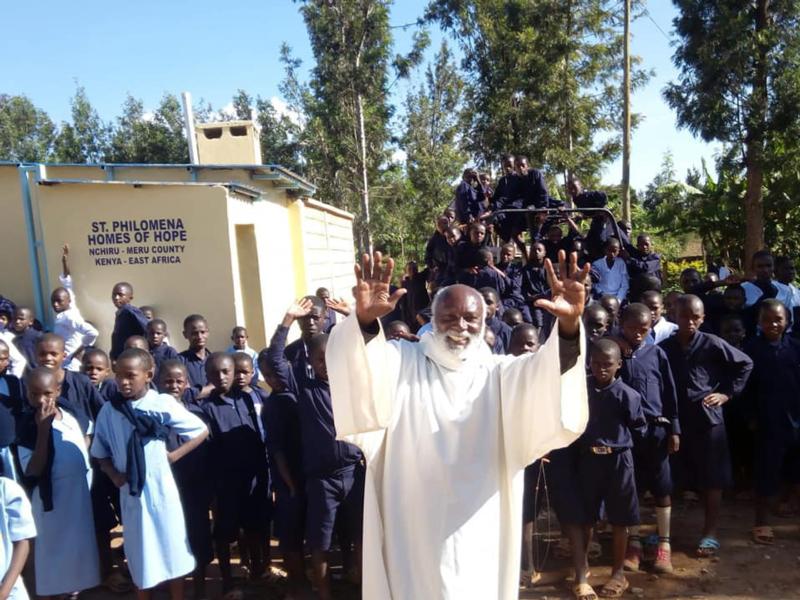 MERU, Kenya (CNS) — As dawn breaks in this eastern Kenyan town, Father Francis Riwa and his team head to the streets to find and rescue vulnerable children.

On an average day, they take three children to St. Rita Catholic Church, where his congregation has donated food, blankets, clothing and other items.

At the same time, another team goes to the rural villages to support and encourage young, poor nomadic girls, encouraging them go to schools rather than marry. Those girls often enroll in one of the several schools Father Riwa has founded in the region.

Father Riwa, 62, has helped street children, orphans and poor nomadic children in the desert region of Kenya. He has founded several Catholic churches and schools in predominantly Muslim northern Kenya, where it has been always rare to find a place of Christian worship.

The bearded priest was born in northern Tanzania and later came to Kenya, where he attended high school and went to St. Thomas Aquinas Seminary in Nairobi. Two decades ago, he began his mission with seven street children. Today, more than 2,000 orphaned children live in Meru’s Children’s Village, which he founded. Thousands more have left and now attend universities or work throughout the East African country.

“I feel very happy when I see these children succeed in education and get jobs,” he said. “Many don’t know their parents and families. They now belong to the church. They usually come during school holidays to help the church and other children who are in the same situation they were years back.”

Many of those whom Father Riwa saved from the streets and early marriages have celebrated his work across East Africa.

Lilian Nabaru, 15, a Samburu girl from Lomirok village, said she would not have gone to school had it not been for Father Riwa. She said the priest rescued her from an early marriage that her parents had organized secretly with a 60-year-old man. Lilian said the priest returned 10 cows as the dowry that her former husband had paid her parents to ask her hand in marriage.

She said she would like to be a nun after she completes her education.

“It’s something that I can’t still believe that I’m here today,” said Lilian, who is now in 10th grade. “I know my dreams will now come true. I want to become a nun and teacher so that I can also change lives of vulnerable children. I want to go to my community and fight for the rights of girls to education.”

Frankline Mungira, a student at Mount Kenya University in Meru, said Father Riwa and other priests in the diocese are like his parents. Mungira was rescued from the streets of Meru 20 years ago when he was 6. He does not know his parents or any of his family members. He attended one of the schools founded by Father Riwa, and he said he wants to be a teacher, so he can go back and work with the priest.

“It’s like a miracle,” said Mungira. “I will be dead by now had it not been for Father Riwa. … I thank God for everything. I have a desire to help street children when I finish my education. It’s one the mission God wants us to do.”

The Catholic Church in Kenya, which is estimated to have 7.5 million members, or a third of the population, has been urging priests and their members to devote themselves to helping the poor and suffering as Jesus did during his ministry.

“Father Riwa is doing a great job of assisting the poor,” said Bishop Philip Anyolo of Homa Bay, chairman of the Kenya Conference of Catholic Bishops. “He is helping the poor and being on the side of poor people. He is doing what the Catholic Church teaches and even what Jesus Christ taught about.”

He urged priests to help Father Riwa in his mission to save vulnerable children in streets, homes and early marriages.

“It’s something we should do because the work of charity and social teachings exists in church. I want to encourage priests and our members to help the poor and save lives where they can, because that’s what the Bible teaches us,” the bishop said.

Father Riwa is now focusing on children with HIV and those suffering from AIDS. Many have been abandoned by parents who have the disease. Partnering with Friends of Kenyan Orphans, an organization that provides a community of support for abused, orphaned and abandoned girls in Kenya, he has rescued hundreds of children since last year.

“I want to continue saving lives of vulnerable children because that makes me happy,” he said. “I’m not going to give up on this mission, and I urge others to join me to make a difference in people’s lives.”

NEXT: Australian nun ordered to leave Philippines by Nov. 3