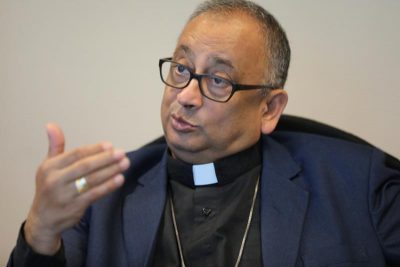 WASHINGTON (CNS) — In one remote corner of India, a nation where Hindu nationalists control the government and have been accused of stoking intolerance and violence against religious minorities, the Catholic Church is faring quite well.

In the Diocese of Miao, in Arunachal Pradesh state in extreme eastern India near the Chinese border, the Catholic faith is growing, said Bishop George Pallipparambil.

Catholics make up about 20 percent of the relatively new diocese’s population, said Bishop Pallipparambil, who was in Washington Oct. 17 on the second week of a U.S. trip to raise funds to support the diocese and to thank donors.

Bolstering education and the economy, decreasing violence and giving greater dignity to girls and women have proven key, Bishop Pallipparambil said, and the trends show continued growth within the diocese.

The India-born bishop, 65, who was ordained a priest of the Salesians of Don Bosco, had one of his first assignments in Miao. It was a five-day journey just to get to Miao, whose current population is about 25,000.

“There were tribes. There were headhunters. There was much violence throughout,” he said.

“India and China fought a border war over the land, and the (Indian) military runs it as a state within a state,” he said.

But the Salesians, who specialize in education, began to open schools in the region. There are now 44 grade schools, 13 high schools, one advanced high school and one college sponsored by the church, which educates an estimated 18,000 children throughout the diocese. Most are run as boarding schools, with separate facilities for boys and girls.

As part of the curriculum, they learn English.

“English is the language of the future,” said Ireland-born Deacon J. Rory Desmond of the Archdiocese of San Francisco, who visits Miao every year or two and assists Bishop Pallipparambil with fundraising.

“The children love English,” the bishop added, noting many of them qualify for entry into colleges and universities in India and, upon graduating, often find jobs and careers outside Miao. The diocese also sponsors vocational training centers for boys and girls who have dropped out of school.

With education has come better ways of resolving disputes, he said.

“When there was a land dispute, one tribe would fight with another tribe,” Bishop Pallipparambil said. “Now they can go about things more peaceably.”

Even the military, which has been more or less permanently stationed in Miao to quell disorder, became “relaxed” and friendly once the results of the church’s work became visible, Bishop Pallipparambil said.

The diocese also started the region’s first hospital and established health clinics in some of the most remote areas.

“The infant mortality rate used to be terrible,” the bishop noted. “But where there are clean conditions to give birth, the children live.” Infant mortality, he estimated, is down 80 percent.

This has carried over into a tribal custom that is quickly vanishing: arranged marriages.

“It used to be that as soon as a girl became of age, her family would sell her to another family for marriage,” Bishop Pallipparambil said. “But now that we teach the dignity of girls and women, the girls choose their husband.”

Bishop Pallipparambil has been stationed in the Miao region since the 1980s. When Miao became a diocese in 2006, he became its founding bishop. But he does not do it all by himself. He is assisted by nearly 100 priests, and 165 women religious, many of them from the Missionaries of Charity. The bishop knew the order’s founder, St. Teresa of Kolkata, who sent some of her nuns to work in Miao. Add to that another 150-plus catechists, 30 parishes and a seminary with 31 students and the church there is poised for continued growth.