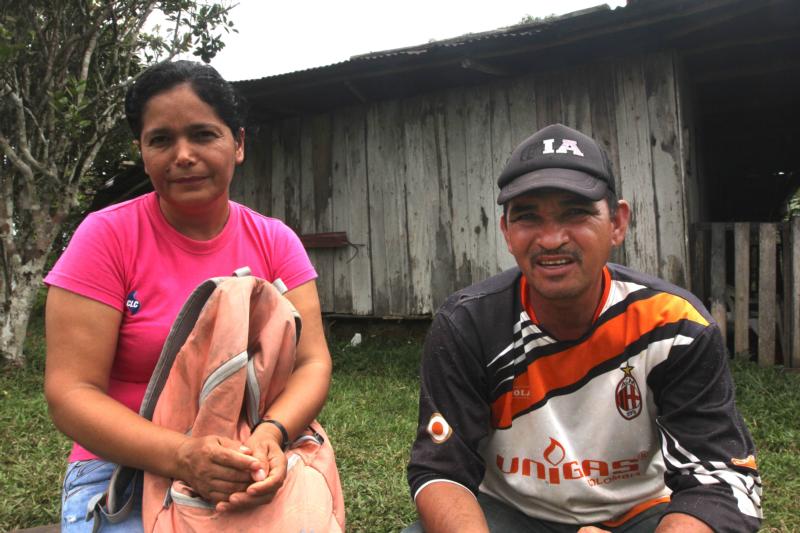 But as they began to rebuild their lives, eking out a living with a small herd of dairy cows, they found themselves trapped anew in violence involving armed guerrillas, paramilitary groups and government security forces.

And although peace accords signed in November 2016 officially ended the armed conflict between the Colombian government and the Revolutionary Armed Forces of Colombia, they still have not ended the violence for this farming couple and their neighbors.

Companies that once avoided Colombia’s Amazonian region because of the hazards of war are now jockeying to profit from timber, oil, minerals and palm oil plantations. That places small farmers and the Catholic Church workers who help them on a dangerous frontier marked by conflicts over land, oil, mining and drug crops.

The situation is especially complicated in his diocese, where violence between paramilitary and guerrilla groups forced many people to flee their land. Some who are returning now find that others have taken over their farms. Because many small farmers lack property titles, the resulting conflicts over ownership could take years to untangle.

Others are caught up in conflicts between drug traffickers who pressure farmers to grow illegal crops such as coca, from which cocaine is made, and threaten those who join government programs that promote a switch to other crops.

When Emerald Energy, a Chinese oil company, began exploring for oil in the area, small farmers complained that the explosions from seismic tests caused small landslides on their property and disrupted water supplies. After a violent confrontation between company personnel and local residents, a majority of participants at a public hearing in 2015 rejected the company’s overtures.

The hardships faced by small farmers in Amazonia, and their growing awareness of environmental issues, pose new challenges for the church.

Pope Francis called attention to the region in January, when he met with Amazonian indigenous people in Peru and called for the church to have “an Amazonian face.”

He also launched a nine-country Pan-Amazonian Church Network — REPAM in Spanish — and he will convene a Synod of Bishops for the Amazon in October 2019.

In speeches and church documents, the focus has been on indigenous people as defenders of Amazonian forests and rivers, Elena Gomez, REPAM’s Colombia coordinator, told CNS. But discussion at a presynod gathering in Florencia in early September “made it clear that the church also has the face of a small farmer.”

Small farmers who have settled in rural Amazonia “are stigmatized as being the ones who chop down the trees and burn them,” Gomez said.

But they also depend on the land, and the church must join forces with both indigenous people and small farmers in efforts to care for “our common home,” as Pope Francis called the earth in his encyclical “Laudato Si’.”

During the presynod gathering, one small farmer said, “If I had understood before that there is a living behind behind this tree, and there is more life behind it, I would have used the land differently,” Gomez told CNS.

“The problem we have in Amazonia is that there is no clear vision that life is interconnected,” she said.

Development that depends on the extraction of resources like timber, minerals, and oil and gas “does not recognize the interconnection of life — water sources, mountains, air, humans, microorganisms,” she said.

Colombia is one of many Latin American countries whose economies still depend on the production and export of raw materials such as minerals, timber and oil. Drug trafficking, concentration of land in the hands of a few large landowners, and displacement of small farmers for large development projects are consequences of economic development that depends on the export of raw materials, which is typical of Latin American economies, Gomez said.

In Caqueta, that problem could become more acute. The Colombian government is seeking to reclassify the region as Andean, rather than Amazonian. That would remove it from the area covered by laws that protect Amazonian ecosystems, opening it to mining and industrial agriculture.

In the southern part of the Diocese of Florencia, the social ministry office helps small farmers switch to more environmentally friendly techniques, provides training about land rights and supports farmers who are threatened for defending those rights.

Cirley Correa, 25, who has participated in social ministry courses, worries about how oil drilling or oil palm plantations could affect the water sources on which her family’s small dairy farm depends.

Some of her neighbors are in favor of those projects because the companies offer cash payments to land owners.

PREVIOUS: Church needs to meet young people where they are, U.S. observer says