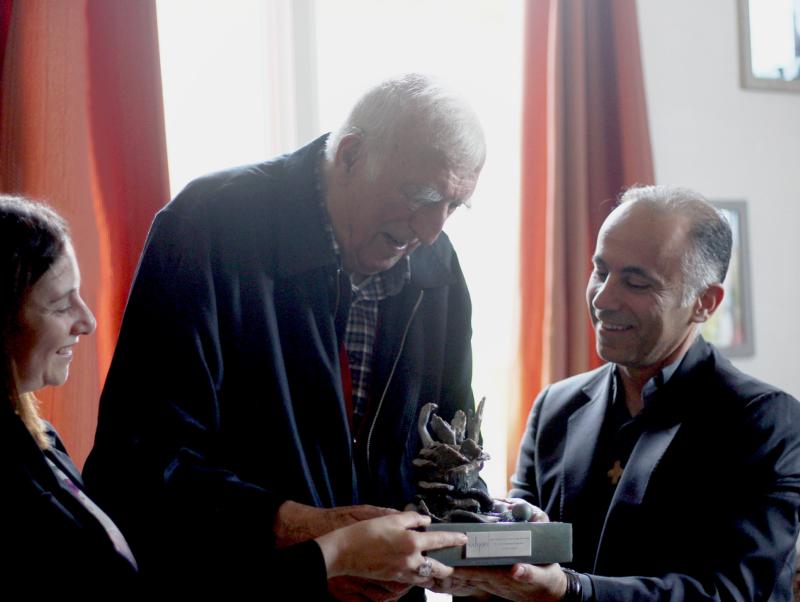 Father Fadi Daou, right, president of Adyan, and Nayla Tabbara, also of Adyan, present the Spiritual Solidarity Award to Jean Vanier, founder of the International Federation of L’Arche Communities, Oct. 6 in Trosly, France. Adyan is a foundation for interreligious studies and spiritual solidarity based in Lebanon. (CNS photo/courtesy Adyan Foundation)

BEIRUT (CNS) — Jean Vanier, founder of L’Arche, is the recipient of the Spiritual Solidarity Award from Adyan, a foundation for interreligious studies and spiritual solidarity based in Lebanon.

The now 90-year-old Canadian Catholic philosopher, theologian and humanitarian founded L’Arche in 1964. In an atmosphere of compassion, people with developmental disabilities and those who assist them share their lives together in L’Arche communities, which have spread to more than 37 countries. L’Arche (“the ark” in French) stresses the dignity and value of human life.

Father Fadi Daou, Adyan president, and Nayla Tabbara, the foundation’s director of citizenship and diversity management, presented the award to Vanier Oct. 6 in the French town of Trosly.

In the official letter to Vanier accompanying the prize, Father Daou said Vanier’s “testimony, as well as that of L’Arche communities throughout the world and throughout diverse religions and cultures, shows that the values of diversity, solidarity and human dignity are truly a path of communion and peace. L’Arche has shown the world how human weakness and disability can carry a new meaning for what it is to be human.”

As recipient of the award, Vanier also becomes an honorary member of Adyan, which was founded in 2006.

Vanier said in his remarks that the relationship between L’Arche and Adyan means a lot to him, and the award left a great impact in his heart. He added that he and all L’Arche groups have a great desire to open up to the other, “so we help them and they help us to discover that each one of us is a very beautiful human being.”

The Spiritual Solidarity Award, now in its 11th year, aims to encourage and honor people devoted to developing and promoting solidarity and unity among citizens of different faiths, especially in the contexts of tension and violence.

NEXT: Superiors general see no reason why women shouldn’t have vote at synod