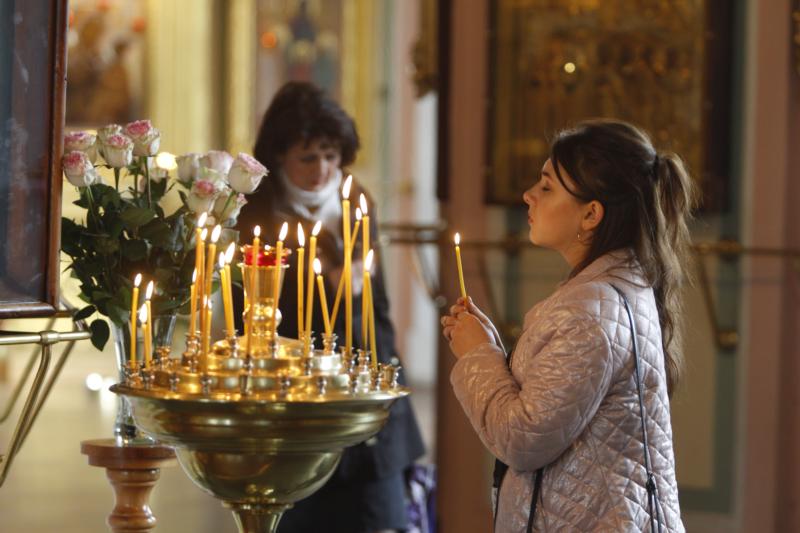 A Russian Orthodox woman lights a candle and prays in an Orthodox parish in St. Petersburg May 29, 2017. (CNS photo/Robert Duncan)

Ecumenical Patriarch Bartholomew of Constantinople, who holds honorary primacy among the world’s 14 main Orthodox churches, plans to grant autocephaly, or independence, to Christians in Ukraine, many of whom have been linked to the Russian Orthodox Church’s Moscow Patriarchate. Calls for a single independent Ukrainian Orthodox Church intensified after Russia’s 2014 forced annexation of Crimea and military intervention in eastern Ukraine. In 2016, Ukrainian President Petro Poroshenko petitioned Istanbul-based Patriarch Bartholomew to grant the necessary “tomos of autocephaly.”

Some observers have cautioned that Catholic-Orthodox relations could be set back by inter-Orthodox feuding.

“When you’re in dialogue, it’s necessary to have some unity, so you know whose position is representative,” said Viktor Khroul, a Moscow University professor and former Catholic newspaper editor.

“This has been a problem in links between the Catholic Church, which is united and organized, and the Orthodox world, which lacks a common position on many issues. If inter-Orthodox disputes now deepen, ecumenical ties may also suffer,” he told Catholic News Service Sept. 30.

Khroul said Catholics in Ukraine already were having trouble organizing social and charitable projects, as rival Orthodox leaders refused to work together.

“The best stance for Catholics now, both individually and ecclesially, is to maintain their distance from each side, while praying these Orthodox conflicts will be healed in a spirit of unity, love and justice,” he said.

“While the Catholic Church and Vatican have been careful to avoid any involvement in inter-Orthodox disputes, ordinary Catholics naturally want Ukraine to be sovereign and know it won’t be, as long as part of its Orthodox church remains dependent on Moscow,” said Przeciszewski, an expert on Russian and Ukrainian affairs.

“But contacts with the Vatican are important for Russia’s position in the world, and it isn’t in anyone’s interests to break them off, especially when Pope Francis is showing such goodwill,” he added.

Orthodox Christians nominally make up 70 percent of Ukraine’s 44 million inhabitants and have been divided since the 1991 collapse of Soviet rule. One church remains subject to Russia’s Moscow Patriarchate; the two breakaway churches, one with a patriarch in Kiev and one known as the Autocephalous Ukrainian Orthodox Church, have not been recognized by Orthodox leaders abroad.

Eastern and Roman Catholics account for a tenth of the population.

The head of inter-Christian relations for the Russian Catholic bishops’ conference, Bishop Cyryl Klimowicz of Irkutsk, told CNS Sept. 28 the inter-Orthodox dispute was a “political matter” of no concern to Russian Catholics.

The head of eastern relations with the Vatican’s Pontifical Council for Promoting Christian Unity, Dominican Father Hyacinthe Destivelle, declined a CNS request to comment on the controversy.

NEXT: British bishops report on meeting with pope