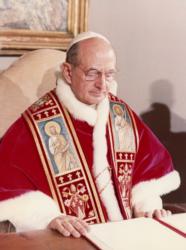 JERUSALEM (CNS) — For Holy Land Christians, St. Paul VI left behind a legacy of Catholic institutions to serve and strengthen the community.

On a more personal level, for two Catholic families living in the Old City of Jerusalem, he left behind a special blessing and a relic which has taken on more significance for them after his canonization by Pope Francis Oct. 14.

During his January 1964 visit to the Old City, which then was under Jordanian rule, St. Paul VI made a spontaneous stop to the home of a sick man to hear his confession. Upon leaving the man’s home, he was received with a traditional cup of coffee from Fairuz Orfali and greeted by Laila Soudah, neighbors who shared the same courtyard.

The Orfali family has kept the plain white cup safely stored in a felt-lined glass and wooden box while the Soudahs have photographs of the visit.

After the pope took a symbolic sip of the coffee, Orfali, in the old local tradition of welcoming honored guests, poured the remains of the coffee at the pope’s feet. The cup remains as it was: coffee grounds still at the bottom and around its side.

“It gives me chills now, especially that he has been canonized,” said Soudah’s daughter, Hania, 52, who had not yet been born during the visit. Her oldest sister Hanady was blessed by the future saint as were others in the courtyard.

“This was the first visit of a pope to the Holy Land. My grandparents, mother, father, our neighbors welcomed him in the traditional way. This is now something to be passed down generations of our family,” Hania said.

“Who am I that the pope should come to visit us?” her father, Issa, 84, said as he leafed through a folder with photographs of the visit. “We moved flower pots so there would be room. We were very honored he visited our house.”

During the visit, St. Paul VI called for the establishment of social rehabilitation and development projects. His call eventually led to the founding of Bethlehem University, Ephpheta Institute for hearing-impaired children, Tantur Ecumenical Institute, and Notre Dame of Jerusalem Pilgrimage Center.

As early as the 1940s, the future pope — Msgr. Giovanni Battista Montini — in his capacity as Pope Paul XII’s assistant responsible for displaced Palestinian refugees, had championed the Pontifical Mission Society’s relief efforts and continued to do so throughout his papacy.

At a November 1948 meeting in the Vatican, Msgr. Montini named the head of Catholic Near East Welfare Association at the time, Msgr. Thomas J. McMahon, to lead a papal mission specifically for displaced persons in Palestine which became the Pontifical Mission for Palestine. Pope Pius entrusted the mission to CNEWA.

As pope, he continued to show a deep commitment to CNEWA’s work by beginning his pontificate with the historic trip to the Holy Land, which he called a “pilgrimage of prayer and penance.”

“He wanted to establish such institutions that would help empower the situation of the local (Christian) community in the Holy Land,” said Joseph Hazboun, CNEWA regional director in Jerusalem.

The apostolic delegate in Jerusalem at the time, then-Father Pio Laghi, was a close friend of the pope and teamed with CNEWA and other organizations to make the pontiff’s ideas a reality.

“At that time, we were under Jordan rule with a majority of Muslims so for us these were very important,” said John Orfali, Laila Soudah’s son. “It made us feel that we belong here.”

The establishment of the Bethlehem University provided for the first time a school of higher learning for young Palestinians so they would not have to go abroad to study and boost emigration. The three other organizations continue their original mission, Hazboun said.

The initiatives St. Paul VI promoted testified to his belief in the church as an instrument of reconciliation and hope, CNEWA said Oct. 16 in a statement about the canonization.

“St. Pope Paul VI left a large legacy and an example for many to follow in his quiet and humble way,” Hazboun said. “Really what we need now is humble people who can set aside the difficulties and disagreements that have accumulated over 1,000 years creating divisions which are due to political issues rather than theological issues. The unfortunate division still continues making it difficult to achieve unity.”

A year following his pilgrimage, Pope Paul VI issued the groundbreaking declaration “Nostra Aetate” on relations of the church to non-Christian religions.

“He was the continuation of the revolution but a completely different personality,” Rabbi David Rosen, director of the American Jewish Committee’s Department of Interreligious Affairs, said of St. Paul VI. He noted that most Israelis — unfairly in his opinion — have a mixed response to St. Paul VI’s Holy Land visit because he refused to meet with Israeli leaders in Jerusalem and met them instead in the northern city of Megiddo.

“It was seen as a great thing by Israel, but as it did not lead to anywhere, no establishment of relations, there was a sense in Israel of a letdown,” Rabbi Rosen explained. “With the rapid pace of Pope John XXIII, there had been expectations which were not met. But I feel he really tried to move forward.”

He delivered a warm speech in Megiddo, said Rabbi Rosen, testing the waters but needing to be cautious because there was negative reaction from the Arab world. Still, in 1974, he established the Pontifical Commission for Relations with the Jews.

“We remain deeply grateful for the love and passion he brought to his papacy, and which he shared so selflessly with the suffering peoples in the Holy Land, a place now so fraught with division, hardship and violence,” CNEWA said it its statement. “So many of those we serve need his prayerful intercession now, more than ever.”