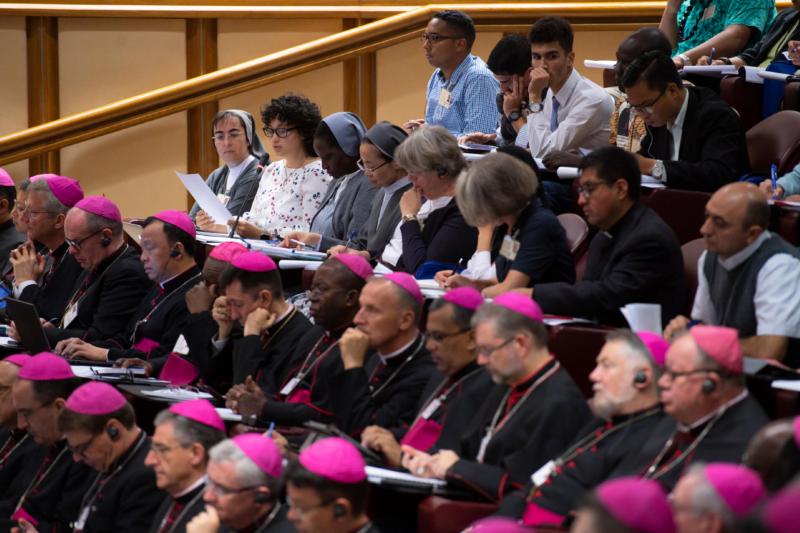 VATICAN CITY (CNS) — Two women religious urged the Synod of Bishops to open more space in the Catholic Church, including in decision-making roles, to women and young people.

Young Catholics can “challenge all the people of God in living our common purpose of revealing God’s love,” said U.S. Sister Sally M. Hodgdon, superior general of the Sisters of St. Joseph of Chambery. “Can we let go and walk the path with them?”

Sister Hodgdon and Korean Sister Mina Kwon of the Sisters of St. Paul of Chartres were among the nonvoting synod observers who were invited to address the gathering Oct. 5.

Synod members must try to trust the Holy Spirit, Sister Hodgdon said, and trust young people “to design what a welcoming and open church is and looks like today.”

In addition to the horror of the sexual abuse scandal, she said, church members betrayed young people “through nonacceptance, a lack of integrity and transparency and a lack of authentic Gospel living.”

Reversing that, Sister Hodgdon said, could be done by expanding parish leadership to include young people and giving them “the freedom to lead in a different way,” appointing youth advisers for dioceses and establishing “an international youth council” to share ideas with Vatican offices, bishops’ conferences and the international unions of superior generals of religious orders.

Sister Kwon addressed the call from young Catholics around the world for “spiritual mentors.”

“This role is not and cannot be limited to priests,” she said.

Coming from Korea, where the Catholic faith took root and spread for decades through the sharing of laypeople and not priests, Sister Kwon said “it is ironic” that the church in South Korea, like throughout the world, has adopted a “new medieval hierarchy” that places all responsibility in the hands of priests and bishops.

Living in a rigidly ordered society, Koreans were attracted to Catholicism 200 years ago in part because it professed that all human beings are children of God, she said. “Catholicism brought new opportunities for women to become leaders and teachers. In other words, women were given an almost equal place in the initial stage of the Korean church.”

“Young people are sensitive to the issue of inequality and exclusion,” Sister Kwon told the synod. And they need both male and female mentors.

“Living in a more authentic church is what young people are longing for,” she said.

However, journalists from Vatican News are present in the hall and are providing broad summaries of the discussion, and many bishops are releasing the texts of their speeches.

The French news agency AFP reported Oct. 4 that Auxiliary Bishop Emmanuel Gobillard of Lyon told the synod members they must “speak freely about sexuality” and find ways to provide sexual education to young people, including seminarians.

“Too often, young people discover sexuality through the prism of pornography or the embarrassed silence of older generations,” the bishop said, according to AFP.

The 50-year-old bishop said that when he entered the seminary in 1989, talk about the students’ sexuality was limited to seminary staff members telling the young men to take a cold shower or go jogging.

Synod members asked for “a reflection on sexuality, a gift of the Lord about which young people want a constructive word from the church,” Vatican News reported. “Sexuality must not be ignored, denied or idealized, the synod fathers said,” but the church must find effective ways to teach about sexuality.

Paolo Ruffini, prefect of the Dicastery for Communication, told reporters Oct. 5 that one of the synod members said the bishops needed to discuss ways to present church teaching about sexual abstinence outside of marriage and ways to respond to young people who ignore that teaching or find it too difficult and eventually move away from the church.

With the first week of the synod focused on describing the reality in which young people live today, many of the initial speeches urged special attention to young victims of what Pope Francis has called the “throw-away culture.”

Speeches in the afternoon session Oct. 4, Vatican News said, included pleas to reach out to former child soldiers, children of divorce, young people who are struggling or have parents struggling with addiction or with unemployment and with young migrants “like those, who, after graduating, leave their homeland in the search for a better life and end up losing their roots, moving away from the faith and not developing their talents.”

Liturgies that are beautiful and homilies that a powerful were cited repeatedly Oct. 4-5 as important elements in attracting young people to the church and encouraging their full participation.

Asked by a young journalist who prefers the “extraordinary form” or pre-Vatican II Latin Mass if the bishops realized how many young people are like him, Australian Archbishop Anthony Fisher of Sydney explained Oct. 5 that “young people are very diverse,” but whether they appreciate “loud, catchy” music or Gregorian chant, they are “lifted up and inspired by the beautiful,” and that requires careful liturgical preparation.

As for homilies, “even one minute is too long if it’s boring,” the archbishop said at the briefing.

Ruffini said some synod participants also spoke about the importance of silence and silent prayer, which many young people yearn for and too few programs for them encourage.

NEXT: Cardinal: Damage of abuse scandal caused by church leadership, not media