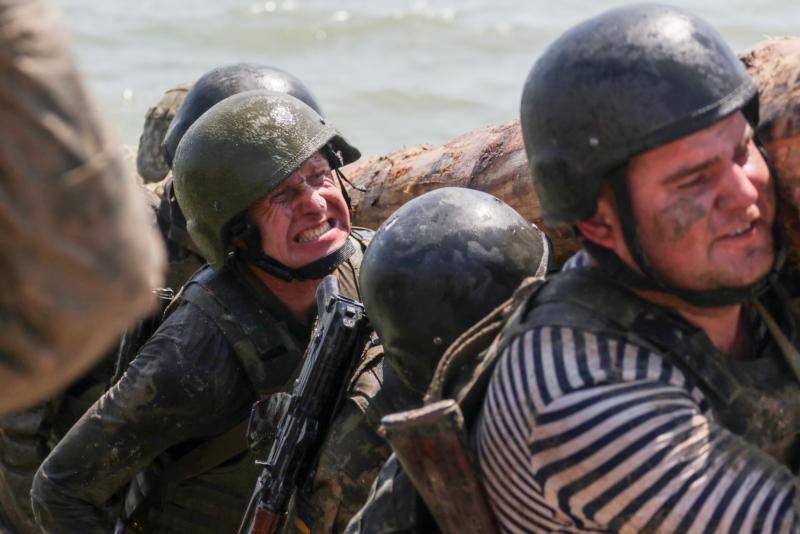 Young Ukrainian Marine recruits are seen on the obstacle course during their training in late May at a shooting range near Mariupol. The horror of the ongoing war in Eastern Ukraine is shaping the moral compass of a generation of young Ukrainians and preparing them to be heroic Christian leaders, said the head of the Ukrainian Catholic Church. (CNS photo/Sergey Vaganov, Reuters)

VATICAN CITY (CNS) — The horror of the ongoing war in Eastern Ukraine is shaping the moral compass of a generation of young Ukrainians and preparing them to be heroic Christian leaders, said the head of the Ukrainian Catholic Church.

“Frequently, a young person that has suffered, that has gazed into the eyes of death on the field of battle or who has braved bombs to save the life of civilians, learning to preserve life in extreme conditions, understands the value of human life better than an arrogant priest or kleptocratic politician,” Archbishop Sviatoslav Shevchuk told the Synod of Bishops Oct. 18.

Confronted by Russian “military aggression,” young Ukrainians especially “are dying for our country,” thus becoming the “principal protagonists of the transformation of our society,” the archbishop told the synod, which is discussing “young people, the faith and vocational discernment.”

The Ukrainian Catholic Church, headed by Archbishop Shevchuk, survived almost total destruction by the Soviet Union in the 20th century and has since risen to an increasingly prominent role in national life and politics.

Young Ukrainians — “not only Catholics” — believe the church “represents a moral and spiritual authority and is the teacher of life,” Archbishop Shevchuk said. They “look to us as a moral authority that offers clear direction for their lives.”

Some commentators on international politics have explained contemporary Catholic-Orthodox rivalries in Ukraine as religious expressions of competing nationalisms. Archbishop Shevchuk warned the synod fathers that the young people of his country would never belong to a church interested only in political victories.

Young people “harbor a certain aversion to a church which presents itself as a cold structure, which fights for its own survival and for geopolitical interests,” he said. “They tell me that such a church will never be young.”

On the contrary, “young people are searching for a formative community which is capable of becoming an oasis of true humanity and human dignity,” he said.

Because of the war, that search has led many Ukrainians to flee their homeland, the archbishop lamented.

“Ukrainian immigrants,” he said, “are in the millions; and they are a population of young people.”

Ukraine’s recent trials underline how necessary “human, spiritual and professional maturity” is for young people today, he said. Only with such maturity will they become witnesses to the “treasure in our faith in the only savior, Jesus Christ.”

NEXT: Synod groups on sexuality: Church welcomes all, calls all to conversion