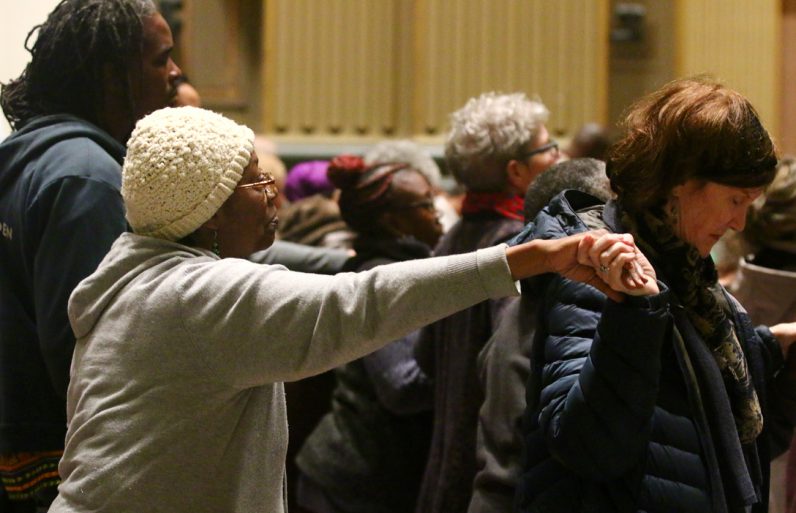 The 56th annual Mass in honor of St. Martin de Porres drew hundreds of Catholic faithful from across the Archdiocese of Philadelphia on Monday night, Nov. 5 to the Cathedral Basilica of SS. Peter and Paul.

Some came to hear the preaching of Bishop Shelton J. Fabre of the Diocese of Houma-Thibodaux, Louisiana. Others sought inspiration from the sacred songs offered by the Philadelphia Catholic Gospel Mass Choir.

Most, however, were there to honor and pray for the intercession of St. Martin de Porres, a 16th century Peruvian son of a freed slave who was canonized in 1962.

“I am here because this is my chance to be at an observance of someone of African descent who paved the way for us,” said Naomi Richardson, a member of St. Malachy Parish in North Philadelphia. “We are here to recognize his pioneering spirit. St. Martin de Porres fostered that.”

The Mass also marked the start of National Black Catholic History Month, observed throughout November in the United States.

“This is my first St. Martin de Porres Mass,” said Nisa Pho, who is learning more about the Catholic faith through the RCIA classes at St. Athanasius Parish in the West Oak Lane section of Northwest Philadelphia. “My co-worker told me about it. She said that I would enjoy the experience because of my interest in the faith.” 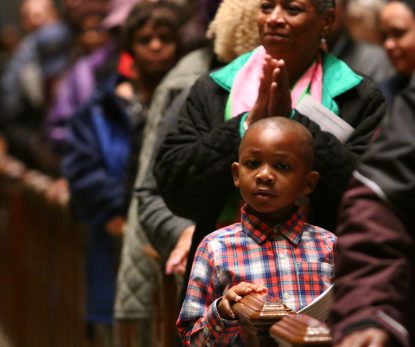 It was Pho’s co-worker who shared her Catholic faith during breaks at their workplace. Pho, a San Diego native, said she has Catholic extended family who live in various parts of the Southwest.

Among those present were the Knights of Peter Claver and the Ladies Auxiliary, one of the oldest Catholic philanthropic groups founded by four African American priests in 1909.

Two busloads of parishioners came to the cathedral from two Northwest Philadelphia parishes, St. Athanasius and St. Raymond of Penafort.

The Mass was coordinated by the archdiocesan Office for Black Catholics under the direction of Father Richard N. Owens, O.F.M. Cap.

Toni Antoinette Reaves, the assistant coordinator for the event, was grateful to Father Owens and choir director Kenny Arrington for their collaborative efforts in planning the Mass. Choir members from several parishes met every Sunday afternoon for two hours at St. Raymond Church to prepare for the Mass, she said.

“For us St. Martin de Porres is like our Black bishop,” said Reaves. “He is being honored today for his stewardship, being a great servant and for his humility. He is a priest who showed great reverence for God.”

“There are many different kinds of saints, but I do have a special place for St. Martin de Porres, too,” Reaves said.

After the scriptural readings from Philippians 4:4-9 read by Floretta Caudle and the singing of the Responsorial Psalm 131, the Gospel reading was proclaimed by Deacon Anthony Willoughby.

In his homily Bishop Fabre traced the life of St. Martin de Porres and how despite being reared in poverty without an intact family, he led a faithful life. The bishop said St. Martin’s focus was on God and helping others.

After the event, Father Owens said it was the first time an African American bishop presided over the St. Martin de Porres Mass in Philadelphia.

“Typically, the African American bishop is invited to preach, so the fact that Bishop Fabre presided and preached shows the commitment of our archbishop and the Philadelphia Archdiocese to the Office of Black Catholics,” said Father Owens. “Also, the immense turnout despite the weather shows the commitment of the local parishes to this event.”

St. Martin de Porres was born in Lima, Peru in 1579, the illegitimate son of a Spanish solider and an African freedwoman from Panama.

At a young age he entered the Dominican order as a lay brother and by 1603 had become a full-fledged Dominican brother. He was famous for his intercession to God for miracles, extreme acts of penance and long hours of prayer. His feast day is Nov. 3. He is the patron saint of African American Catholics, mixed-race people, innkeepers, barbers and public health workers.

November was chosen as Black Catholic History Month by the National Black Catholic Clergy Caucus of the United States in 1990, in part to coincide with St. Martin’s feast and the birthday of St. Augustine of Hippo, Nov. 13.

The Philadelphia Catholic Gospel Mass Choir was formed in 2014 in anticipation of the visit of Pope Francis to Philadelphia in 2015. The choir was so well-received that they decided to continue to perform during Black Catholic History Month and at the annual Soulful Christmas Concert at the Kimmel Center coming up Dec. 11. See the choir’s Facebook page here. 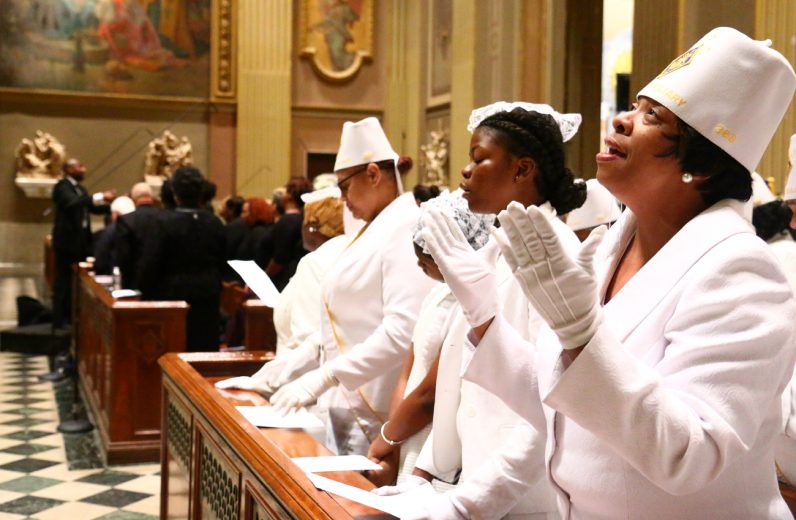 Crystal Mills-Peyton of the Ladies Auxiliary of St. Peter Claver, and a St. Athanasius parishioner, gives praise to the Lord.

NEXT: Tapped by the faithful, men are Called by Name to priesthood