Tapped by the faithful, men are Called by Name to priesthood 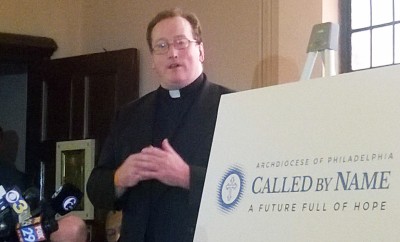 Father Stephen DeLacy, director of the Vocation Office for Diocesan Priesthood, described the Called by Name initiative first launched in archdiocesan parishes in 2015. The outreach is being revived for the 2018 National Vocation Awareness Week.

During this year’s National Vocation Awareness Week (Nov. 4-10), an unusual initiative to identify future priests is making a comeback.

The Archdiocese of Philadelphia’s Vocation Office for the Diocesan Priesthood is reviving “Called by Name,” an initiative that invites the faithful to suggest possible candidates for priestly service. The office debuted the program back in 2015 in conjunction with the World Meeting of Families.

Back in 2015, both clergy and parishioners throughout the archdiocese nominated several young men, a number of whom entered the discernment process. Some of these candidates are now in formation at St. Charles Borromeo Seminary in Wynnewood.

At its heart, the “Called by Name” program is designed to develop a broader culture of vocations.

According to Father Stephen DeLacy, director of the vocation office, the outreach will in the near term “generate more names of men potentially considering the priesthood.”

In the long run, he said, the initiative “will help parishes to grow the skill sets … needed to foster vocations.”

“One of the most amazing joys and graces in the church is helping others discern God’s will,” he added. “It personally brings me great joy in helping the men who are discerning a call to the priesthood.”

However, that task isn’t the sole responsibility of Father DeLacy and his team.

“This is a mission shared by the entirety of the church, including the lay faithful,” he said.

The vocation office works with all of the archdiocese’s 217 parishes as well as schools and Catholic organizations to spread awareness of vocations, and renewed efforts over recent years have resulted in a significant increase in the number of seminarians in formation at St. Charles Borromeo Seminary.

Since 2013, seminarian enrollment for the Archdiocese of Philadelphia has doubled to nearly 80 seminarians in active formation. The current growth is no reason for complacency, however, and Father DeLacy continuously looks for new ways to engage both potential discerners and the faithful at large.

Studies by the Center for Applied Research in the Apostolate (CARA) at Georgetown University have shown that encouragement from family and friends significantly impacts vocational development. Building on that finding, Called by Name encourages each of the faithful to consider the men in their lives who have the qualities that make for a good, holy priest.

Beginning Nov. 11, participating parishes will roll out Called by Name through homilies, bulletin announcements and personal testimonies. Over the following two weekends, parishioners will be asked to write the names of potential priests on nomination cards. Pastors will then contact those listed and invite them to one of several area Holy Hours for vocations that will take place throughout the archdiocese on Jan. 6, 2019.

The Holy Hours will also be open to all the faithful as an opportunity to pray for current and future priests. A complete list of the times and locations is available at heedthecall.org/holyhour.

Father DeLacy has set a measurable goal for the second Called by Name campaign.

“My hope is for this program to generate 30 more men discerning the priesthood,” he said, noting that this number would offset the downward trend of active archdiocesan priests due to retirements and death.

At the same time, Called by Name is only part of an ongoing search for men considering life as a priest. Father DeLacy offers year-round opportunities for discerners at every step in their journey.

Chief among these opportunities are the “Come and See Weekends,” two-day retreats at the seminary that enable participants to get a taste of priestly life. The next weekends will take place Dec. 8-9 for high school youth and Jan. 18-20, 2019 for post-high school men.

More information about the vocation office and its programs can be found at heedthecall.org. Those who wish to nominate candidates for the priesthood can do so directly by visiting heedthecall.org/calledbyname and then clicking on “Suggest a Candidate.” Submissions will be sent directly to Father DeLacy.

NEXT: Certified for success in Microsoft, and in life, at St. Gabriel’s Hall