Anti-Semitism of past generations flared anew in Pittsburgh shooting 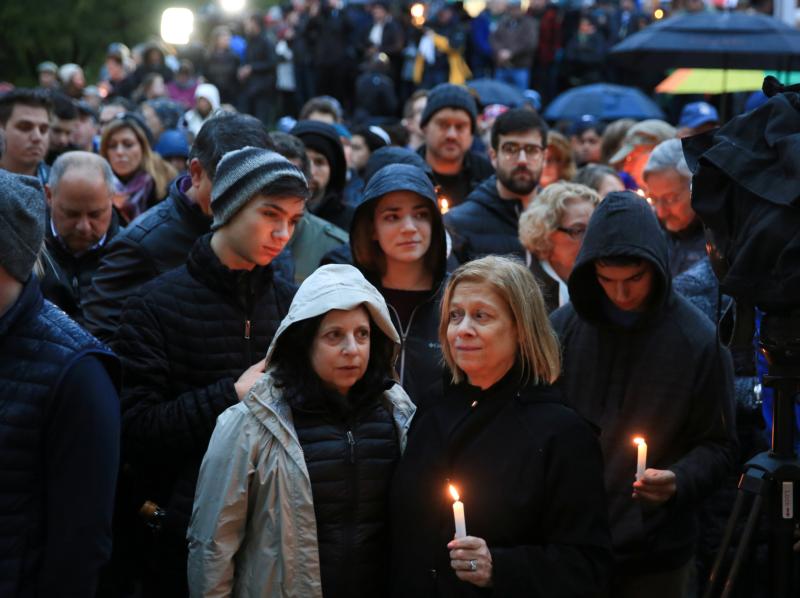 People mourn the loss of life as they hold a vigil for the victims of the Tree of Life Synagogue shooting in Pittsburgh Oct. 27. Pope Francis at his Sunday Angelus prayed for those affected by the attack inside the Pittsburgh synagogue. (CNS photo/John Altdorfer, Reuters)

WASHINGTON (CNS) — In some quarters, people thought anti-Semitism had been swept under the rug. But hiding it didn’t mean getting rid of it, as was painfully evident in the murder of 11 congregants at a Pittsburgh synagogue Oct. 27.

“There have always been people who are prejudiced anti-Semites, racists, but what we’re seeing is that these people have easy access to do a lot of damage and that’s a very scary combination,” said Rabbi Shmuel Herzfeld of Congregation Ohev Sholom in Washington in an Oct. 30 telephone interview with Catholic News Service.

Rabbi Herzfeld had chartered a bus for members of his synagogue to go to Pittsburgh and mourn at funerals for some of those killed. He estimated the bus was about a half-hour from Pittsburgh when CNS contacted him. The bus, he noted, was filled.

“This is of a different order,” said Eugene Fisher, a professor of Catholic-Jewish studies at St. Leo University in Florida. “There’s a difference between painting a swastika on a synagogue and going in with a gun.”

Fisher, formerly associate director for ecumenical and interreligious affairs at the U.S. Conference of Catholic Bishops, noted how the roots of anti-Semitism had its start in overwhelmingly Christian Europe.

“There was the historical Christian teaching of contempt of Jews — they did terrible things and poisoned wells, and Jews were expelled from virtually every country in Western Europe … except for Italy where they were protected due to the papacy,” he said.

While Jews were confined to ghettos in Italy, Fisher said, popes took to heart what St. Augustine had written, that “you can’t read the New Testament intelligently without the Hebrew Scriptures. Whenever Jesus said something, he was referring something in his Bible, the Hebrew Scriptures,” more commonly known to Christians as the Old Testament.

Religious animus turned into racial hatred with, ironically, the onset of the Enlightenment, when Jews were viewed not as a members of a religion but as members of a race. This, Fisher said, was done to “codify hatred of the Jews.”

“According to modern racial anti-Semitism, which the Nazis picked up on and used to justify the Holocaust, you couldn’t convert (to Christianity). You were racially inferior and racially like vermin. … You had to be exterminated like you had to exterminate cockroaches,” Fisher said.

Even in the New World, Jews could not escape the hatred that existed in Europe. But they were not the only group to suffer.

Rabbi Herzfeld has a three-pronged solution to counter modern anti-Semitism.

Rabbi James Rudin, director of interreligious affairs for the American Jewish Committee for 32 years until his retirement, spent the first six years of life growing up in the Squirrel Hill neighborhood of Pittsburgh where the Tree of Life Synagogue, the site of the shooting, is located. Cecil and David Rosenthal, two of the victims, were second cousins of Rudin.

Greeting fellow worshippers each Saturday was “what they lived for. This was their community,” Rabbi Rudin said of his cousins. “I’m crying now. But they loved, and were loved.”

While anti-Semitism has seemed less virulent in the United States — though Fisher noted an increase in reported incidents in each of the last two years — “in the United States we had a saying: Our job, and the job of enlightened Christians and Christian leaders, was to keep the lid on the garbage can, because within the garbage can is religious bigotry, anti-Semitism, racism, violence,” Rabbi Rudin said.

“And our job continues to be to keep the lid on so that pathology doesn’t get into the mainstream of American life.”

NEXT: Delaware DOJ opens review of files of clergy, other personnel in diocese