Archbishop Gomez: ‘Pray hard’ for all affected by California shooting 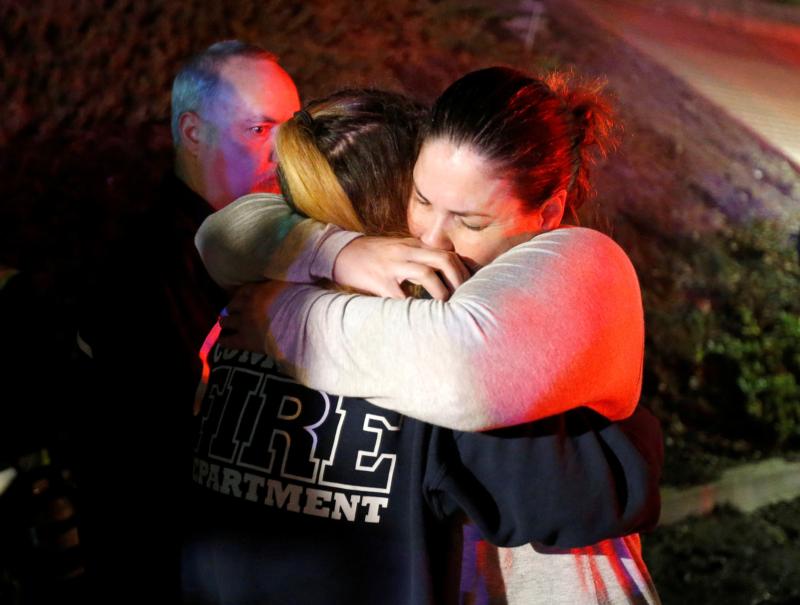 UPDATED – THOUSAND OAKS, Calif. (CNS) — Los Angeles Archbishop Jose H. Gomez urged those attending a prayer vigil Nov. 8 to honor the memory of the victims killed in a shooting spree the evening before “by living our lives with greater intensity and purpose and with greater love for one another.”

“May our Lord in his mercy receive the souls of those who have died, and may he comfort those of us who have been spared,” he told the congregation at St. Paschal Baylon Catholic Church in Thousand Oaks. “We pray for peace in our communities and for peace in the hearts of all those who are troubled and disturbed.”

Late Nov. 7, a gunman opened fire at a country-music bar in Thousand Oaks, about 40 miles from the heart of Los Angeles.

Thirteen people, including the suspected gunman and a 29-year veteran of the Ventura County Sheriff’s Department, died in shooting at the Borderline Bar & Grill on what was college night, with lessons on country two-step dancing.

The bar is popular with students at nearby California Lutheran University, and also attracts students from Pepperdine University in Malibu, Moorpark College in Moorpark and California State University-Channel Islands in Camarillo.

Ventura County Sheriff Geoff Dean said Nov. 8 that the suspected gunman, Ian David Long, had legally purchased the weapon used in the shooting. It came less than two weeks after a gunman murdered 11 worshippers in a Pittsburgh synagogue, which was the largest mass murder in the United States since 17 were killed at Marjory Stoneman Douglas High School in Parkland, Florida, last Feb. 14.

According to the Associated Press, after Sgt. Ron Helus was shot multiple times and dragged outside the bar by his partner — he died early Nov. 8 at a nearby hospital — scores of police assembled outside and burst in later to find Long and 11 others dead. Eighteen others were injured.

Long, who had been wearing a black hood during the spree, was a former U.S. Marine machine gunner, and authorities said he may have suffered from post-traumatic stress disorder.

At the vigil, Archbishop Gomez told the congregation he brought with him “the prayers of the whole family of God here in the Archdiocese of Los Angeles.”

“We are all so sad in the face of a violence that just makes no sense. We open our hearts to the families and friends of those who were killed, and we try as best we can to share their grief with them,” he continued.

In his homily, Father Rocha admitted he could not answer the question of why this all had happened, only that “people are going through their own tests and trials and sometimes they communicate their own problems in horrific ways.

“We stop and pause and reflect upon our own mortality and our relationship with God.” Also remember, he said, that “healing takes time … your grieving is among the most sacred and human things you’ll ever do. Honor it, and healing will take place.”

Thousand Oaks Mayor Andrew Fox stood at the lectern at the church and asked for three things: “I’m going to steal a bit from St. Paul, but I want to talk about faith, hope and love.”

Fox had already spent the morning and afternoon speaking to national and local media about the shock that affected his tight-knit community. Then he attended a civic center candlelight gathering of more than 1,800 in attendance that focused on the theme of “Thousand Oaks Strong.”

But as the long sorrowful procession turned into night, and a local wildfire had now come into play that also challenged the citizens’ levels of anxiety and anguish, Fox said he felt “at home here at St. Paschal with my Catholic brothers and sisters,” where he and his family are parishioners.

Fox, who attended the service with his wife, Letitia, said: “We are fortunate as Catholics because our faith is strong, and we actually believe Christ died for our sins, so we pray for that same faith for those families that lost loved ones, many of them at a very young age.”

Hope, he continued, is about “a better tomorrow. A better next week.” As for love, Fox said he was “reminded of Scripture just last week when Jesus was asked about the two greatest commandments. He said: ‘Love God with all your heart, and love your neighbor as yourself.'”

In a statement issued the morning of Nov. 8 in reaction to news of the shooting, Archbishop Gomez asked people to “pray hard” for the victims and their families.

“Like many of you, I woke this morning to news of the horrible violence last night at the Borderline Grill in Thousand Oaks,” he said.

“Let us pray hard for all the families, for those who were murdered and those who were injured, and in a special way for the heroic officer, Sgt. Ron Helus, who lost his life defending people in the attack. May God grant perpetual light to those who have died and may he bring comfort to their loved ones and peace to our community.”

Cardinal Daniel N. DiNardo of Galveston-Houston, president of the U.S. Conference of Catholic Bishops, in a Nov. 8 statement asked all to pray “for the victims and their loved ones and all those impacted by this senseless violence.” He also called for the enactment of reasonable measures to end gun violence.

“We must bring this tragedy to the Lord in prayer,” said the cardinal. “This new incident of gun violence strikes just as the funerals are barely complete from the last mass shooting.

He added: More innocent lives are lost because of one individual and his ability to procure weapons and commit violence. The bishops continue to ask that public policies be supported that would enact reasonable gun measures to help curb this mad loss of life.”

“Only love can truly defeat evil,” Cardinal DiNardo said in his statement. “Love begets love, and peace begets peace, but anger, hatred and violence breed more of the same.”

Contributing to this story was Tom Hoffarth, who writes for Angelus News, the multimedia news service of the Archdiocese of Los Angeles.

PREVIOUS: Buffalo bishop responds to criticism, says he has no plans to resign

NEXT: Guam’s Agana Archdiocese to file bankruptcy, reorganize under Chapter 11