Best practices? ‘What is best for victims,’ says California bishop 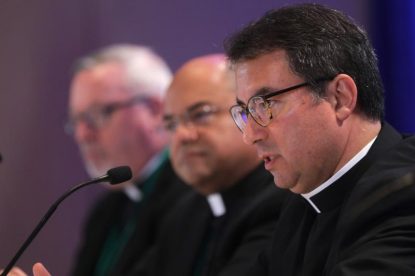 BALTIMORE (CNS) — As the U.S. bishops, individually and collectively, pursue “best practices” in their dioceses and for the country on how to deal with another clerical sexual abuse scandal in their midst, Bishop Oscar Cantu of San Jose, California, said best practices are simply “what is best for victims.”

And, despite listening to victims of abuse tell their stories, determining what’s best may not be so clear cut.

“When the victim sees the name of their abuser on the list publicly, that helps them,” Bishop Cantu told Catholic News Service in a Nov. 14 interview following that day’s general session of the U.S. bishops’ meeting in Baltimore.

Further, when an abuse victim still holding on privately to the memory of past abuse sees the name of the abuser published in a list, “it emboldens them to come forward,” Bishop Cantu said.

Now, however, a new strain of thought has emerged that seeing the list of names, including that of a victim’s own abuser, is “another wounding. They’re retraumatized by listening to this horrible reality of abuse over and over,” he added. “It’s one of the things we’ve been told by professionals — so I assume that it’s correct — every time that we released a new list of names people feel retraumatized.”

This was one of the issues California’s bishops were wrestling with when the met jointly a couple of weeks prior to the U.S. bishops’ Nov. 12-14 meeting in Baltimore. “Can we agree on one single day for the release of names? It’s hard to do,” Bishop Cantu said.

But therein lies another dilemma: What constitutes “credibly”?

“Part of the issue was the definition of ‘credibly.’ If there’s no clarity, how do we define it, what the standard is?” Bishop Cantu said. “Each bishop, with their team, has used their best judgment.”

Another sticking point is in canon law, according to Bishop Cantu. When the accused priest’s rights and the rights of his accuser are given weight, “canon law is specific and heavy in its protection of the rights of priests,” he said, “and I personally believe we’re going to have to relook at canon law and to weigh that against the rights of those who are abused.”

One such concern he mentioned to CNS is the experience of bishops who have petitioned the Vatican for the laicization of priests known to have abused those in their care, and “they received a ‘no’ vote from Rome,” so priests “who were credibly accused” are not laicized. “And that was voiced over and over by several bishops,” Bishop Cantu said.

What are considered best practices has changed over time as well. “We saw this to a good extent with Cardinal (Donald W.) Wuerl; in many ways he was following best practices at the time,” Bishop Cantu said.

He was referring to an Aug. 14 grand jury report detailing sexual abuse claims and how they were addressed in six Pennsylvania dioceses over a 70-year period, starting in 1947. The report painted a mixed picture of how then-Bishop Wuerl handled some cases when he headed the Diocese of Pittsburgh from 1988 until 2006.

After the grand jury report’s release, Cardinal Wuerl faced pressure to resign as head of the Washington Archdiocese. Now 78, he had submitted his resignation to the pope when he turned 75, as required by canon law, but it was not accepted until this fall. Pope Francis accepted the cardinal’s resignation Oct. 12 and named him apostolic administrator to oversee the archdiocese until a successor is named.

As for past standards for dealing with sex abuse, “they’re not adequate (for) our standards now, 30 years later, and it was mentioned at the public setting (of bishops) as well in the past couple of days,” Bishop Cantu said.

“Bishops received advice from the professional laypeople who were also psychologists and therapists: ‘This person has gone through therapy and healed, and is OK to return to ministry,'” he said. “So we were listening to laypeople 20-30 years ago. That information is dead wrong.”

Bishop Cantu applauded the revelation in September by Father Brendan McGuire, a priest in the San Jose Diocese, of the abuse he suffered as a teenager at the hands of a priest.

“It was powerful in that here’s someone who’s a priest, obviously, who had never come forward himself to share this experience,” Bishop Cantu said. “But it bubbled up because of the Pennsylvania report. That lends witness to what happens when those who have been abused and have suppressed it for decades, that when they hear all of this happening, and the reports and the release of names, that it brings that to the surface again.”

PREVIOUS: Bishops see much they can do despite no vote on steps to address abuse

NEXT: Missouri bishop calls for ‘resolute action’ in response to abuse crisis