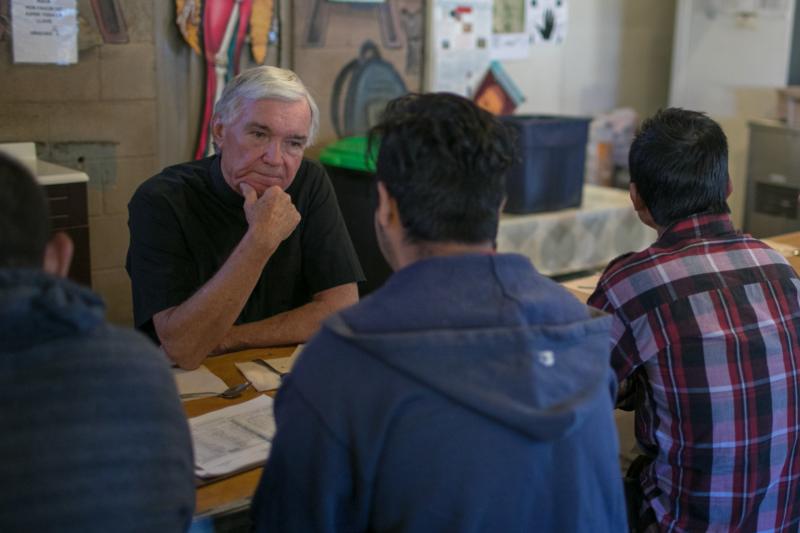 Father Jack Wall, president of Catholic Extension, listens Nov. 8 to one of the migrants who were legally paroled from detention by Immigration and Customs Enforcement in El Paso, Texas. (CNS photo/Rich Kalonick, courtesy Catholic Extension)

CHICAGO (CNS) — Catholic Extension has given $25,000 in emergency funding to a facility in the Diocese of El Paso, Texas, and is urging donors around the country to provide aid to meet the needs of migrants being released from detention daily.

The Chicago-based national organization, which financially supports Catholic ministries among the poor and marginalized, announced the funding Nov. 15. It said it was just an initial amount and that it plans to make subsequent grants to other migrant ministries in the months ahead.

The $25,000 is going to Annunciation House, which has been serving migrants in the El Paso area since 1978.

A news release from Catholic Extension about the funding said the facility has had to step up its efforts due to a recent increase of migrants being released from Immigration and Customs Enforcement detention.

They are being released prior to their immigration court hearing and without places such as Annunciation House, they would “have nowhere to go for assistance,” the release said.

“In court, they will attempt to establish credible fear of returning to their home country, in hopes of eventually receiving asylum,” said Catholic Extension, which described the current situation at the U.S.-Mexico border as a “humanitarian crisis.”

The funds for Annunciation House will help meet migrants’ basic needs, such as warm meals, clothes, showers, a place to sleep and phone calls to family. Hundreds are being released daily by ICE.

Catholic Extension officials visited the El Paso Diocese the week of Nov. 5 and saw the needs firsthand of people seeking legal asylum in the U.S.

“Most of the people we met were parents, clinging to their children,” said Father Jack Wall, president of Catholic Extension. “They told us stories of the extortion, kidnappings, and threats of violence to them and their children that they endured in their home countries.”

“We could see the terror and pain in the eyes of the parents, many of whom were escaping criminals who promised to kidnap, rape or disembowel their children,” said Joe Boland, Catholic Extension’s vice president of mission.

Boland added: “As a church, we must do our part to help these parents protect the innocent little ones. We thank God for the ready hospitality provided by these church-run shelters, which sprang into action to help restore hope and human dignity among these migrants who have been through so much.”

In the past two weeks, numerous temporary shelters have opened, coordinated by Annunciation House, to accommodate the increase in numbers of released migrants. These shelters have collectively served 2,400 per week for the past several weeks “with no signs of slowing down,” according to Catholic Extension.

Many in the shelters are parents with young children seeking to reunite with their family members throughout the U.S. while awaiting their court dates.

“Our whole purpose here is to provide hospitality knowing that, as Jesus comes to our door as an immigrant in need of food and shelter, we provide that,” said Veronica Rayas, director of the office of religious formation for the Diocese of El Paso.

Rayas has been running a temporary shelter out of Centro San Juan Diego, which normally functions as an after-school center for children.

Catholic Extension said the funds it is supplying come from a Family Reunification Fund it created earlier this year to help families separated at the border.

NEXT: Once ‘spiritual, not religious,’ a millennial finds freedom in Catholicism