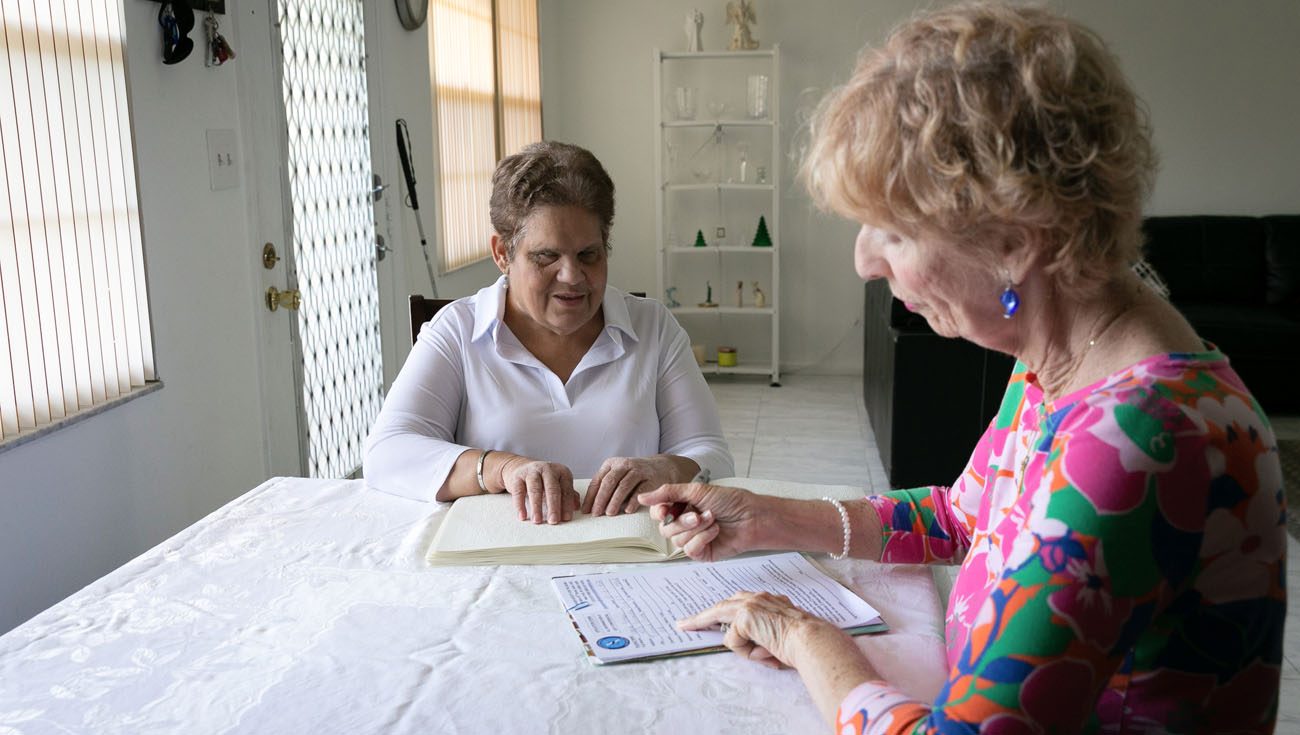 Resident Lygia Bohan of Coconut Creek, Fla., who attends All Saints Parish in Sunrise, reads Catholic materials in Braille in early May, including the Sunday Mass readings she reviews before church. With her is Lighthouse Point resident and longtime disabilities advocate Dolores Hanley McDiarmid, who attends St. John the Baptist Church in Fort Lauderdale. (CNS photo/Tom Tracy)

COCONUT CREEK, Fla. (CNS) — In relocating to this community north of Fort Lauderdale, Lygia Bohan thought she misplaced her beloved childhood Catholic prayer book, written in Braille. She hopes, for sentimental reasons, it will eventually turn up.

Now a regular Massgoer at All Saints Parish in Sunrise, the New York native has been blind since childhood. She was born in an era when some premature babies were exposed to unregulated oxygen levels in their incubators, causing permanent damage to their sight. The condition is called retrolental fibroplasia and Terry syndrome.

The oxygen therapy was used when a newborn child’s lungs were not fully developed.

“In elementary school I went to Lavelle School for the Blind in the Bronx, and that is where I was taught about the Catholic religion,” Bohan said. “That is where they gave me a Braille prayer book. I loved that book. I must have lost it in the move some years ago.”

Bohan reads along with the Sunday Mass and uses other Catholic publications prepared in Braille provided by the Xavier Society for the Blind. She also makes use of the array of digital communication tools that have enhanced modern life for everyone.

“I listen to the radio, and on the internet I can get things,” she said. “I have an iPhone and can access audio programs there, things through streaming media.”

Malachy Fallon, executive director of the New York-based Xavier Society, noted some of the newer technological advances that are specifically enhancing religious education and other materials for vision-impaired Catholics.

Xavier Society is a longtime publisher of the Mass Proper, Catholic books and religious magazines in Braille, including the Catechism of the Catholic Church. It distributes materials at no cost to Catholics and relies on donations for its ministry. Its website is www.xaviersocietyfortheblind.org.

“Not everyone has one, but with a refreshable Braille display, you can download a Braille ready file (BRF) to your BRF device and it can be read on the display as refreshable Braille. That is a great way for us to reach more people and use technology,” Fallon said.

Xavier also wants to expand its reach through an audio player-reader system developed by the National Library Service for the Blind and Physically Handicapped, which provides its reader devices for free along with their audiobook offerings. One shortcoming is that the cartridge format is not yet compatible with the CD form of audio books in the Xavier Society collection.

Xavier has purchased a software license to use the new technology and is exploring how to convert its Catholic materials so they are compatible with the National Library Service, Fallon said.

“Half a million Americans have those readers; it is very easy for someone to use compared to our current technology of using CDs,” he explained. “The new technology is more flexible in terms of moving around in the book and all sorts of (navigational) things a reader with vision wouldn’t think about. The way the cartridges and content is formatted makes it easier to use.”

Other new-technology tools available to the vision-impaired include an array of personal computer software options for accessing, navigating and consuming general content on the internet.

While younger Catholics with vision impairment may be quick to tap into the expanding technology, older Catholics with blindness — or those living alone or in out-of-the-way places — often are less likely to access and acquire technology so they can download content.

“It would be great if everyone could download our BDF file, but we still print 800 Mass Propers for four weeks of Masses at a time, with 750,000 pages of Braille created annually,” Fallon said. Braille books can often cost upward of $500 and take six months to produce.

Xavier Society maintains an in-house transcriber as well as a working relationship with National Braille Press, which produces and distributes some of the larger runs of its religious education materials including textbooks and workbooks for children in religious education programs.

In Miami Shores, Adelina Maideski, a retire drug store worker, recalls having poor vision as a youngster in Cuba, where she worked with a congregation of religious women until the Castro revolution prompted her to leave with the nuns for North America.

Special glasses and contact lenses helped Maideski manage life first in Illinois and then Florida, but she gradually began losing her vision during adulthood, forcing her to quit working in 1998.

With the help of the Lighthouse of Broward, a Fort Lauderdale-based educational and resource center for the blind, she learned to read Braille.

“I knew very little about the computer but was fascinated with Braille and I did three books very, very fast, and I took a lot of courses, using large print and Braille materials from the library,” said Maideski, who subscribes to Xavier Society materials and attends St. Martha Church in Miami Shores.

“Before I was only listening to the priests and the Mass readers, and now I can read,” Maideski said. “I don’t go to Mass every day but when Sunday and holy days come I already know what prayers and readings and Gospels will be, especially through reading that in the evening beforehand.”

Without the Braille Mass Proper, she added, “I would be lost, because I don’t see anything at all.”

PREVIOUS: Landscape for those with disabilities changed since bishops’ statement