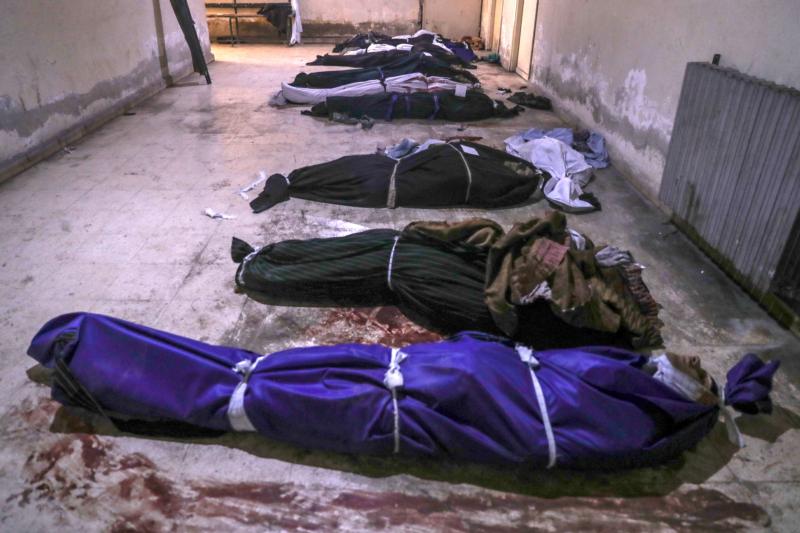 Bodies of people allegedly killed by Islamic State militants are seen on the floor of a morgue in late February in Douma, Syria. The U.S. House Nov. 27 passed a measure to provide humanitarian relief to victims of genocide in Iraq and Syria and hold IS “accountable.” (CNS photo/Mohammed Badra, EPA)

The Iraq and Syria Genocide Relief and Accountability Act of 2018, or H.R. 390, now heads to President Donald Trump for his signature. The White House has said it supports the legislation. The Senate also has passed its version of the measure unanimously.

“When genocide or other atrocity crimes are perpetrated, the United States should direct some of its humanitarian, stabilization and recovery aid to enable these groups to survive — especially when they are minorities whose existence as a people is at risk,” Rep. Chris Smith, R-New Jersey, said in remarks from the House floor before the vote. “We should commit to such a response whether the victims are the Rohingya in Burma or Christians and Yezidis in Iraq and Syria.”

Smith, who is chairman of the House Subcommittee on Africa, Global Health, Global Human Rights, introduced the legislation in 2016 and again in 2017, with lead Democratic co-sponsor Rep. Anna Eshoo, D-California. More than a dozen Democrats and Republicans also co-sponsored H.R. 390.

He noted that he had just met earlier that day Chaldean Archbishop Bashar Warda of Irbil, Iraq, and the prelate told him: “Christians in Iraq are still at the brink of extinction. H.R. 390 is vital to our survival. If it becomes law, implementation must be full and fast. Otherwise, the help it provides will be too late for us.”

Among its key provisions, the bill directs the administration to:

— Fund entities, including faith-based ones, that are providing humanitarian, stabilization, and recovery aid on-the-ground to genocide survivors from religious and ethnic minorities.

— Assess and address the humanitarian vulnerabilities, needs, and triggers that might force these survivors to flee.

— Identify warning signs of deadly violence against religious and ethnic minority communities in Iraq or Syria that have been victims of genocide, crimes against humanity or war crimes.

— Support entities conducting criminal investigation into ISIS perpetrators of genocide, crimes against humanity and war crimes in Iraq – including collecting and preserving evidence that links specific perpetrators to specific atrocity crimes and is usable in a range of courts.

— Encourage foreign governments to add identifying information about suspected ISIS perpetrators to their security databases and security screening and to apprehend and prosecute perpetrators.

A number of religious liberty organizations, human rights activists, and faith-based and other advocacy groups threw their full support behind H.R. 390, including the Knights of Columbus, In Defense of Christians, the U.S. Conference of Catholic Bishops, Family Research Council, the Ethics and Religious Liberty Commission of the Southern Baptists Convention, the 21st Century Wilberforce Initiative, the Religious Freedom Institute, and the Hudson Institute’s Center for Religious Freedom and its Working Group on Christians and Religious Pluralism in the Middle East.

“The Knights of Columbus applauds the passage of H.R. 390, which makes clear that those targeted for genocide by IS should be included in American government assistance in the region, said Supreme Knight Carl Anderson, who twice testified in support of the bill before Smith’s House subcommittee.

Smith told House members that Anderson’s testimony “was the blueprint for the legislation.” He praised the Knights for being “unflagging supporters of the bill.”

Since 2014, the Knights of Columbus has committed more than $20 million for relief efforts on behalf of Christians and other religious minorities in the region.

“The fact that this bill passed both the House and the Senate unanimously,” Anderson added, “shows that the American response to genocide transcends partisanship and that there is enormous political will to protect and preserve religious minorities in the Middle East, including Christians and Yezidis, who were targeted for extinction.”

USCCB officials also have given testimony to Smith’s subcommittee in support of H.R. 390.

“The Catholic Church has consistently raised our voice in support of Christians and other religious and ethnic minorities who are facing persecution in the Middle East and are internally displaced or have fled as refugees,” said a 2017 joint letter from the chairmen of the bishops’ Committee on International Justice and Peace and Committee on Migration.

“Pope Francis has denounced the persecution, torture and killing of Christians in the Middle East, calling it a ‘form of genocide’ that must end, and lamenting the wider conflicts that have put so many in danger,” the letter said. “The USCCB has joined with Pope Francis in condemning the actions of those who would persecute others solely for reasons of their faith and ethnicity.”

The House action came amid a tribute to today’s Christian martyrs underway at several U.S. churches as part of a worldwide “Courage in Red” campaign sponsored by Aid to the Church in Need, the international papal charity that provides pastoral and humanitarian aid to persecuted Christian communities.

Catholic places of worship were lit up in red, the color of martyrdom, including Washington’s Basilica of the National Shrine of the Immaculate Conception, which was holding an evening vespers service Nov. 28. Archbishop Warda was scheduled to be among the speakers offering testimony about religious persecution.

Archbishop Timothy P. Broglio of the U.S. Archdiocese for the Military Services, who is the current chair of the bishops’ Committee on International Justice and Peace, was presiding, with Archbishop Christophe Pierre, apostolic nuncio to the U.S., to deliver a message from the Vatican.