Immigration eclipsed, but not forgotten at bishops’ meeting 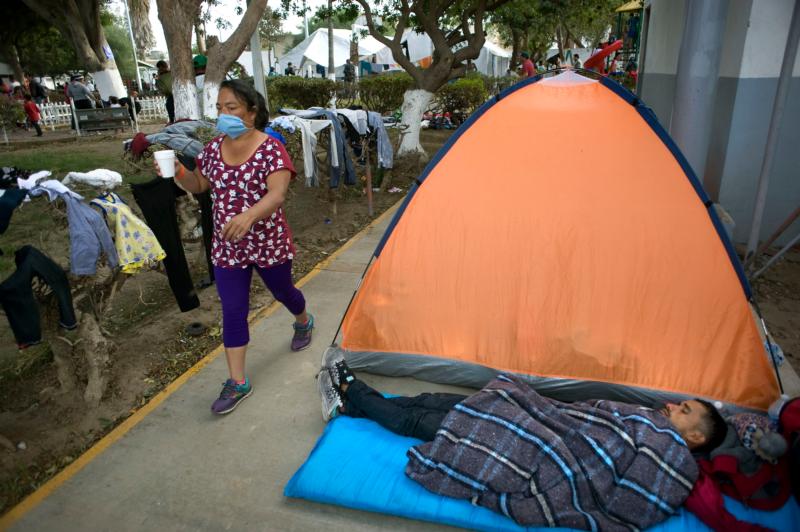 A man sleeps on the grounds of a camp at a sports facility in Tijuana, Mexico, set up to for people arriving Nov. 15 in a caravan of Central American migrants at the U.S.-Mexico border. The shelter opened the previous night and had more than 750 people, but dozens more lined up outside waiting to enter. (CNS photo/David Maung)

BALTIMORE (CNS) — A small button that said “defend migrants” pinned on the jacket of El Paso Bishop Mark J. Seitz of Texas was one of the few reminders of a topic that dominated much of the 2017 fall meeting of the U.S. Conference of Catholic Bishops, but one hardly mentioned just a year later.

While thanking the leadership of the U.S. Conference of Catholic Bishops for a July visit to detention centers where migrant children were being held and to shelters helping recently arrived migrant families in southern Texas, Bishop Daniel E. Flores of the Diocese of Brownsville reminded bishops gathered for the Nov. 12-14 meeting that the plight of migrants remains a great concern for the church.

“At our last meeting, which seemed like a long time ago, we were very concerned, and rightly so, at the separation of mothers and children,” said Bishop Flores, publicly addressing the fall meeting of the USCCB Nov. 13.

“And there was even a delegation from the conference that came to my diocese, which the cardinal (USCCB president Cardinal Daniel N. DiNardo) led, and for which I’m very grateful,” Bishop Flores said, “because they saw these young people on the periphery, or in detention centers and who are in very difficult situations. This is to remind us that this continues to be part of the mission of the church.”

As policy decisions from Washington brought about the detention of children at the border and the separation of families that caused great outrage in the summer, the U.S. bishops moved into high gear to denounce the practices and drew the public’s attention to their plight during a highly publicized visit to the border.

But after the current sex abuse crisis began in earnest this past summer with the publication of a grand jury report detailing decades of claims of sex abuse by clergy and other church workers in Pennsylvania and accusations that an American cardinal may have abused minors and sexually harassed seminarians, immigration seemed to take a back seat.

The sex abuse crisis dominated much of what the bishops discussed in their fall meeting, even as border bishops such as Bishops Flores and Seitz, along with Archbishop Gustavo Garcia-Siller of San Antonio, daily contend with humanitarian responses to welcome migrants running from violence and poverty in Central America and who face a wave of hostility and policy decisions directed at keeping them out of the land where they’re seeking shelter.

The “rhetoric” directed at immigrants is what worries Archbishop Garcia-Siller, who says it’s important that Christians understand that helping people in need is an important part of following in Jesus’ footsteps and that’s not a message some Christians are embracing.

The task may only become more urgent as conditions in Central America fail to improve and migrants travel in greater numbers headed for U.S. border cities as the Trump administration keeps firing back with threats for immigrants inside the country and those attempting to enter it.

“Young people and their mothers and fathers are still coming through the entire border, from California through Brownsville,” said Bishop Flores in a Nov. 12 interview with Catholic News Service.

Hardly discussing immigration during the bishops’ meeting was “unfortunate,” said Bishop Seitz, because it’s important “to have a voice (on the topic) on a national stage” given the current tide against immigrants. The focus on the current sex abuse crisis all but silenced the prelates’ collective voice on immigration issues at the meeting.

“It’s taken our attention from other critical issues, but that’s what sin always does,” said Bishop Seitz in a Nov. 13 interview with CNS, while acknowledging that the sex abuse crisis must be dealt with swiftly and requires immediate attention.

But for those who live on the border, the daily emergencies caused by policymakers in Washington make them scramble to find ways to help.

Most recently, Bishop Seitz found himself, along with others, looking for emergency shelter for confused migrant families who were abruptly dropped off at a bus station by immigration authorities in his border city of El Paso. The action was brought about by a sudden change in policy by immigration authorities who said, just before the midterm elections, that they were at overflow capacity trying to prepare for an imminent arrival of a migrant caravan. It was a practice that went away almost as quickly as it arrived.

“This urgency was premature, you might say,” said Bishop Seitz.

Bishop Flores had to recently deny federal authorities permission to survey church property for possible construction of a border wall or fence on it. The government has made a legal move to force the diocese to allow the action.

Bishop Flores said that while the topic of immigration may not have appeared to be on the front burner at the bishops’ meeting, it’s a topic that gets addressed at regional meetings, with bishops’ counterparts in Mexico, and by others in the church, men and women religious, as well as lay volunteers and church organizations that are constantly coordinating a humanitarian response along the border and speaking on behalf of migrants and in their defense.

“We really see a great witness on the part of so many anonymous volunteers who, in my diocese and in many dioceses along the border, every night prepare meals, and clothing and transportation for these mothers and children,” said Bishop Flores addressing the bishops.

Bishop Seitz said he, too, has experienced the generosity of local border communities in helping the migrants at their doorstep, and Catholic organizations, along with others, have long responded to their needs and will continue to carry out that mission. But the response of the bishops weighing in as a body still remains important, he said.

Bishop Flores said it’s important that they set the tone to remind others of the mission of the church and its responsibility to the poor.

“We have many grave matters to attend to, but the church that is formed by the eucharistic sacrifice is never more herself than when she hears and sees the people that nobody else wants to see, and these are our children also,” he said.

PREVIOUS: Once ‘spiritual, not religious,’ a millennial finds freedom in Catholicism