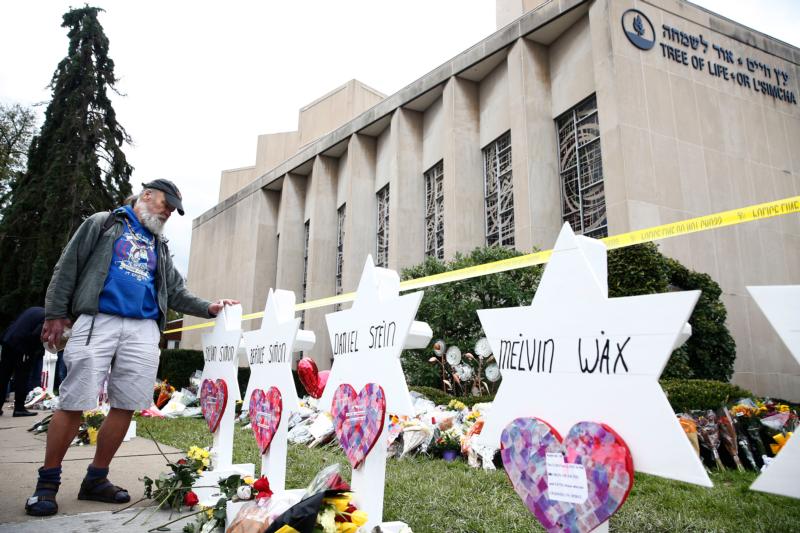 A man takes a moment at each of the Star of David memorials Oct. 29 with the names of the people who were killed at the Tree of Life Synagogue in Pittsburgh. At least 11 people were killed and six others wounded, including four police officers, during the Oct. 27 shooting at the synagogue. (CNS photo/Jared Wickerham, EPA)

PITTSBURGH (CNS) — Parishes throughout the Diocese of Pittsburgh will take up a special collection for the three Jewish congregations that worship at the Tree of Life Synagogue, which was attacked by a gunman.

Pittsburgh Bishop David A. Zubik asked that the collection be taken at all Masses the weekend of Nov. 10-11.

“This collection is a gift of love and solidarity from one religious community to another, to say that the Catholic people of southwestern Pennsylvania suffer with you and we are here to support you,” Bishop Zubik said in a statement Nov. 2. “The congregations at Tree of Life are free to use these donations in whatever way they believe is right, to help their members recover and to restore their house of worship.”

In announcing the collection, the diocese said families of the 11 people who died and two others who were injured faced expenses. The synagogue also sustained damage that will require repair and renovation.

A 46-year-old Pittsburgh man, Robert Bowers, has been charged with dozens of counts in federal court in connection with the Oct. 27 incident. He pleaded not guilty during a court appearance Nov. 1.

Police said worshippers recounted that the suspect allegedly shouted that “all Jews must die” before entering the synagogue in the Squirrel Hill section of the city and opening fire. Police said he was armed with three handguns and an AR-15 “style” weapon. He is believed to have acted alone.

NEXT: ‘Keep us in mind,’ says DACA recipient in urging people to vote