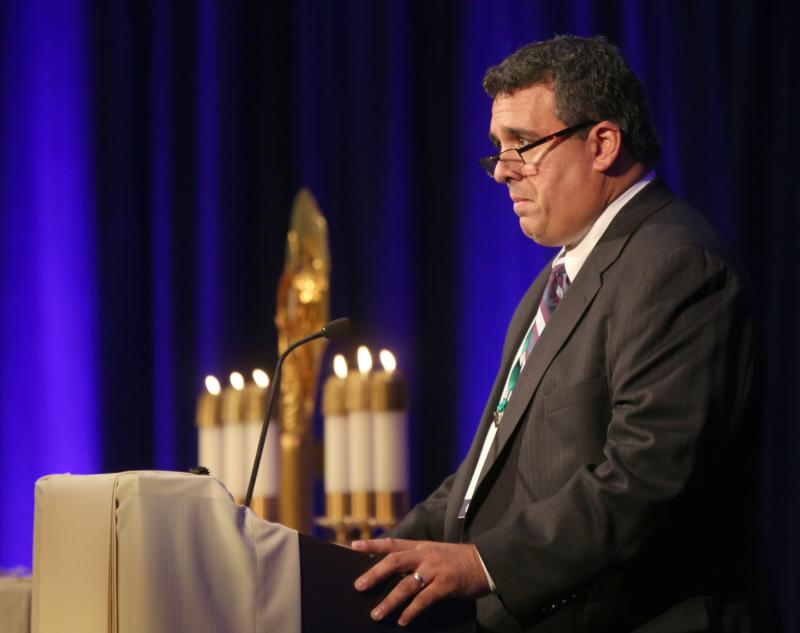 Luis A. Torres Jr., an abuse survivor, speaks to bishops in the chapel during a day of prayer Nov. 12 at the fall general assembly of the U.S. Conference of Catholic Bishops in Baltimore. (CNS photo/Bob Roller)

BALTIMORE (CNS) — Luis A. Torres Jr. stood before a group of U.S. bishops during one of the most publicly watched of their fall annual meetings Nov. 12 in Baltimore and in doing so revealed to the world the reality that he has lived with since childhood: that he was abused by a priest.

“I’m not private anymore. Everyone knows,” said Torres, a lawyer and member of the Lay Review Board of the Diocese of Brooklyn, New York, which examines policies for removing priests who have abused.

It was unclear but it seemed that the moment marked the first time he revealed the truth publicly. He also spoke of what he witnessed toward those who have come forward in the Catholic Church when they revealed what had happened to them at the hands of clergy.

He spoke of a church more concerned with the protection of assets than its people.

He told his story to the group of bishops gathered for prayer in a makeshift chapel at the Baltimore Marriott Waterfront. Though his statements were livestreamed, no press was allowed in the chapel.

In the telling of his pain through sometimes deep breaths, Torres told the bishops: “You need to do better.” He also told them that “the heart of the church is broken and you need to fix this now.”

Torres’ story was one of two experiences U.S. bishops heard from survivors of clergy child sex abuse, who still remain active in the church. The other account came from Teresa Pitt Green, who along with Torres, founded Spirit Fire Live, which says on its website that it is devoted to “healing and reconciliation in relationships with adults, families and parishes wounded by child abuse and trauma.”

“My heart breaks for you,” Pitt Green told the bishops, saying that “the Lord has cried more tears … because of some of the decisions some of you have made. I don’t know how you bear it.”

Neither was accusatory in tone, rather their declarations were given calmly as reflections during a day of prayer for the bishops, in which a reflection was given after a Bible reading. While two other reflections addressed what the laity need from the bishops and how bishops can be ministers of healing, the victim statements painfully painted the landscape that has brought the Catholic Church in the United States to address the sex abuse crisis so urgently.

Pitt Green spoke of the manifestation of the wounds by those who’ve been abused: suicides, addictions, chronic mental illness, broken relationships.

“We are the damaged goods of our age,” Pitt Green said.

Pitt Green said she had found a way back to the church and applauded measures that have been taken to curtail child sex abuse in Catholic churches, schools and institutions and thanked the bishops for expressing a desire to do something about it. But she also acknowledged the anger expressed by other victims and survivors, saying that “many who have been entrusted to your care are noisy and they’re angry, and I understand.”

Torres said he struggled with understanding and explaining even to himself what happened and the different manifestations of trauma as an adult.

“I admit, I don’t understand, so I get why you may not understand it either. Abuse of a child is the closest that you can get to murder and still possibly have a breathing body before you,” he said. “When a child has been abused, particularly by someone whom they trust, you have destroyed the child. You have mortally wounded the soul and the spirit of that child. This is particularly true where the abuse is by a priest.”

The abuse causes a break in the child’s connection to God, and robs him or her of innocence, trust, faith and love, he said.

“Truly, this is the devil’s best work,” he said. “It’s as if the child had been shot. Sometimes the bullet catches the child right away and they fall immediately via drugs, crime, suicide or something else. For others the bullet may not reach its destination for many years.”

He credited the Diocese of Brooklyn with his willingness to remain with the church because through its Victims Assistance Coordinator, it had demonstrated a “willingness to share my journey” and restoring faith, “where once I knew betrayal.”

That betrayal was compounded when the church treated victims as liabilities, as dishonest, or as seeking money, he said.

“The pain of this ongoing betrayal is not restricted to victims but it’s also experienced by the families of victims, by the larger church community and by priests,” he said.

Torres spoke of the “dissonance” survivors experience when the people who encouraged them to follow the footsteps of Christ failed to follow that example.

“What would Jesus’ response have been in the same situation?” he asked. “Would he have called his lawyers and denounced the victims? Or would he have turned over the tables in a fit of rage and declared that this was intolerable in his father’s house.”

He asked that survivors not be looked as liabilities or adversaries.

“We are your children, we are your brothers, and your sisters, we are your mothers and your fathers. Your words and actions have caused us further harm and pushed us away,” Torres said. “Through silence, distrust and defensiveness, we bear the shame of a crime to which our only contributions were trust, faith and innocence.

“I’m not angry, I’m mostly angry at myself. And I don’t know why. I know you experience a lot of our anger because it’s out there,” he continued. “But I am so sad and disappointed, and think this is what many people feel, victims, laypeople, priests, everyone.”

In a news conference following the survivors’ declarations, Cardinal Daniel N. DiNardo of Galveston-Houston, president of the U.S. Conference of Catholic Bishops, said he couldn’t speak about the reaction of the bishops as a group but offered his personal reaction.

“When you hear someone speak like that, it hits you very hard,” he said, but added that he found it “very moving.”

Bishop Christopher J. Coyne, of Burlington, Vermont, who was with Cardinal DiNardo at the news conference, said what the bishops had heard from survivors in the past was that no one listened to them, so they wanted to “be open and receptive and listen” and not necessarily issue a response but wanted to say “we believe you and we’re listening to you.”

NEXT: Protesters gather outside bishops’ meeting in Baltimore, call for change