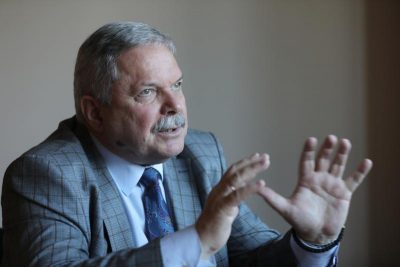 Myroslav Marynovych, a Ukrainian who was jailed for being the founding member of a human rights group, gestures during a Nov. 8 interview with a Catholic News Service reporter in Washington. (CNS photo/Bob Roller)

WASHINGTON (CNS) — Few dissidents who were exiled to gulags, the labor camps run by the Soviet Union, would think of them as pleasant experiences.

But for Myroslav Marynovych, a Ukrainian who was jailed for being the founding member of a human rights group that operated above-ground, it gave him the opportunity of a lifetime.

In the camp, he said, “I became a Christian.” And it was from his becoming a Ukrainian-rite Catholic that he learned the social doctrine of the church that served as the underpinning for much of his life after he was freed.

“It was a change in the system of my world view,” said Marynovych, now the vice rector of Ukrainian Catholic University, a position that lets him lecture without having a PhD.

“I understood the world cannot be imagined without God,” he said. Christian views, Marynovych added, “became a very important basis for the reconstitution of the society.”

He recalled growing up under the notion that “only the Soviet system took care of the simpler worker. Then I read ‘Rerum Novarum,’ the first social encyclical, by Pope Leo XIII. I thought, ‘Wow!'”

The Soviet system also presented each struggle as a win-lose proposition, Marynovych said. But from reading Catholic social teaching, he came to the discovery that “each side needs the other,” adding that the world’s wealthiest countries were “the ones where cooperation between businesses and workers takes place.”

Marynovych acknowledged there is still a way to go in those former Soviet republics, because Soviet-style communism was all they knew.

“That’s the interesting difficulty,” he told Catholic News Service during a Nov. 8 interview. “You may not accept the communistic system philosophically, but it is much easier to change your flag” than to change a political system wholesale.

The church has a place in society, he said, noting a one-time government threat to shut down the church “if it did not do things in a certain way” met with a response from Major Archbishop Sviatoslav Shevchuk that “the church must stand with our flocks.”

Marynovych said ecumenical relations with the church’s Orthodox counterparts in Ukraine are halting at times but filled with goodwill. This is different from past times, when church leaders regarded the other as being part of “a clear zero-sum game,” he added. “There’s no zero-sum language anymore.”

“I’m generally in favor of this new development,” he said, adding that Russian church and civil leaders have painted the Ukrainian Orthodox as “fascistic, radical.” It’s all “propaganda,” he said, “directed at the developments in Ukraine … in order to gain power over Ukraine.”

Such is true, he added, with the ongoing hostilities between Ukraine and Russia, which annexed Ukraine’s Crimea peninsula in 2014.