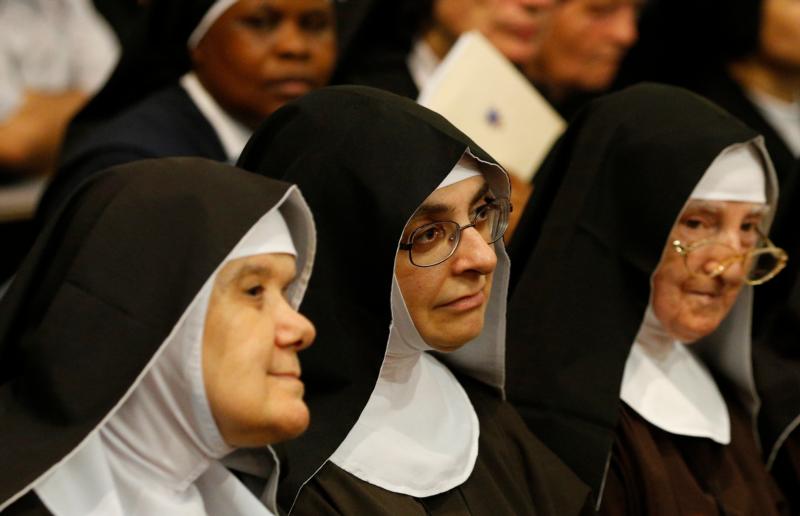 Nuns attend Pope Francis’ meeting with priests, seminarians and religious at the cathedral in Palermo, Sicily, Sept. 15. The pope has asked people to give thanks to God for the gift of so many men and woman living a cloistered life of total dedication to prayer. (CNS photo/Paul Haring)

VATICAN CITY (CNS) — Pope Francis asked people to give thanks to God for the gift of so many men and women living a cloistered life of total dedication to prayer.

“May these communities not lack affection, closeness and support,” including material support, from the entire church, he said, marking World Day of Cloistered Life, Nov. 21, at the end of his general audience in St. Peter’s Square.

The pope also sent a written message the same day, which was also the feast of the Presentation of the Blessed Virgin Mary, to those taking part in a world congress in Rome, organized by the Vatican’s Congregation for Institutes of Consecrated Life and Societies of Apostolic Life.

In his written message, the pope thanked contemplative men and women for their vocation.

Contemplative men and women are like “torches” in the darkness, “sentinels” who proclaim a new day is coming, even though it is still night, he said.

“Thank you, because you enrich us with so many fruits of holiness, mercy and grace,” he said.

The pope also called for careful, well-rounded and in-depth formation, for candidates, formators and leaders.

Formation and spiritual accompaniment are lifelong and permanent for everyone, he said. Instead of being worried about numbers or efficiency, communities should focus on formation that responds to real, current needs and that are “integral” and “personalized.”

“May the Virgin Mary, model of contemplation, teach you to constantly seek the face of God and stay faithful to your mission as the praying heart of the church.”