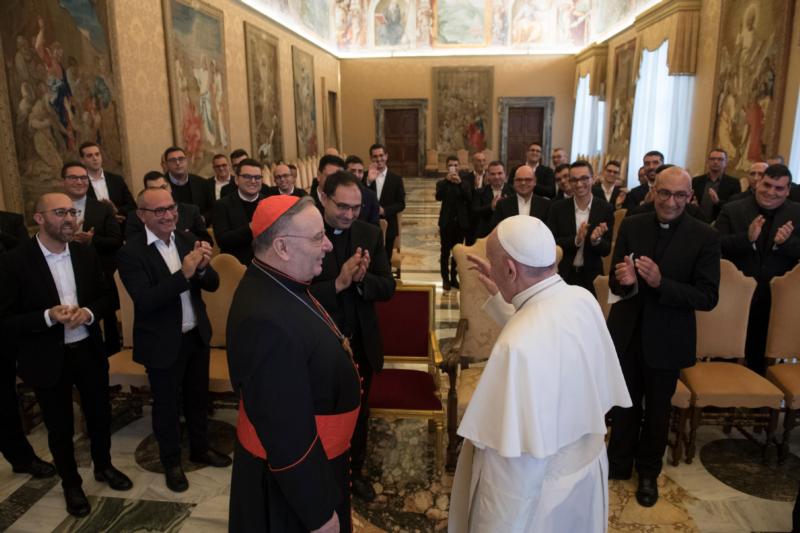 Pope Francis is pictured next to Cardinal Francesco Montenegro of the Diocese of Agrigento, Sicily, during a meeting with diocesan seminarians at the Vatican Nov. 24. (CNS photo/Vatican Media)

VATICAN CITY (CNS) — Priests must always keep in mind that their mission is to serve others and not claim superiority over the people entrusted to their care, Pope Francis said.

Meeting with seminarians from the Sicilian coastal city of Agrigento Nov. 24, the pope and told them that priests must never forget their roots and that God chose them from among their people to serve.

“Clericalism, my dear ones, is our ugliest perversion. The Lord wants you to be shepherds; shepherds of the people, not clerics of the state,” he said.

Choosing to set aside his prepared speech and speak off-the-cuff with the group, the pope said priests are urged by the Holy Spirit to go out in mission and spread the word of God. However, priests must avoid the danger of “going out, not to bring a message, but to ‘go for a walk'” on their own without any direction.

For this reason, he added, priests must be in communion and constant dialogue with their bishops who are there to help them discern the right path.

“The bishop doesn’t just assign a task — ‘take care of this parish’ — as if he were the head of bank that assigns tasks to employees. No, the bishop gives a mission: ‘Go, sanctify those people, bring Christ to those people.’ It is another level,” the pope said.

Bishops should also take the time to know their priests and not act like “the owner of a company” or “a master” but rather a “father who helps them to grow” and prepare them for the mission, he said.

“The more the bishop knows the priest, the less danger there will be of making mistakes in the mission he will give him,” the pope said. “You can’t be a good priest without a filial dialogue with the bishop. This is a non-negotiable thing, as some like to say.”

Although priests from religious congregations have their own distinct spiritualties, Pope Francis said the spirituality of diocesan clergy are based on three relationships, the first of which is the relationship with their bishop.

“One cannot be a good diocesan priest without the relationship with the bishop,” the pope said.

The second relationship, he continued, is their friendship with fellow priests. While not everyone can be close friends, priests can become brothers and respect one another by not engaging in “cowardly” gossip.

“Gossip is the plague of the priesthood. If you have something against someone, say it to their face, say it man to man. But don’t talk behind their back: that is not manly. I’m not saying as a spiritual man; no, as simply a man.”

The third and final relationship priests must care for is the relationship between themselves and the people of God.

Pope Francis said that, like the prophet Amos, who never forgot that he was “taken from behind the flock,” priests must also remember where they came from because “when we forget this, we fall into clericalism.”

NEXT: Pope names organizing committee for abuse conference in February