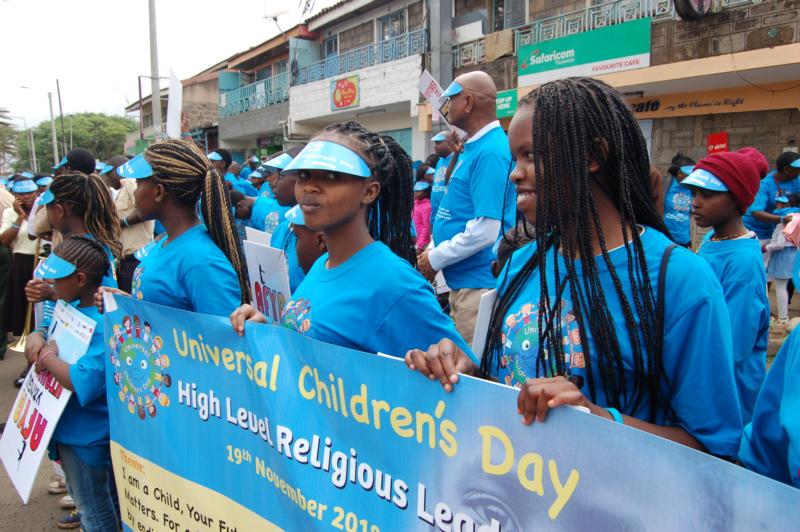 Young women carry a banner as they mark Universal Children’s Day in Nairobi, Kenya. Kenyan bishops have committed to safeguard and protect children from abuses and said the violence and evil directed at minors and vulnerable people were signs of a morally sick society.(CNS photo/Fredrick Nzwili)

NAIROBI, Kenya (CNS) — Kenyan bishops committed to safeguard and protect children from abuses and said the violence and evil directed at the minors and vulnerable people were signs of a morally sick society.

At a Nov. 27 media briefing following their general assembly in Isiolo, the bishops also addressed other issues, including the plight of small-holder farmers, political integrity and ethics, and the fight against corruption.

Archbishop Philip Anyolo of Kisumu said the bishops would do anything possible to implement policies that protect and safeguard children. He said they would require all groups working with minors to commit to the policies.

The bishops said child abuse, child pregnancies and abortions were related, and the increased pregnancy among young girls in Kenya was an indication that children were being sexually abused.

Experts link teen pregnancy to poverty and suggest that girls engage in sex to meet basic needs. Situations such as absentee parents or lack of parental guidance have also been blamed.

“We must tackle this problem at all levels of our society. Children at this age should be guided to focus on learning and getting the necessary education as per talents and their gifts,” said Archbishop Anyolo.

While the bishops want abusers to face the full force of the law, they also urge responsible parenting.

“We are talking about preventing pregnancies among school children, how did they in the first place get pregnant?” said Archbishop Martin Kivuva Musonde of Mombasa. “As children, they are not supposed to engage in some of these acts.”

The archbishop said the church could not accept that the children start using contraceptive to prevent the pregnancies.

“The impact will grave on the children if they get into the habit using the contraceptives. They pose health risks, and some as adults may not be able get (pregnant) in future when they want (children),” said Archbishop Kivuva.

Archbishop Anthony Muheria of Nyeri emphasized: “The church says no to contraception. They (children) are beings, they have an intellect and will. Let us give them the strength and the will to make the right choices. Let us reinforce their humanity, not remove it.”

“It our role as churches to emphasize that even when those morals principles are not followed, they still are fully valid,” he said.

The bishops cite a recent rise in cases of abortion and warn that individual freedoms given by God do not include the destruction of life. They warned Kenyans to be wary of multinational companies and or ads proposing freedom of choice and easy solutions of self-exaltation.

“When we begin to see some lives as useless or unwanted, then we know the society is sick,” the bishops warned in the statement.

NEXT: Woman religious in war-torn Syria focuses on rebuilding, healing