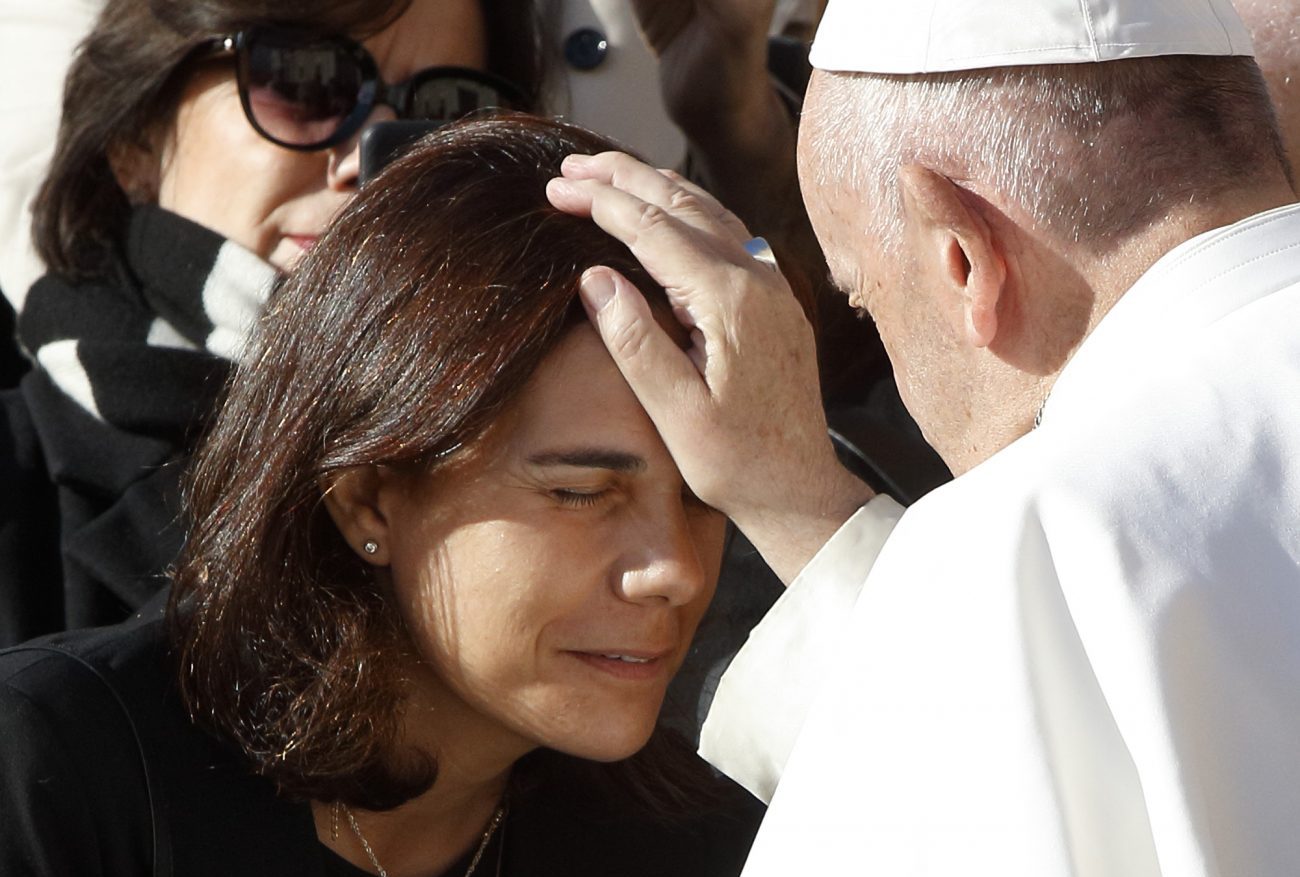 Pope Francis blesses a woman during his general audience in St. Peter's Square at the Vatican Nov. 21. (CNS photo/Anne Condodina)

ATICAN CITY (CNS) — God handed down his commandments not for people to hypocritically follow the letter of the law with a proud and righteous heart, but for people to recognize the truth of their weaknesses and acknowledge their need for help, healing and salvation, Pope Francis said.

“Blessed are those who stop fooling themselves, believing they are able to save themselves from their weakness without God’s mercy,” which is the only thing that can heal a troubled heart, he said Nov. 21 during his weekly general audience in St. Peter’s Square.

“Blessed are those who recognize their evil desires and, with a penitent and humiliated heart, stand before God and humanity, not as one of the righteous, but as a sinner,” he said.

The pope continued his series of talks on the Ten Commandments, reflecting on the final commands, “You shall not covet … your neighbor’s wife” and “anything that belongs to your neighbor.”

The last commandments, he said, encapsulate the essence of all of God’s commands — that every sin or transgression stems from “coveting” and being caught up in evil thoughts and desires.

The commandments aim to set clear limits, which, if they are crossed, do great harm to oneself and to one’s relationship with God and others, the pope said.

But what compels people to cross those boundaries? he asked.

All transgressions and sins, he said, stem from “one common inner root: evil desires.” These desires “stir the heart and one enters the fray and ends up transgressing. But not a formal or legal transgression. A transgression that wounds, wounds oneself, wounds others.”

He said Jesus explains in the Gospel of St. Mark that what is evil comes from what is inside a person, what is in their hearts — evil thoughts like, “unchastity, theft, murder, adultery, greed, malice, deceit, licentiousness, envy, blasphemy, arrogance, folly.”

“Each one of us could ask ourselves which of these desires occurs often in me,” as part of an examination of one’s heart and recognition of the truth, he said.

The Ten Commandments will have no impact or effect if people do not understand the source of sin is inside them and the challenge is to “free the heart from all of these evil and ugly things,” the pope said.

God’s laws could be reduced to just a “beautiful facade of a life that is still the life of a slave and not children” of God, he said.

“Often, behind that pharisaical mask of asphyxiating correctness, something ugly and unresolved is hiding,” he added.

“Instead, we must let ourselves be unmasked by the commandments” in order to reveal one’s spiritual poverty and be led to “a holy humiliation,” recognizing one’s failings and pleading to God for salvation.

The laws of the Bible are not meant to “deceive people that a literal obedience (to the law) brings one to an artificial and, for that matter, unattainable salvation,” he said.

The law is meant to bring people to the truth about themselves — to recognize their poverty and to authentically open themselves up to the mercy of God, “who transforms us and renews us. God is the only one who is able to renew our hearts as long as we open our heart to him. That’s the only condition.”

The commandments help people face “the disarray of our hearts in order to stop living selfishly” and become authentic children of God, redeemed by the Son and taught and guided by the Holy Spirit.

NEXT: Helping others can change the world, pope tells young people