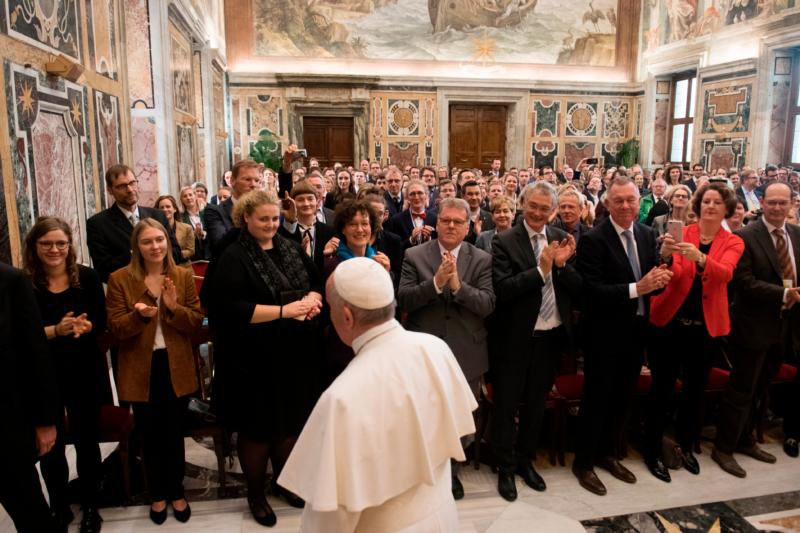 Pope Francis meets with students, alumni and faculty of the Institute for the Promotion of Young Journalists at the Vatican Nov. 9. The Catholic school in Munich, Germany, provides professional training to Christians in the fields of journalism, media and communications. (CNS photo/Vatican Media)

VATICAN CITY (CNS) — Break through every “wall” of gloom and resignation and help the world realize people need to take care of one another because they are all part of one human family, Pope Francis told Catholic journalists.

He also urged them to continue to call out injustices, follow ethical standards and put people first.

The pope spoke Nov. 9 during an audience with some 340 students, alumni and faculty representing the Institute for the Promotion of Young Journalists — a Catholic school of journalism based in Munich. The school was established 50 years ago, after the Second Vatican Council, to provide professional training to Christians in the fields of journalism, media and communications, either for the church or secular outlets.

“As Christian journalists, you stand out for your positive approach toward people and for your professional ethics,” the pope told the group.

The work is more than just a job, he said; it is a responsibility and commitment, especially today when it has become all too easy “to let oneself be carried away by popular opinion, defeatism and a pessimism that paralyzes and blinds.”

“By force of habit, we no longer stand up to evil. We ‘let things be’ or as others have decided they ought to be,” he said, quoting from his apostolic exhortation, “Gaudete et Exsultate” (“Rejoice and Be Glad”), which asserted the need for boldness, passion and inspiration to fight the seduction of complacency.

The pope encouraged the journalists to pray for this frankness and boldness, or “parresia,” from the Holy Spirit who “helps us trust in the truth of Christ that makes us free.”

“Let us get past the wall of sorrow and resignation and let’s help people open their eyes and ears and, above all, their hearts so they can look out for each other and realize they are the sons and daughters of one Father,” he said.

“Thank you, because as journalists you turn your gaze to people, and you call what is injustice an injustice,” he said. “Thank you for also talking about things that are beautiful,” which may not end up on the front page, but still put the human person in the spotlight.

Thanking them for being attentive to the work of the church, Pope Francis said he hoped they would continue to conduct “a journalism of people for people.”