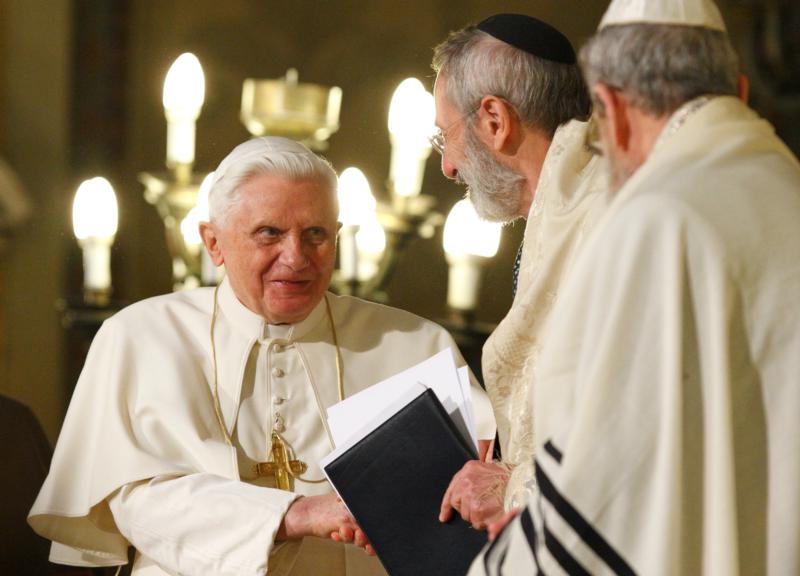 Pope Benedict XVI greets Rabbi Riccardo Di Segni, the chief rabbi of Rome, during his visit to the main synagogue in Rome in this 2010 file photo. The now retired pontiff sent a letter correcting a German theologian who implied that Pope Benedict encouraged the evangelization of the Jewish people as a mission. (CNS photo/Paul Haring)

VATICAN CITY (CNS) — Retired Pope Benedict XVI sent a letter correcting a German theologian who implied that the former pontiff encouraged the evangelization of the Jewish people as a mission.

In a message sent to the German monthly, “Herder Korrespondenz,” Pope Benedict responded to an article in which Michael Bohnke, the theologian, criticized the pope and accused him of advocating proselytism.

Judaism and Christianity are “two ways of interpreting the Scriptures,” the former pope said. The accusation in the article is “grotesque nonsense and has nothing to do with what I said about it. I therefore reject his article as a completely false insinuation.”

According to Vatican News, Bohnke panned a document published in 2015 by the Commission for Religious Relations With the Jews.

The document, which reflected on Catholic-Jewish relations on the 50th anniversary of Vatican II document, ‘Nostra Aetate,’ was later published in the German theological journal “Communio” in 2017.

In it, Pope Benedict said that while there is no specific mission to evangelize Jews, “Christians are nonetheless called to bear witness to their faith in Jesus Christ also to Jews, although they should do so in a humble and sensitive manner.”

Bohnke said the former pope lacked understanding with regard to Judaism while ignoring the suffering inflicted upon Jews by Christians.

However, the pope addressed Bohnke’s criticism, saying that his words did not emphasize a “mission” to convert Jews, but rather dialogue.

Christ’s mandate to his disciples to proclaim the Gospel to all peoples and cultures, Pope Benedict said, “is universal with one exception: a mission to the Jews was not foreseen and not necessary because they alone, among all peoples, knew the ‘unknown God.'”

Christians, he added, are called to dialogue with Jews about Jesus and whether he is the Messiah promised to the people of Israel.

To take up this dialogue once again, Pope Benedict said, is “the duty given us at this time.”

NEXT: In dispute with Catholic leaders, Duterte tells Filipinos to quit church