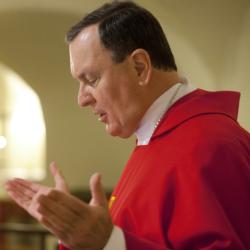 Archbishop Thomas J. Rodi of Mobile, Ala., is pictured in a 2012 photo. (CNS photo/Robert Duncan)

MOBILE, Ala. (CNS) — Saying that Jesus provides light for the church to overcome darkness, Archbishop Thomas J. Rodi of Mobile released the names of priests, deacons and religious brothers who had been credibly accused of sexual misconduct with minors.

In releasing the list Dec. 6, Archbishop Rodi apologized to victims of child sexual abuse as well as to parishioners throughout the southern Alabama archdiocese in a statement posted on the archdiocesan website.

The names were included on two lists: one for archdiocesan clergy and the other for religious order clergy and religious men.

In the case of religious order clergy, he said, the list includes the names of all priests and brothers credibly accused, even if alleged incidents of abuse did not occur in the archdiocese.

The lists show that allegations were received from the 1950s through 2012. The most recent case involved a deacon of the archdiocese. All other incidents were reported no later than 1998.

Archbishop Rodi said the allegations involved about 2 percent of the 457 archdiocesan clergy who have served since 1950. However, church officials were unable to determine how many religious order priests served in the archdiocese during the last seven decades because of incomplete records, he explained.

“I presume the percentage would be similar,” the archbishop’s statement said.

“As you will notice almost all of these acts of misconduct were many years ago. That is in no way to excuse the devastating harm of child abuse. The injury that sexual abuse of a minor inflicts lasts for many years,” the archbishop said.

“At the same time,” he added, “the fact that these horrible acts of misconduct are many years ago, reflects the commitment of the church to protect young people form abuse while they are involved in church ministries.”

The names have been forwarded to the offices of the Alabama attorney general and the Mobile County district attorney, the archbishop said.

“It is my prayer that this (release) will not re-traumatize anyone but will assist in the healing for which victims desperately long,” Archbishop Rodi’s statement said. “I also pray that it will help all the people of the church, and of the broader community, to know that the Archdiocese of Mobile is not allowing anyone to minister in our archdiocese who has credible accusations of sexual misconduct with minors.”

PREVIOUS: Deacon: From wildfires come acts of kindness for those trying to recover

NEXT: Feast of Immaculate Conception does not get weekend dispensation