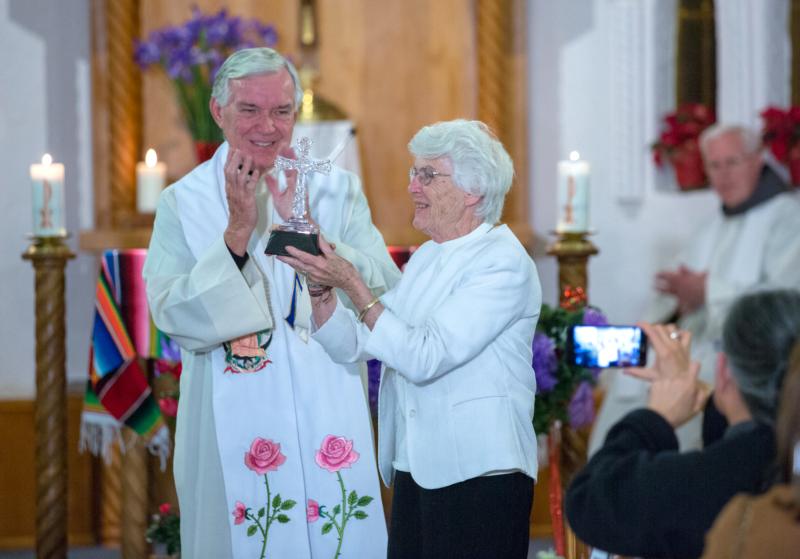 Father Jack Wall, president of Catholic Extension, presents the 2018-2019 Lumen Christi Award to Sister Marie-Paule Willem Dec. 12 at San Jose Mission Church in Las Cruces, N.M., for her lifetime of missionary work. Catholic Extension held a Mass and community celebration in honor of the sister, who is a Franciscan Missionary of Mary. (CNS photo/courtesy Catholic Extension)

The 85-year-old Franciscan Missionary of Mary has been serving the poor in the United States and around the world for more than 60 years.

She is currently in ministry in the Las Cruces Diocese, where she serves women in detention and is pastoral administrator of San Jose Mission, a growing parish community along the U.S.-Mexico border.

The Lumen Christi Award is the highest honor bestowed by the Chicago-based Catholic Extension, a national organization that raises and distributes funds to support U.S. mission dioceses, many of which are rural, cover a large geographic area, and have limited personnel and pastoral resources.

The recipient is chosen for best demonstrating “how the power of faith can transform lives and communities.”

During the community-wide Mass and celebration at San Jose, Father Jack Wall, president of Catholic Extension, commented during the homily how moving it was to be with Sister Willem and her parishioners.

“Sister Marie-Paule embodies the very meaning of light of Christ, and through her inspiration you can see that same light in her Church followers. She also teaches us that war, persecution and suffering cannot extinguish the light of Christ.”

Nominated by her bishop, Sister Willem was one of 47 nominees this year and one of eight finalists. As the Lumen Christi recipient, Sister Willem and the Las Cruces Diocese will share in a $50,000 grant.

Growing up in Belgium, Sister Willem survived Nazi occupation. She was also expelled from South America while advocating for social justice amid a brutal regime.

Sister Willem, who speaks five languages, arrived in the Rio Grande Valley in 1980 to minister in the border town of Roma, Texas, which is in the Brownsville Diocese. She became the director of religious education for the Our Lady of Refuge Parish and worked with incarcerated women at a detention center.

She then moved to the Diocese of Las Cruces to serve migrant farmworkers and immigrants. Five years ago, she became pastoral administrator at San Jose Mission Church in Dona Ana County. When she arrived, the parish only had a handful of parishioners and no full-time pastor. She started building up the church and the community. Today, the parish has more than 200 active families.

“What an honor it is to receive the Lumen Christi Award,” said Sister Willem. “And I want to accept it on behalf of our community because that’s what it really is, an award for our community. These funds will help us with needed improvements to our parish.”