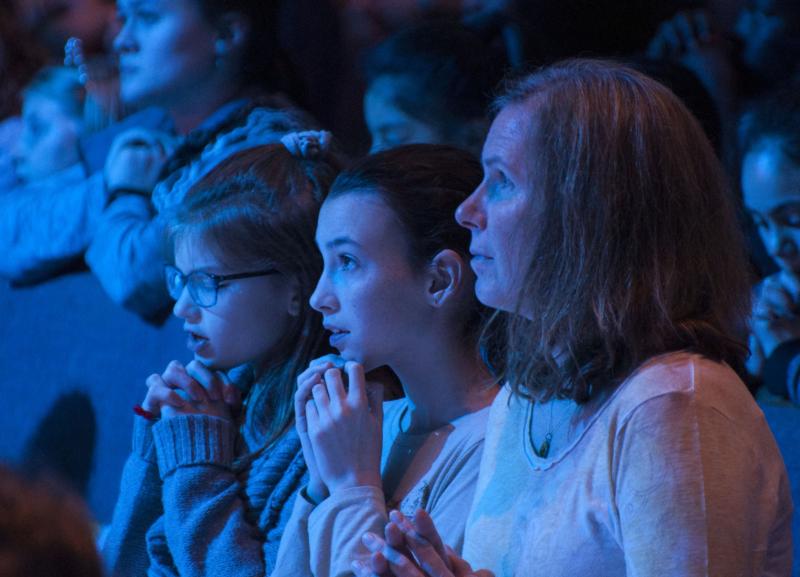 Attendees are seen at a Mass for about 1,800 middle school students and their chaperones at the Holy Fire retreat event Dec. 1 at the Catholic Pastoral Center in Nashville. (CNS photo/Theresa Laurence, Tennessee Register)

NASHVILLE, Tenn. (CNS) — More than 1,800 Catholic middle school students and their chaperones from 10 dioceses danced and prayed their way through an interactive retreat event at the Catholic Pastoral Center in Nashville, the largest of its kind ever staged in the diocese.

“I’m still in awe,” said Bill Staley, director of youth and young adult ministry for the Diocese of Nashville.

The daylong event Dec. 1, which included a mix of high-energy musicians and inspirational speakers, along with quiet moments for eucharistic adoration and prayer, was well-received by the youth, their parents and chaperones who attended.

Holy Fire, produced by the National Federation for Catholic Youth Ministry, is developed in collaboration with host dioceses, like Nashville as well as Chicago recently. Both events have been extremely well attended by thousands of young people.

“We had over 10 dioceses in all, including representatives from across Tennessee and three of four dioceses in Kentucky,” Staley told the Tennessee Register, newspaper of the Nashville Diocese. Groups also traveled from Birmingham, Alabama, north Georgia and Evansville, Indiana.

“I feel really good to grow this event into something great,” said Staley, who is already thinking about hosting a two-day event next year.

“It was a great experience and we can’t wait to go back next year,” said Cindy Sabatino, director of religious education at Our Lady of the Lake Church in Hendersonville, Tennessee, who brought a group of 30 sixth-, seventh- and eighth-graders to the event.

One of the high points of the day for Sabatino and her group was adoration. “Many of them had never experienced adoration like that” among such a large group of peers, she said. “They can be intimidated to pray in front of their peers,” she said, but here they were encouraged to let their guard down and “just be with the Lord” in the moment.

The entire experience of being with so many Catholic young people for a full day of Catholic musicians, speakers and prayer was new to many Holy Fire participants, young people and their parents alike, Staley said.

“Many parents joined for the whole day,” he said. “A lot of them didn’t have an experience like this (in their own childhood), which is a wonderful benefit of the program.”

Holy Fire is the newest evolutionary step in the Diocese of Nashville’s annual confirmation preparation for middle schoolers, and now reaches beyond the students preparing for the sacrament.

Partnering with the National Federation for Catholic Youth Ministry enabled Nashville’s youth ministers to stage a much larger-scale event than they could have done alone, complete with professional sound and lighting designs, big screen video and multimedia presentations.

Holy Fire’s mission is “to set young people ablaze with the love of Christ and inspire them to live as disciples of Jesus Christ in the world, to embrace their baptism and engage with the relevant and powerful Gospel of Jesus.”

Speakers and performers from the day included: Joe Melendrez, Noelle Garcia, Dom Quaglia, Sarah Hart, the Cimorelli Sisters and the Sarah Kroger Band. Throughout the day, participants also had the opportunity to receive the sacrament of reconciliation, renew their baptismal promises, and talk with exhibitors, which included the Dominican Sisters of St. Cecilia, among others.

Nashville Bishop J. Mark Spalding, who drove back to Nashville from Cincinnati just in time to make the closing remarks at the Holy Fire Mass, encouraged the young people to be examples pointing towards Christ, “to bring the love of Christ into your home and community.”

“I think the bishop’s message was very meaningful,” said Sabatino, encouraging the youth to go forth and have a positive influence. “He’s young, he’s motivated, he inspires the kids.”

Overall, Sabatino said, her group wasn’t sure what to expect going into the day, but thoroughly enjoyed the experience. Holy Fire “put them in a place where they could open their hearts to Jesus,” she said.

Laurence is a staff writer for the Tennessee Register, newspaper of the Diocese of Nashville.

PREVIOUS: Immigration battles continue as 2018 comes to an end