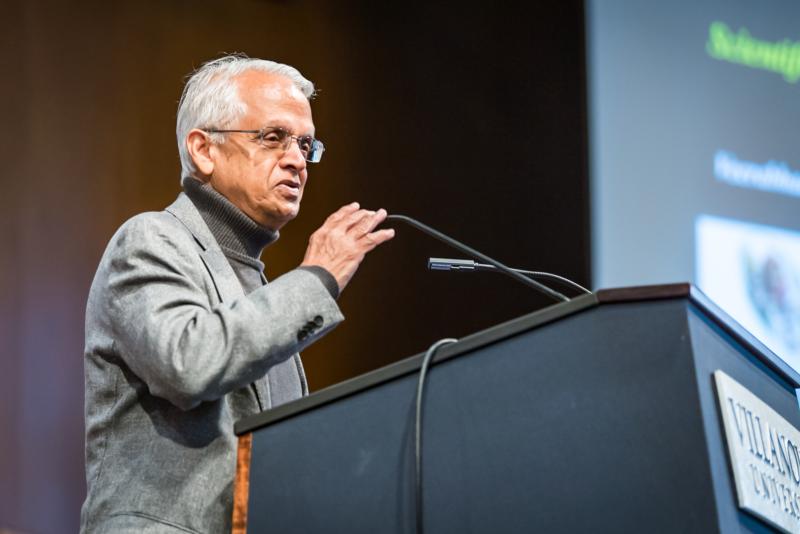 PHILADELPHIA (CNS) — An internationally renowned pioneer in climate science and climate change research, in an address at Villanova University, said that rather than “finger-pointing” about the causes of global warming, people need take collective action to slow the process.

If not addressed, global warming will lead to stronger and larger storms and wildfires, said Veerabhadran “Ram” Ramanathan.

The recipient of Villanova University’s 2018 Mendel Medal, he recently addressed an audience of more than 600 people at the university about the dangers of climate change and its impacts for the future.

— How much time do we have before climate change becomes unmanageable?

— How much time do we have to bend the curve and steer climate away from unmanageable levels?

— What are the solution sets still available to us?

— What can people do to contribute to the solution?

First awarded in 1929, Villanova’s Mendel Medal honors 19th-century Augustinian friar and scientist Gregor Johann Mendel, best known as “the father of modern genetics” for his discovery of the laws of heredity that bear his name.

Ramanathan is professor of climate and atmospheric sciences at the Scripps Institution of Oceanography at the University of California, San Diego. He has a doctorate in planetary atmospheres from the State University of New York at Stony Brook.

In awarding him the Mendel Medal, Villanova recognized Ramanathan’s research accomplishments: his discovery of the greenhouse effect of halocarbons, particularly chlorofluorocarbons (CFCs) previously used in aerosol products; his prediction in 1980 that global warming would be detected by the year 2000; his work with NASA’s climate satellite during the 1980s to identify and quantify how the radiation field interacts with water vapor and clouds to regulate climate change; and his ongoing scientific search for solutions to the growing consequences of global warming.

“We are in a dangerous to catastrophic stage that will then morph into an existential threat for all of us,” Ramanathan told the audience. “There is still time to make change, but it is going to require cooperation and not finger pointing.”

Ramanathan’s recent finding — that mitigation of short-lived climate pollutants will slow down global warming during this century — resulted in a proposal adopted by the United Nations and 30 countries, including the United States, to form the Climate and Clean Air Coalition.

The climate scientist noted that since 1750, human activity has added 2 trillion tons of carbon dioxide into the atmosphere. To put it into perspective, he said that output is equivalent to 450 billion cars circling the planet.

“Everything we know is based on data,” Ramanathan said about the statistics. “The proof is there and cannot be theorized. If we can see how it’s happening, how can we call it a hoax?”

Ramanathan has published widely in scientific journals and has led three major studies to develop comprehensive solutions to the climate change problem. He is working with the Vatican to form an alliance between science, policy and religion that would result in concrete action to protect both people and the environment.

Speaking about global warming and the impacts of drought, storms and flooding, Ramanathan said that in the 1970s, ice in the Arctic reflected 38 percent of the sun’s light. By the turn of the century, it had decreased to 32 percent. The earth, he continued, is absorbing more light and heat at an unprecedented rate.

If the trend continues, the world would expect to experience a 1.5 degrees Celsius increase in temperature by 2030, and a full two degrees increase by 2050.

“We need to do something to stop it by 2030,” Ramanathan said. “Droughts will be devastating. Mother Nature is giving us an early warning.”

Concluding his speech, Ramanathan urged the audience to take steps to slow down the warming process which, if not addressed, will ultimately lead to stronger and larger hurricanes and wildfires. “Action will make a huge, huge impact,” he said.

“Without exaggeration, Dr. Ramanathan is a prophet in the tradition of the prophets of the Bible,” said Augustinian Father Kail Ellis. “He represents Pope Francis’ emphasis on the need for ‘a new and universal solidarity’ by raising awareness of this crisis in his scientific research. It is a needed and crucial message.”

The Mendel Medal, which celebrated its 90th anniversary this year, is given to outstanding contemporary scientists in recognition of their accomplishments. Past recipients have included Nobel laureates, outstanding medical researchers, pioneers in physics, astrophysics and chemistry, and noted scientist-theologians.

Chizar writes for CatholicPhilly.com, the news outlet of the Archdiocese of Philadelphia.

PREVIOUS: Ethicist: Gene-editing human embryos ‘a train wreck of a thing to do’

NEXT: L.A. archdiocese won’t press charges against nuns for ‘misappropriation’