Woman who once assisted with abortions to address March for Life Jan. 18 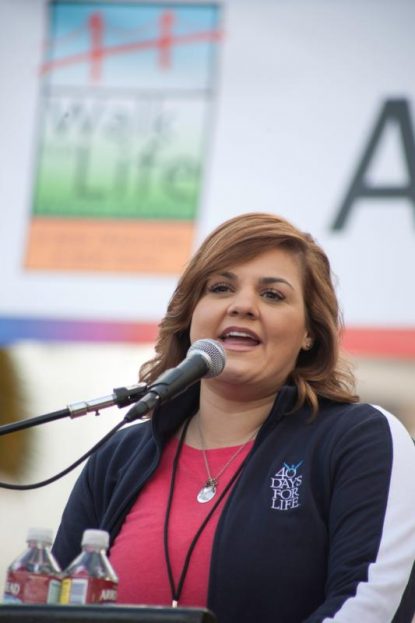 Abby Johnson, who early in her career assisted in carrying out abortions, will be among the speakers during the 2019 March for Life rally Jan. 18 on the National Mall in Washington. She is pictured in a 2011 photo. (CNS photo/Jose Luis Aguirre, Catholic San Francisco)

WASHINGTON (CNS) — Abby Johnson, who early in her career assisted in carrying out abortions, will be among the speakers during the 2019 March for Life rally Jan. 18 on the National Mall in Washington.

Johnson, a one-time Planned Parenthood clinic director, is the founder of And Then There Were None, a ministry that assists abortion clinic workers who have left their position.

“Unique From Day One: Pro-Life Is Pro-Science” is the theme of the 2019 march, Jeanne Mancini, March for Life president, said during a media briefing Dec. 5 in Washington.

Mancini said this year’s events will focus on the scientific discoveries that have led to new understanding about life in the womb.

“Science and technology are on the side of life in large because they show the humanity of the child at a very young age,” Mancini told Catholic News Service after the briefing.

“We can hear and see a baby’s heartbeat now at six weeks. There are blood tests to know a baby’s gender at seven weeks. Now that’s changed enormously over the course of the last few years,” she said.

The 2019 march follows encouraging news for the pro-life movement that abortions overall as well as the country’s abortion rate continued to decline in 2015, according to data compiled by the federal Centers for Disease Control and Prevention.

Two days of events open with the annual March for Life conference and expo Jan. 17. A panel discussion during the conference will include Dr. Grazie Christie, a policy adviser for the Catholic Association; Dr. David Prentice, vice president and research director of the Charlotte Lozier Institute; Rick Smith, founder of Hope Story, a nonprofit organization that helps families with a Down Syndrome child; and Christine Accurso, executive director of Pro Women’s Healthcare Centers.

In addition, popular commentator Ben Shapiro planned to bring his podcast to the march for live recording at 10 a.m. (EST) Jan. 18.

The main event, the March for Life Rally, is set for noon at 12th Street NW on the National Mall between Madison Drive and Jefferson Drive. Afterward, participants will gather for the official march on Constitution Avenue between 12th and 14th streets and make their way to the U.S. Supreme Court.

The annual Rose Dinner closes the observance the evening after the march.

Details of events are online here.