Bishops: Ukrainians have ‘sacred duty’ to defend against Russian forces 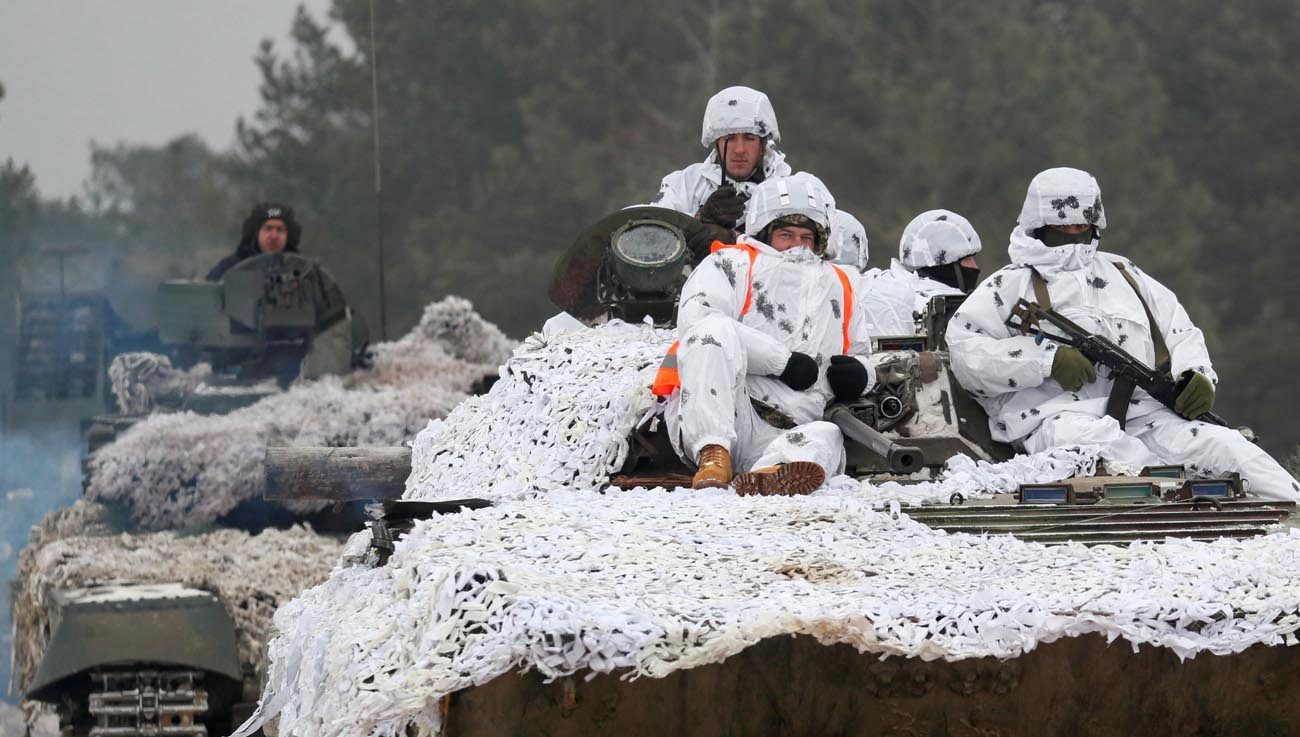 Ukrainian soldiers ride atop armored vehicles during military exercises Dec. 3 in the Ukrainian ground forces training center near Honcharivske. Ukrainian Catholic bishops said Ukrainians had a "right and sacred duty" to defend themselves against "Russian aggression," but should also avoid yielding to alarm and panic. (CNS photo/Valentyn Ogirenko Shevchuk, Reuters)

KIEV, Ukraine (CNS) — In a message marking the anniversary of their country’s December 1991 referendum on independence from the Soviet Union, Ukrainian Catholic bishops said Ukrainians had a “right and sacred duty” to defend themselves against “Russian aggression,” but should also avoid yielding to alarm and panic.

“On the eve of our homeland’s Christmas season, another heavy test has fallen on us — an open show of aggression by the Russian Federation, which has deployed large military forces on our country’s borders by land and sea, attacking our ships, and wounding and capturing dozens of Ukrainian military seamen,” said the Dec. 1 message, signed by Ukrainian Catholic Major Archbishop Sviatoslav Shevchuk.

“Whatever the external manifestations of these latest aggressive actions against our state and people, it should be remembered such actions have spiritual roots in the hearts of criminals and aggressors captured by evil forces.”

The bishops said Russian actions had been condemned by the international community and countered by the Ukrainian government’s imposition of martial law in 10 regions.

However, they added that “the key to ultimate victory by people and state over the forces of darkness and evil” would come with “the spirit of sacrificial love for homeland and civil solidarity.”

“We urge all citizens of Ukraine to understand the new restrictions and not succumb to a state of alarm from those trying to sow panic in our hearts and feelings of despair,” the message said.

“The current Russian attack has shown the danger to our state’s independence and territorial integrity, far from receding, has sometimes even intensified. Although the state has made great and tangible progress in reforming the Ukrainian army, our military still needs and will always need the greatest gift we can give them — our solidarity, prayer and fasting.”

In a Nov. 30 interview with Poland’s Catholic Information Agency, KAI, Archbishop Shevchuk said he and other bishops were still trying to understand what martial law would signify.

However, he added that government officials had assured them there would be “no great dramatic changes” or “restrictions on civic rights and freedoms,” and said he hoped current “apocalyptic visions” would “end in benefits to the nation and Ukrainian state.”

In their message, the bishops called on church members to pray for “victory over the external aggressor’s machinations, and for peace.”

“We urge Ukrainian politicians not to speculate on this difficult stage in our state’s creation or abuse its people’s misfortune for shortsighted political gains, but consolidate, protect and build our state’s independence,” the message said.

“We also appeal to the international community to make effective efforts for the release of all our prisoners, including those who are in need of support, solidarity and prayer.”

NEXT: Pope expresses condolences for death of former President Bush