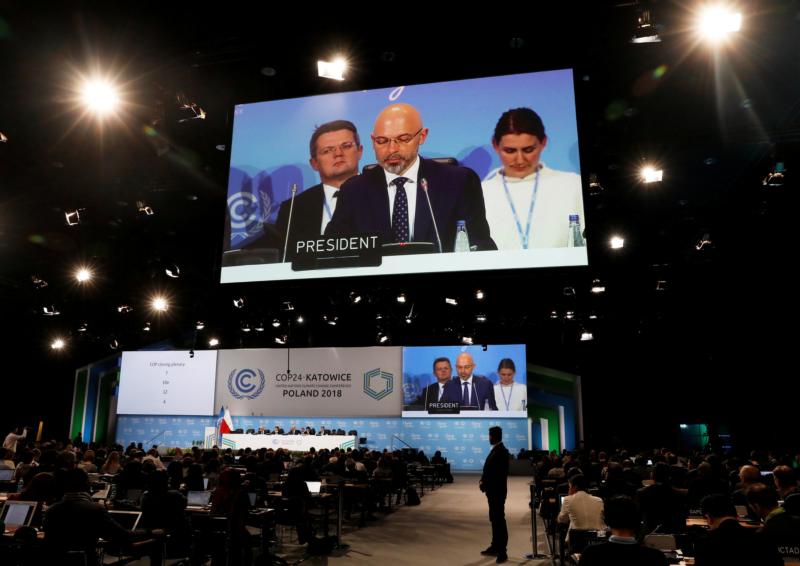 UPDATED – WARSAW, Poland (CNS) — Catholic participants and observers criticized a “lack of ambition” by government negotiators at a U.N. conference on climate change that ended Dec. 15 with agreement on a rulebook to implement the 2015 Paris climate accord.

The final document that emerged from the 24th U.N. Conference of Parties, or COP24, in Katowice, Poland, outlines a careful balance among the needs and concerns of the most developed nations, emerging nations and poor countries whose inhabitants already are experiencing the effects of climate change.

“Many people expected a complete derailment of this conference, so the fact that countries were able to agree on a rulebook shows there’s still some spirit of commitment,” Rebecca Elliott, communications director at the Global Catholic Climate Movement, told Catholic News Service Dec. 17.

“But they should have gone further,” she added. “The church has always stressed the importance of solidarity, and this is what we’ll be working towards in future — for new ambitions to be placed on the table, and new signs that countries are committed to protecting vulnerable people around the world.”

An estimated 23,000 people, including a delegation from the Holy See, participated in the conference.

The Vatican delegation, led by Cardinal Pietro Parolin, Vatican secretary of state, agreed that “the rulebook does not adequately reflect the urgency necessary to tackle climate change, which represents one of the principal challenges facing humanity in our day.”

“Moreover, the rulebook seems to downplay human rights, critical in reflecting the human face of climate change, which affects the most vulnerable people on earth. Their cry and that of the earth demand more ambition and greater urgency,” said the delegation’s final statement, which was released by the Vatican Dec. 19.

While grateful that leaders and other stakeholders confirmed their commitments and found consensus on the rulebook, the Vatican said it saw how participants “struggled to find the will to set aside their short-term economic and political interests and work for the common good.”

Elliott noted that Catholic representatives, including the Vatican contingent, had “brought a moral imperative to the conversation” on the need to respond to the challenges global warming already poses to people in the world’s poorest countries. It was a perspective that rulebook negotiators discussed widely during talks that extended well into the night of Dec. 15, more than a day after the conference was to end.

However, CIDSE added that the lack of “solid financial commitments” and “strong mechanisms for reducing greenhouse gas emissions” in the rulebook showed governments were still failing to “reflect the urgency” and were “shying away from their responsibility to act.”

“We are in a time of climate emergency — to save our planet, we will need to make drastic changes in our policies and lifestyles,” the organization said in a statement Dec. 16.

“People asked governments to put transformative actions in place at this COP. While nobody expected one conference to solve the climate crisis by itself, we did expect better than this — and we deserve better,” the statement said.

The rulebook sets out how governments will measure, report and verify their emissions-cutting efforts under the Paris agreement, which comes into force in 2020, but falls short of what scientists have said is needed to rein in climate change.

Martin Krenn, policy officer with the Austrian Catholic Church’s International Development and Mission office, described the outcome in a Dec. 15 television interview as a “bitter disappointment” for not including human rights, food security and “gender justice.” He said a “comprehensive transformation of consumption patterns and production systems” was still needed to support climate-vulnerable developing countries.

Meanwhile, the chairman of the German bishops’ Social Affairs Commission, Bishop Franz-Josef Overbeck of Essen, warned that climate problems could not be solved “solely through new technologies,” but also needed a “change of lifestyles.”

“It’s very regrettable the results of climate science research are still not accepted by all,” he said. “We cannot afford to doubt the findings of the overwhelming majority of climatologists and postpone the consequences till the day of judgment.”

In its statement, CIDSE said Catholic campaigners had joined other civil groups in a “huge protest” on the final day of COP24, demanding “immediate and ambitious action” to ensure “the burden does not once again fall on the poor and those who are most affected by — but least responsible for — the climate crisis.”

It added that the commitment of Catholics would “contribute to the awakening they create all around them, through the power of their actions and their witness.”

“Climate justice is a moral imperative and solidarity cannot exist without humility; politicians of wealthy nations should be humble enough to recognize their duty to put the interests of others first, to understand that we share one common home,” CIDSE said.

Elliott said church-linked organizations would continue following intergovernmental discussions closely and would “not forget” the U.N.’s target of reducing carbon emissions by around half over the next 12 years.

“This conference has shown cooperation for the common good is still possible, and that’s what people around the world are looking for,” Elliott said.

“The church is offering moral leadership on a very big scale and (is) waking up a moral voice in all countries. With cardinals and bishops around the world, the pope has spoken very strongly on climate change as something integral to the practice of our faith. This is something we can expect to continue.”