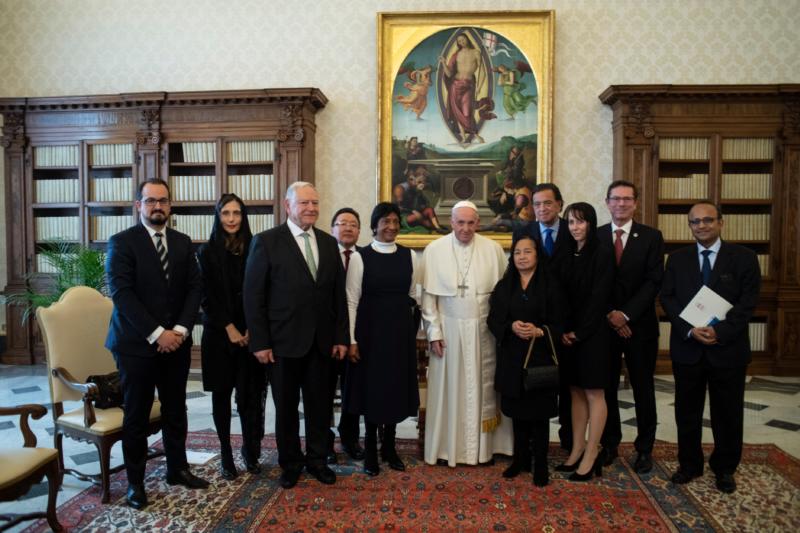 Pope Francis meets with a delegation from the International Commission Against the Death Penalty in the papal library of the apostolic palace Dec. 17. (CNS photo/Vatican Media)

VATICAN CITY (CNS) — The death penalty is an inhumane form of punishment that ignores the primacy of mercy in the name of justice, Pope Francis said.

Meeting a delegation from the International Commission against the Death Penalty Dec. 17, the pope set aside his prepared remarks and spoke off the cuff, the Vatican said.

In his prepared text, which was handed to the delegation, the pope said his recent revision of the Catechism of the Catholic Church’s teaching against capital punishment was an important step in recognizing that the death penalty was “a consequence of a mentality of the time — more legalistic than Christian — that sanctified the value of laws lacking in humanity and mercy.”

“The church could not remain in a neutral position in the face of today’s demands to reaffirm personal dignity,” the pope said.

Pope Francis ordered a revision of the catechism’s paragraph on capital punishment, 2267, in August to assert that “the death penalty is inadmissible because it is an attack on the inviolability and dignity of the person” and to commit the church to working toward its abolition worldwide.

The development of the church’s teaching, he said, is consistent with “defending the dignity of human life” and is a step that all countries should follow.

“As has happened in the heart of the church, a similar commitment must be made by all nations,” the pope said. “The sovereign right of all countries to define their legal system cannot be exercised in contradiction with their obligations under international law, nor can it represent an obstacle to the universal recognition of human dignity.”

Countries that have not abolished capital punishment but have adopted a moratorium on executions also should ban the death penalty as a possible punishment for crime, Pope Francis said.

A temporary moratorium, he said, “cannot be lived by the condemned person as a mere prolongation of the waiting period for his or her execution.”

He also implored countries that continue executing prisoners to adopt a moratorium with the goal of abolishing “this cruel form of punishment.”

“The suspension of executions and the reduction of offences punishable by death as well as the prohibition of this form of punishment for minors, pregnant women or persons with mental or intellectual disabilities, are minimal targets to which leaders around the world should commit themselves,” he said.

He also called for an end to the “unfortunately recurrent phenomenon” of extrajudicial executions, which occur both in countries with and without capital punishment. All lethal use of force that is not strictly used to defend one’s self or another person, the pope said, “can only be regarded as an illegal execution, a crime of the state.”

Pope Francis called for “a truly humane justice” that protects the rights and safety of people while based on an “ethic of care.”

In this way, the pope said, “it is possible to address the ethical and moral problems that derive from conflict and social injustice, to understand the suffering of the concrete people involved and to arrive at other types of solutions that do not deepen these sufferings.”