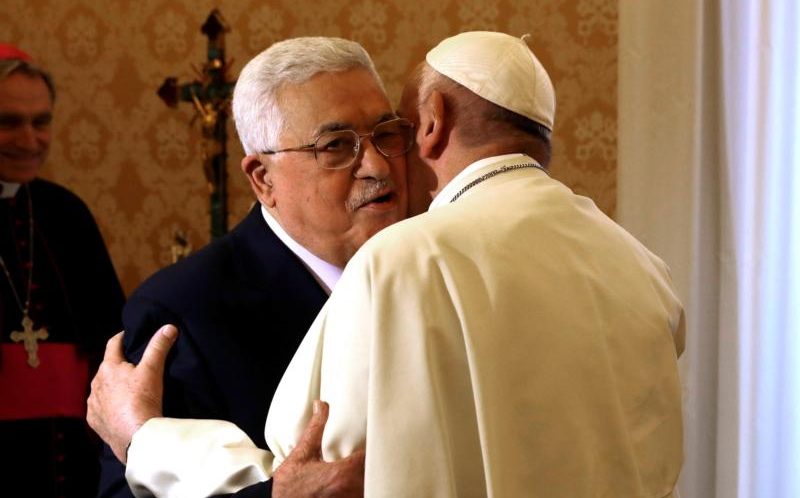 VATICAN CITY (CNS) — Pope Francis and Palestinian President Mahmoud Abbas renewed their commitment to peace in the Holy Land and a two-state solution to resolve the conflict between Israel and Palestine, the Vatican said.

The pope welcomed President Abbas to the Vatican Dec. 3 and the two spoke privately for 20 minutes.

In a statement released after their meeting, the Vatican said the two leaders focused on “efforts to reactivate the peace process between Israelis and Palestinians, and to reach a two-state solution, hoping for a renewed commitment on the part of the international community to meet the legitimate aspirations of both peoples.”

Pope Francis and Abbas also discussed the status of Jerusalem and underlined “the importance of recognizing and preserving its identity and the universal value of the holy city for the three Abrahamic religions.”

Tensions over the city rose again in December 2017 after President Donald Trump announced his decision to move the U.S. embassy to Jerusalem from Tel Aviv, fulfilling a promise he made during his presidential campaign.

The announcement sparked anti-U.S. protests throughout Asia and the Middle East and drew warnings from Middle Eastern and European leaders that overturning the United States’ long-standing policy would further complicate peace negotiations.

He also gave the pope a book titled, “Two Lands of Holiness,” a historical book about the Holy Land and Vatican City as well as hand-carved wooden panel.

The pope gave the president a commemorative medallion depicting St. Peter’s Basilica in the 1600s and a copy of his 2018 message for the World Day of Peace.

“It is from this year and I signed it with today’s date,” the pope said as he gave him the message.

Taking his leave, Abbas warmly embraced the pope, who thanked the Palestinian president for visiting.

“I am happy about this meeting,” Abbas replied. “We are counting on you.”

PREVIOUS: If gay priests, religious can’t be celibate, they should leave, pope says