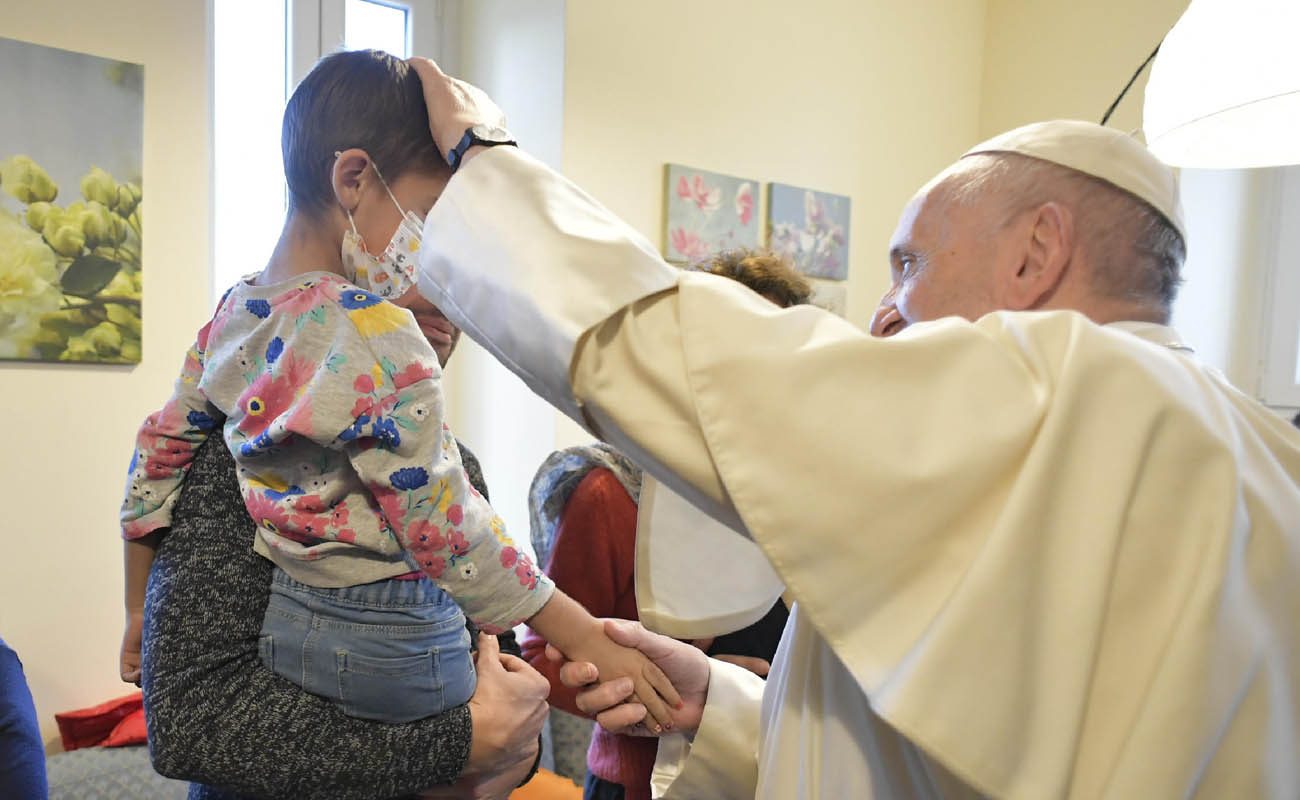 Pope Francis greets a sick child as he visits poor, sick people at a center run by the CasAmica Onlus organization on the outskirts of Rome Dec. 7. The visit continued the pope's tradition of doing Friday works of mercy. (CNS photo/Vatican Media)

ROME (CNS) — Pope Francis made surprise visits Dec. 7 and 8 to people receiving medical care far from their homes, to a dozen intellectually challenged young people and to the staff of a major Rome newspaper.

The late-afternoon visits Dec. 7 to the CasAmica residence for families with a member needing long-term medical care far from home and to Il Ponte e l’Albero, a therapeutic rehabilitation home, were part of the pope’s continuing “Mercy Friday” activities.

Pope Francis began the Friday visits to hospitals, clinics, schools and residential communities during the 2015-16 Year of Mercy to demonstrate that mercy involves concrete acts of kindness and solidarity.

Both the CasAmica and Il Ponte e l’Albero are on the extreme southern edge of Rome.

The Vatican said most of the guests at the CasAmica are Italian families, mostly from the south, who cannot afford to stay in a hotel or rent an apartment while their family members are receiving treatment for cancer, leukemia or other serious illnesses. A few of the families, though, come from North Africa and from Eastern Europe.

“The pope rang the doorbell and was welcomed by the personnel on duty, who were dumbstruck at the unexpected visit,” the Vatican said. Some of the guests were in the kitchen and some children were in the playroom. “The Holy Father stopped to play and joke with them” before listening to the parents of some sick children and offering them words of comfort.

The visit to Il Ponte e l’Albero came in response to a letter from some of the young people describing “the daily difficulties that come from their mental disadvantages,” as well as their desire and efforts to follow the programs their doctors have designed for them.

According to a Vatican statement, the pope sat with the young people, listened to them, responded to their questions and encouraged them. The parents of some of the young people heard the pope was there and arrived in time to embrace him and thank him for the visit.

His visit to the newspaper, Il Messaggero, Dec. 8 also came in response to an invitation. The newspaper is marking its 140th anniversary.

Pope Francis stopped at the newspaper’s headquarters in the center of Rome just after leading prayers for the feast of the Immaculate Conception.

In a video of the visit, posted by the newspaper, Pope Francis confirmed Il Messaggero is his preferred daily paper, even though, he said, “I’ve been advised against” reading it by some people.

Pope Francis said journalism should be a service, “explaining things without exaggeration, always looking for the concrete.”

Discover the facts, report them and then comment on them, he said. “This is the kind of information we all need.”