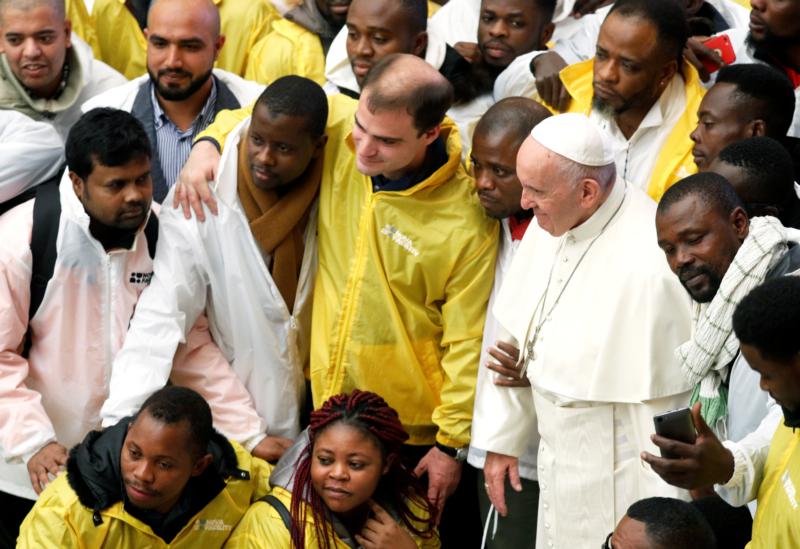 Pope Francis poses with a group of migrants during his general audience Nov. 28 in Paul VI hall at the Vatican. (CNS photo/Max Rossi, Reuters)

VATICAN CITY (CNS) — Welcoming the finalization of global compacts on migration and on refugees, the Vatican urged nations to adopt the nonbinding agreements to protect people who are on the move and to promote their orderly acceptance in new countries.

“Greater cooperation and responsibility sharing are important themes running through both compacts,” said a statement Dec. 6 from the Vatican’s Migration and Refugees Section.

In anticipation of the adoption Dec. 10-11 of the Global Compact for Safe, Orderly and Regular Migration, the Vatican noted, however, that it had registered some “reservations and comments” on references in the compact to “the so-­called ‘Minimum Initial Service Package,'” which includes the distribution of condoms, and to “sexual and reproductive health services,” which could include abortion.

Those provisions, the Vatican said, “are neither agreed language in the international community nor in line with Catholic principles.”

Still, the Vatican said, the compact is an essential recognition that the phenomenon of migration is universal and that international cooperation is required to protect the rights and dignity of migrants and to assist the nations that welcome them.

The global compact offers “a menu or a toolkit of actions that states — and other actors — can choose to do internally, bilaterally and even regionally, depending on their circumstances and needs,” the Vatican statement said.

In developing the compacts, it noted, “The Holy See has been involved from the start, applying Pope Francis’ approach as simply and eloquently expressed in four actions: welcome, protect, promote and integrate, all of which are founded on the Gospel call to care for the stranger.”

While not a treaty or obligatory set of actions, the compact on migration “expresses many universal values as objectives ­­ for example, to save lives, prevent smuggling and trafficking, provide accurate information, facilitate fair recruitment, reduce vulnerabilities in migration, manage borders well and invest in skills development,” the Vatican said.

Even in countries, like the United States, that pulled out of discussions about the compacts and in countries that do not adopt them, the Vatican said, the Catholic Church will continue “welcoming, protecting, promoting and integrating vulnerable people on the move, as well as nourishing them spiritually.”

In a statement Dec. 7, Jesuit Father Thomas H. Smolich, director of Jesuit Refugee Service, said his organization “regrets” that some countries have withdrawn from the compact discussions and will not sign them.

“It is evident to all observers that migration is a truly global phenomenon, closely interconnected with situations of inequality in the world,” he said. “Global migration brings global challenges, and requires global responses. The process that led to the migration and refugee compacts was an unprecedented attempt to look for solutions in a globally coordinated way.”

In addition, he said, people should be aware that “the compacts are nonbinding instruments that in no way compromise national sovereignty or the rights of states to manage, and make legal distinction between, regular and irregular migration.”

“Both compacts also recognize the need, often ignored in the past, for host countries and communities to be supported and protected,” Father Smolich said

But, he said, “at the heart of both compacts is the principle of solidarity: the responsibility for protecting refugees and vulnerable migrants has to be shared by everyone.”

In his statement, he said that JRS “acknowledges the concerns of countries that cite ‘national security’ as a reason to exclude or penalize refugees. However, states must remember that security is not about securing borders, but about providing for the security of all people. Fundamental human rights must also always be taken into account when considering security mechanisms and policies.”

“We call on the global community to accompany all vulnerable people on the move, to provide for their basic needs, and to cooperate in the privileged task of giving them hope, starting by unanimously approving both global compacts,” Father Smolich said.