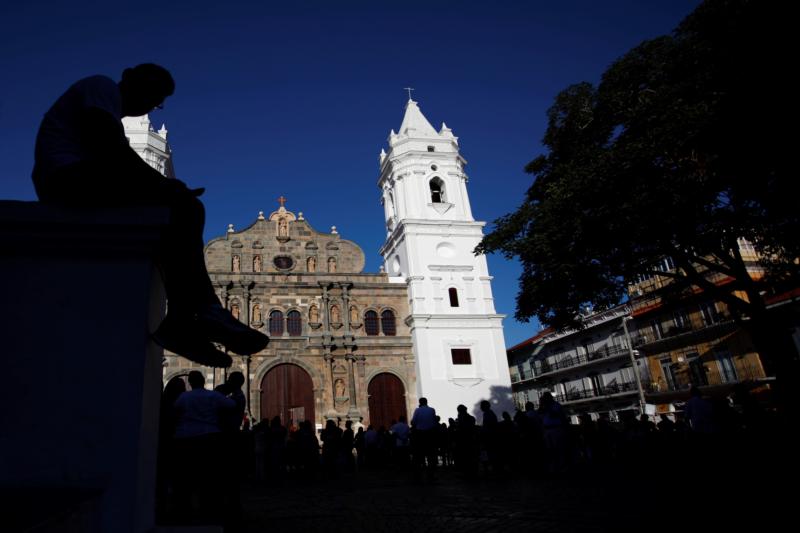 VATICAN CITY (CNS) — As World Youth Day in Panama draws near, organizers said they are prepared to make young people from around the globe feel right at home.

“People are opening their homes to house young people. We were surprised by how the people responded to the appeal for housing. We want all the kids to have a place, a space, a home,” Father Aguilar said.

Father Aguilar, along with Archbishop Jose Domingo Ulloa of Panama, Danubia Allard, the Panamanian foreign ministry’s liaison for WYD, and Miroslava Rosas, Panama’s ambassador to the Holy See, were among the dignitaries and church officials briefing journalists Dec. 11 on the upcoming event and their preparations to welcome Pope Francis and the myriad of young men and women expected to attend.

The pope’s visit to Panama Jan. 23-27 will be his 26th trip outside of Italy and his third World Youth Day.

The pope’s meetings with young people who are unable to take part in the public WYD activities is a response to the Gospel’s call to clothe the naked, visit the sick and comfort the imprisoned, the WYD organizing committee said in a Nov. 20 statement.

Although fewer young people will attend the Panama event compared to past World Youth Days, local church and government officials were optimistic and said they expected some 200,000 young people to attend.

From the United States, by Dec. 19 over 10,000 young pilgrims had registered to attend the events in Panama and the number continues to climb, said Paul Jarzembowski, World Youth Day USA coordinator and assistant director of youth and young adult ministries for the U.S. Conference of Catholic Bishops.

While holding the event in January is challenging for young people in the United States, “this is not the lowest number of pilgrims who have attended a World Youth Day from our country over the past 30 years,” Jarzembowski told CNS.

“Regardless of the final number, I am overjoyed that more than 10,000 young people from the U.S. did say yes to the invitation of the Holy Father to join him in Panama for this pilgrimage of faith,” he said.

Following the pope’s lead in meeting with young people unable to attend the WYD festivities, events are being planned in major cities across the United States to coincide with the gathering in Panama.

Jarzembowski told CNS that U.S. bishops have encouraged local leaders to engage with young people not going to Panama “for some kind of spiritual moment: a celebration, pilgrimage, retreat or simply an informal gathering.”

“No matter how one connects, it is important that this January, every single young person in America is journeying together in solidarity with those pilgrims who are making their way to Panama,” he said.

Archbishop Ulloa told journalists that by early December, 47,000 young pilgrims from 155 countries had registered for the event, while 168,000 others are completing the registration process.

He also said that an estimated 37,000 volunteers have signed up to help assist young people attending the event.

“As a church, as a country, we are prepared to welcome thousands of pilgrims,” Archbishop Ulloa said.

However, for organizers of WYD, preparations to receive young pilgrims to the country is more than just an exercise in hospitality, they said. It is a means of spreading the Christian message of welcoming those in need.

The plight of Central American migrants making their way to the U.S. border made headlines around the world in November and brought to light the dire circumstances that forces men, women and children to embark on such a treacherous journey.

“I believe that this trip will reverberate in the world, but especially in the area of Central America and it will also shed light not only on the reality that we live, but especially the reality lived by young people: of exclusion, of seeing themselves at times forced to immigrate and look for new paths, as well as the reality of violence,” Archbishop Ulloa told journalists.

He also said that the pope’s presence in Panama will be like a soothing “balm and fresh air for our young people to regain their strength.”

Father Aguilar told CNS that the warmth felt in Panama is not only “climatological but also human,” and he said he hoped people opening their homes to young pilgrims will encourage countries to open their doors to those in need.

“We have to give an example, especially in the case of immigration. This phenomenon is very much present in our countries,” he said. “We must be welcoming so that nobody feels in any way that they weren’t allowed in Panama. It is a welcoming country and it will be an example of welcoming for everybody.”

NEXT: Vietnam, Vatican agree to upgrade diplomatic relations in near future