With a mother’s heart, Mary raises up the abandoned, pope says at Mass 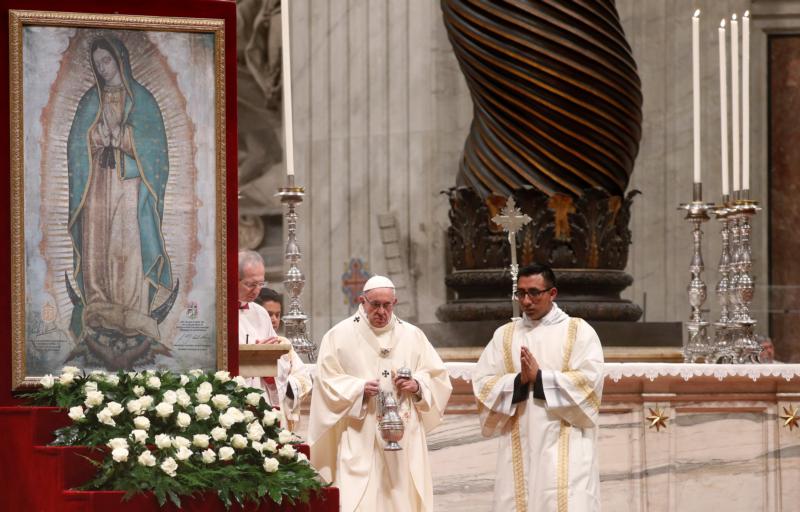 VATICAN CITY (CNS) — Just as she did hundreds of years ago from a small hill in Tepeyac, Mexico, Mary accompanies the downtrodden and the lowly like a mother caring for her children.

Mary “is a woman who walks with the gentleness and tenderness of a mother, she makes her home in family life, she unties one knot after another of the many wrongs we manage to generate, and she teaches us to remain standing in the midst of storms,” the pope said in his homily during a Mass in St. Peter’s Basilica Dec. 12, the feast of Our Lady of Guadalupe.

Processing into the basilica dressed in white, the symbol of purity, Pope Francis made his way to a replica of St. Juan Diego’s tilma, which bears the image of Mary, who appeared to the indigenous saint in 1531. The pope stood before the image, bowing reverently and incensing it three times.

In his homily, the pope reflected on the reading from St. Luke’s Gospel, in which Mary hastily visits her cousin Elizabeth, and subsequently proclaims “the greatness of the Lord.”

Through her Magnificat, the pope said, Mary teaches all Christian men and women not only the importance of praising God in the midst of joy, but also how to accompany and walk with others.

From houses and hospital rooms to prison cells and rehabilitation clinics, he added, Mary continues to utter those words she said to St. Juan Diego, “Am I not here who am your mother?”

“In Mary’s school, we learn to be on the way to get to where we need to be: on our feet and standing before so many lives that have lost or have been robbed of hope,” the pope said.

Mary, he continued, also teaches her children that problems are not solved with immediate responses and magical solutions, nor through “fantastic promises of pseudo-progress that, little by little, only succeeds in usurping cultural and family identities.”

Instead, Christians learn from her the true joy that comes from loving God and neighbor unconditionally and to guard “the sense of God and his transcendence, the sacredness of life” and respect for creation, the pope said.

Mary, he added, taught humility by lifting up lowly people, like St. Juan Diego, by giving them a voice and “making them the protagonists of this, our history.”

Pope Francis said that “through Mary, the Lord refutes the temptation of giving way to the strength of intimidation and power” and instead gives dignity to those who have been cast aside.

“The Lord does not seek selfish applause or worldly admiration. His glory is in making his children the protagonists of creation,” the pope said. “With the heart of a mother, (Mary) seeks to raise up and dignify all those who, for different reasons and circumstances, were immersed in abandonment and obscurity.”

NEXT: Strasbourg bishop speaks of ‘lucid madness’ after terror attack